A Sunny January Day in Ironbridge 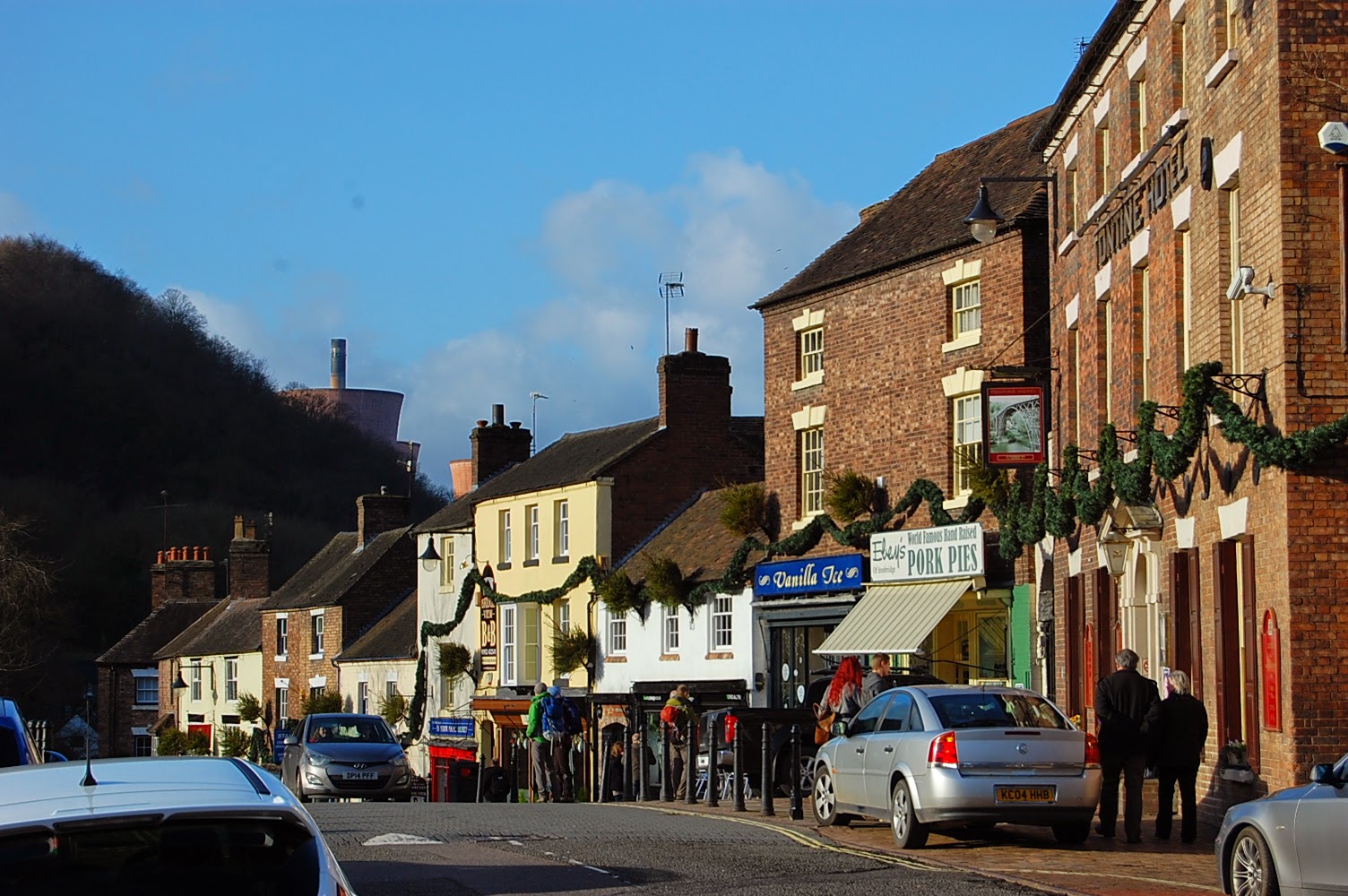 Hello and welcome to Ironbridge.  We love to walk along the pavement by the River Severn here as it flows along the bottom of Ironbridge Gorge and as the sun was shining, we took the camera with us.  Here are the shops, festooned for Christmas, and can you see the cooling towers of the power station?  I know that doesn't sound very picturesque, but the site was sensitively chosen and the towers, built in the 1960s, were built of concrete tinted with a red pigment so they almost look like bottle kilns.  I am fond of them, peeping out from behind the trees around a bend in the river. They are the full stop at the end of the industrial history of this area, which is often referred to as the cradle of the industrial revolution. 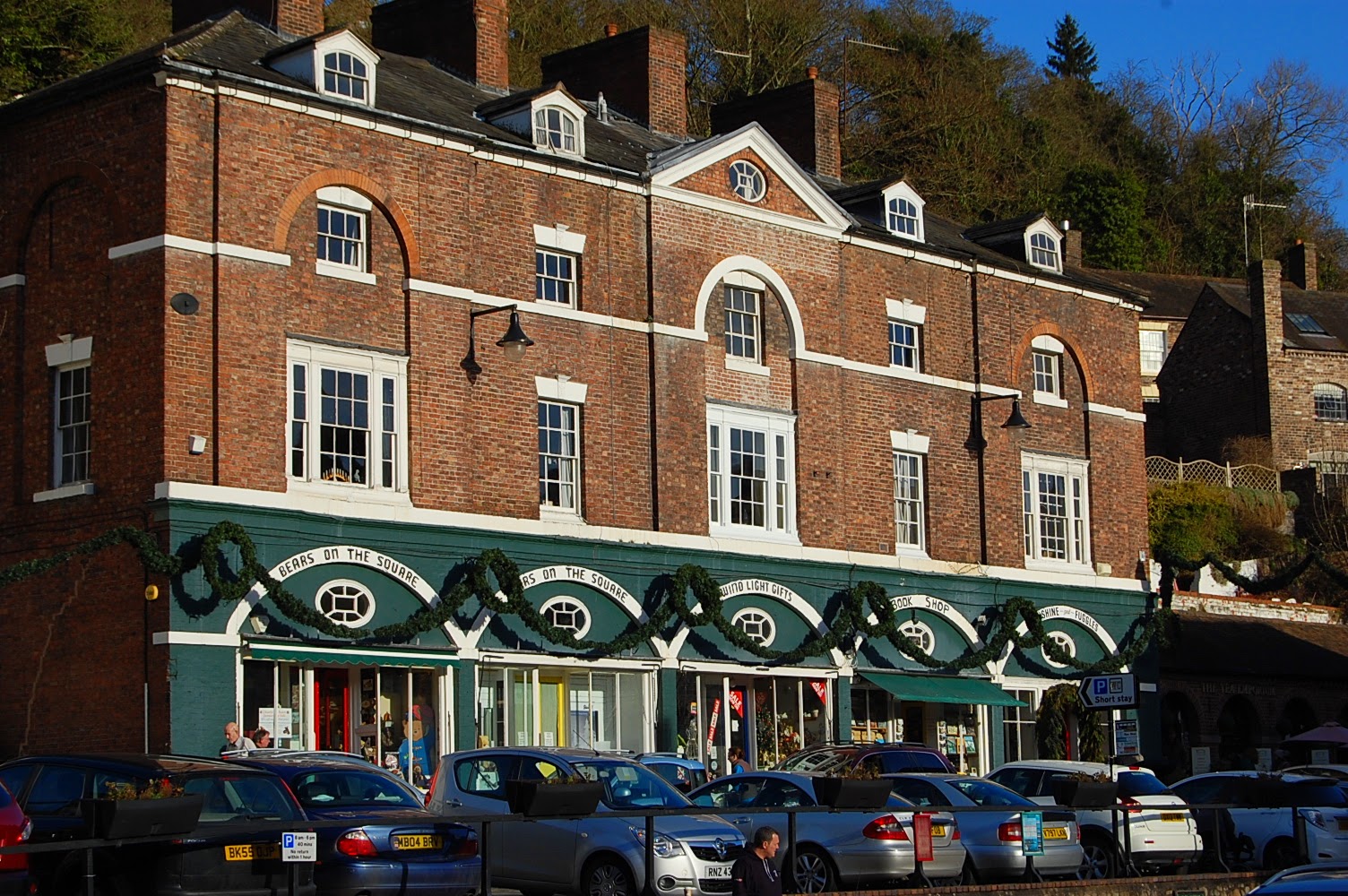 The village didn't exist when the first iron bridge in the world was built here in 1779 and as the crossing over the river became popular, the settlement grew.  The buildings along the riverside are a mixture of little shops, restaurants and cafes, offices and houses.  Every now and then you come across something like this, right by the pavement - 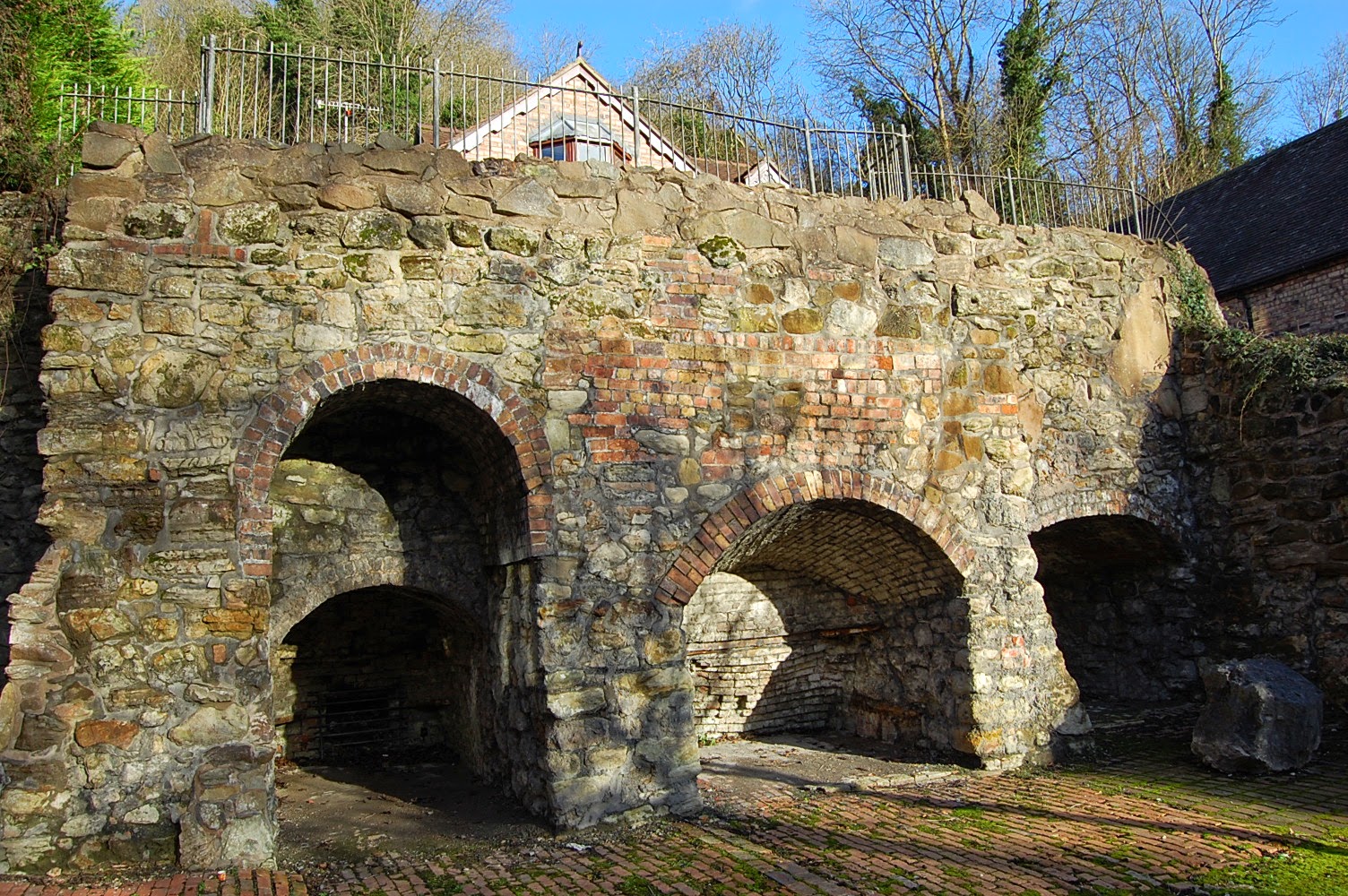 These are lime kilns, built in the mid-eighteenth century and used here for about a hundred years.  The buildings here fascinate me, showing signs of their previous lives.  Look at the "doors" on this pub - 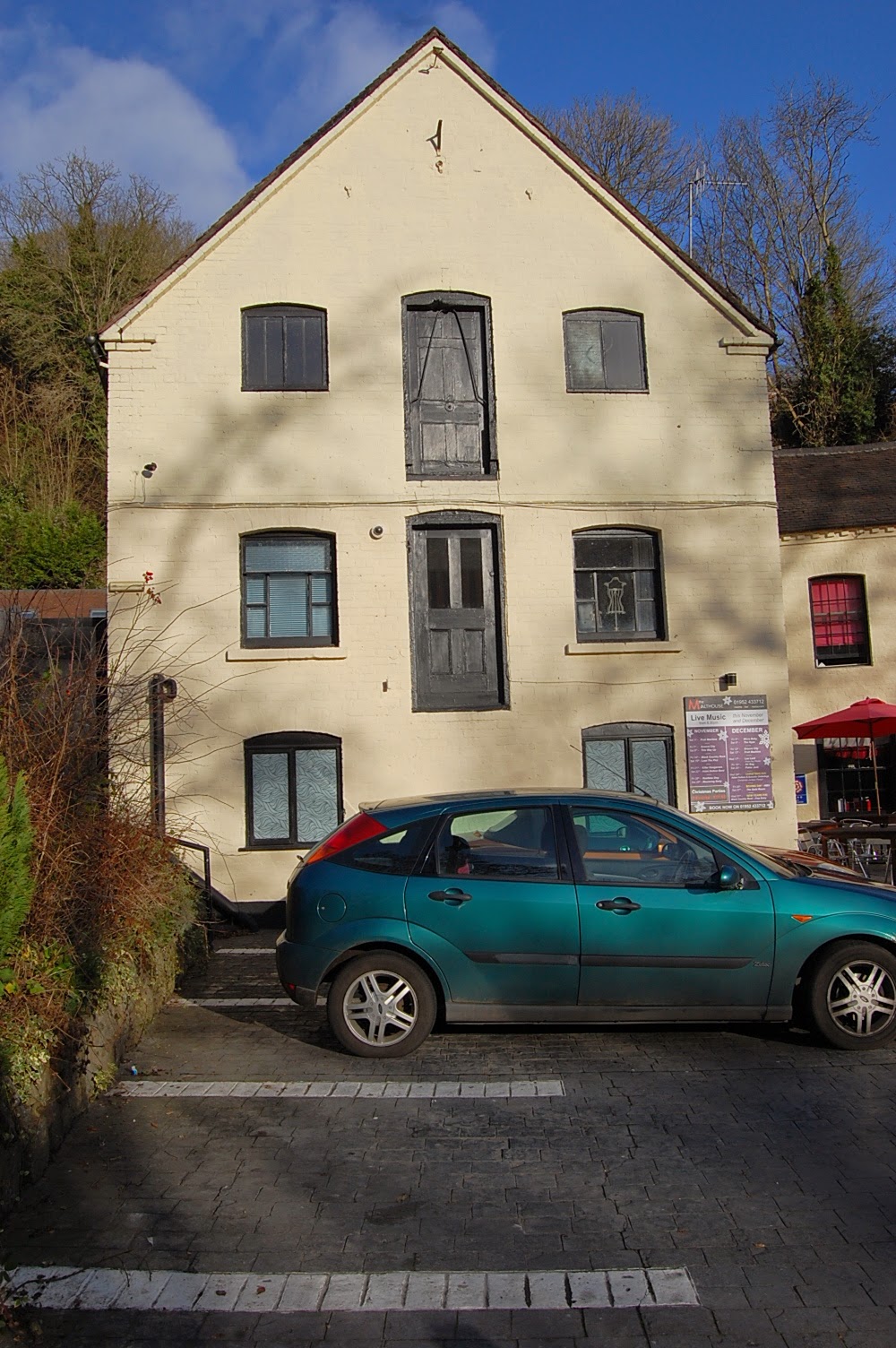 This gift shop is charming - 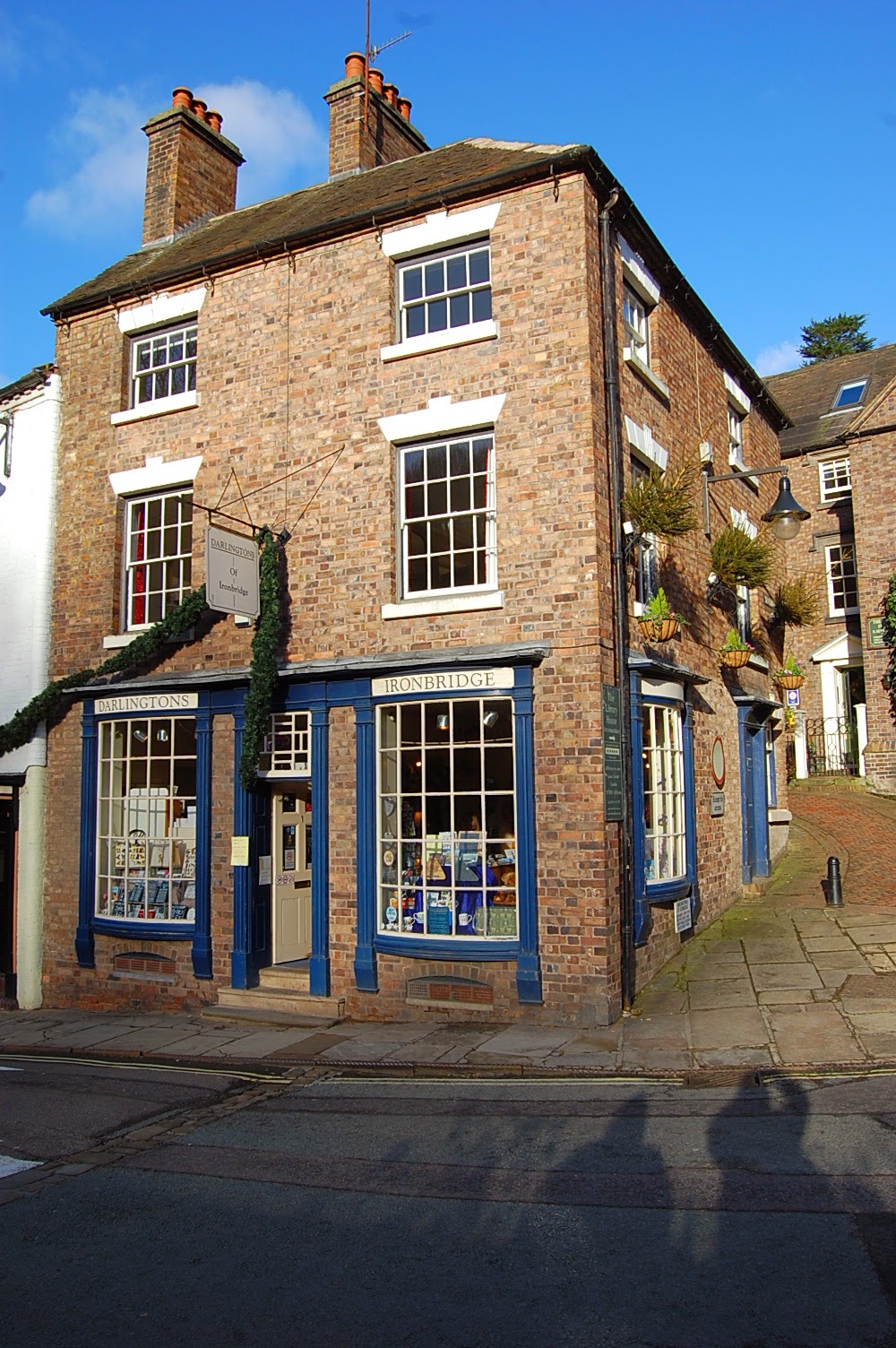 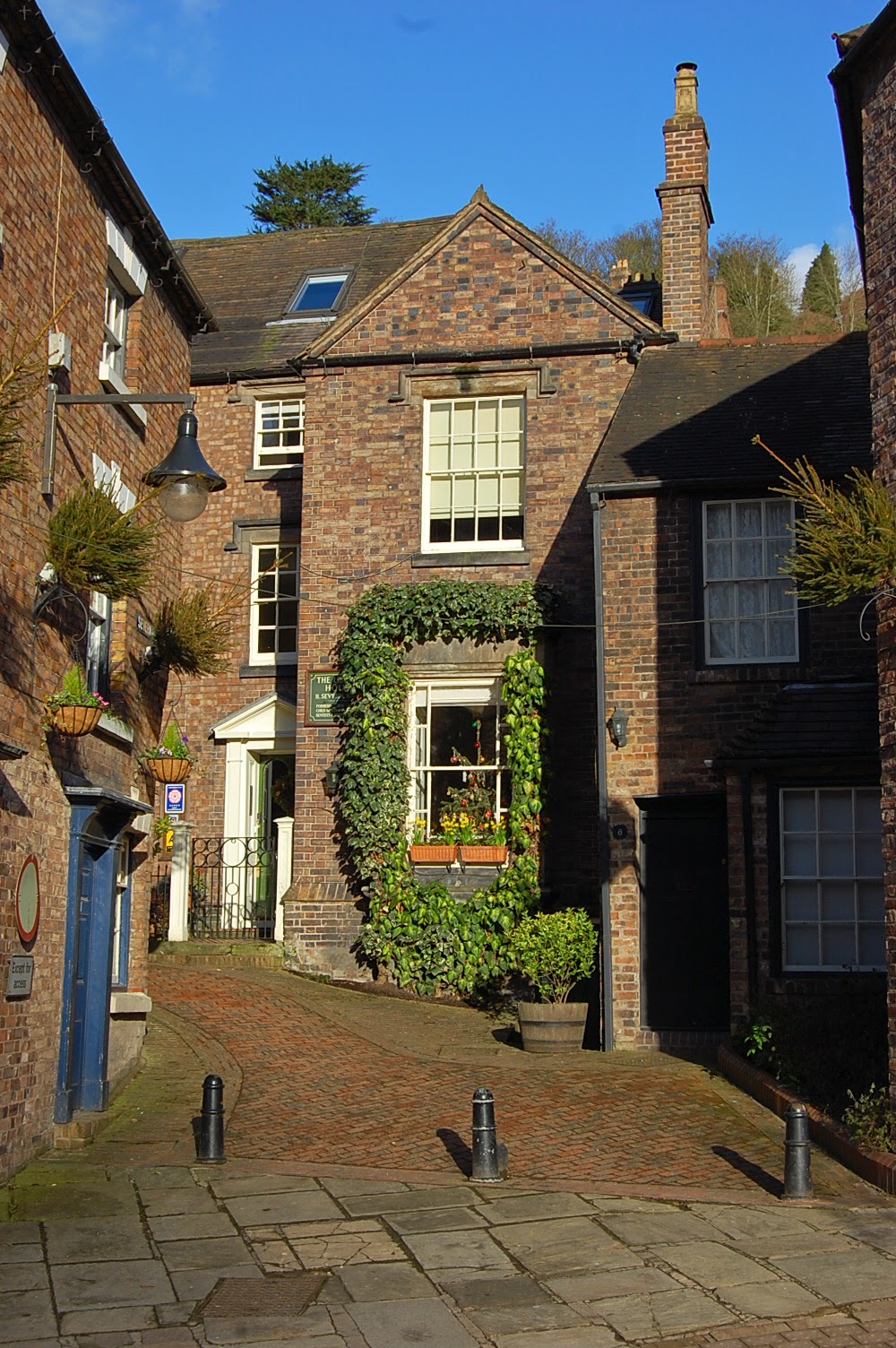 ﻿
Behind these buildings, houses cling to this side of the gorge, above and below St Luke's Church - 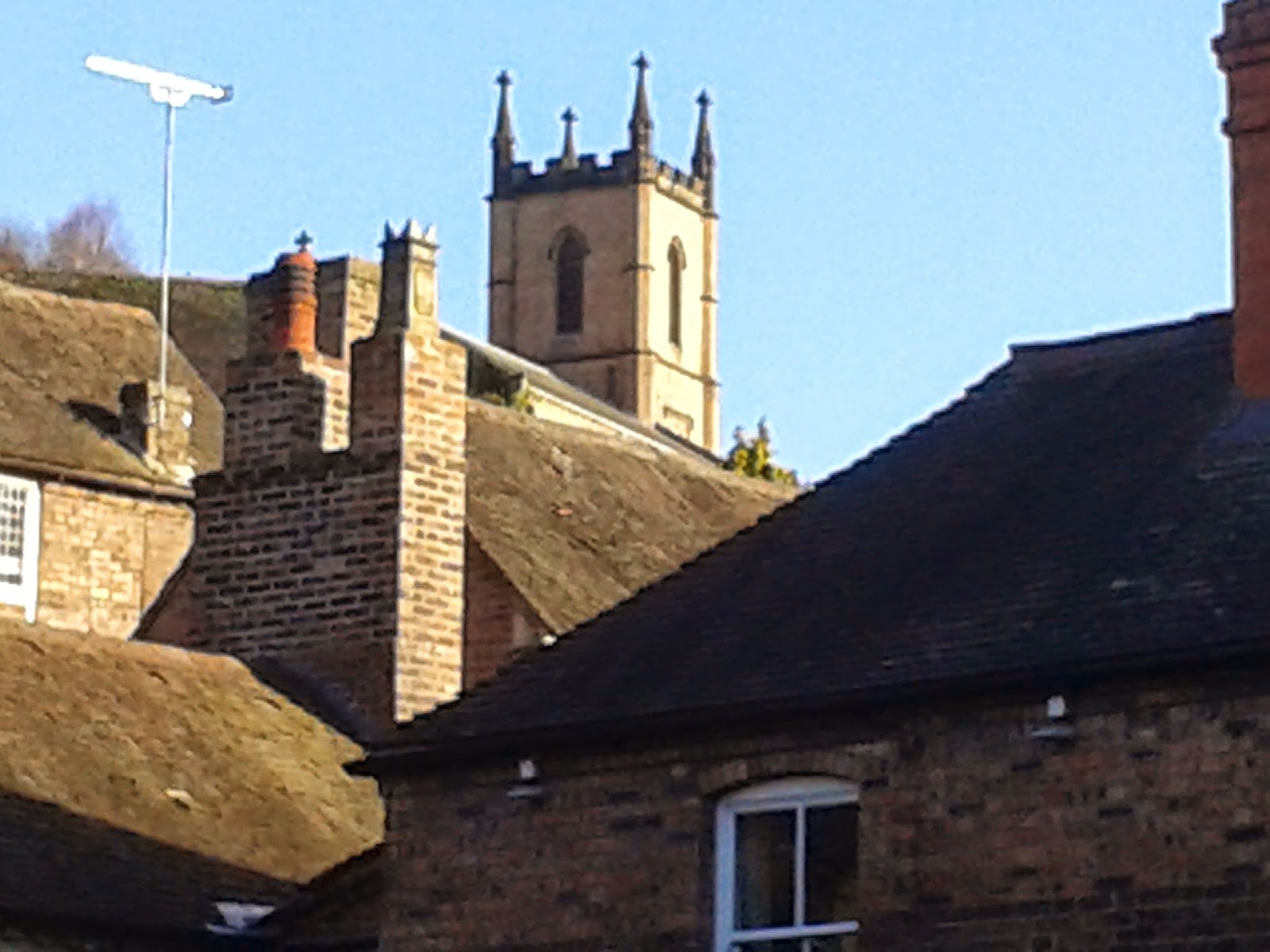 We strolled down a path which took us behind the restaurants and houses to the river itself, where we found this old shed - 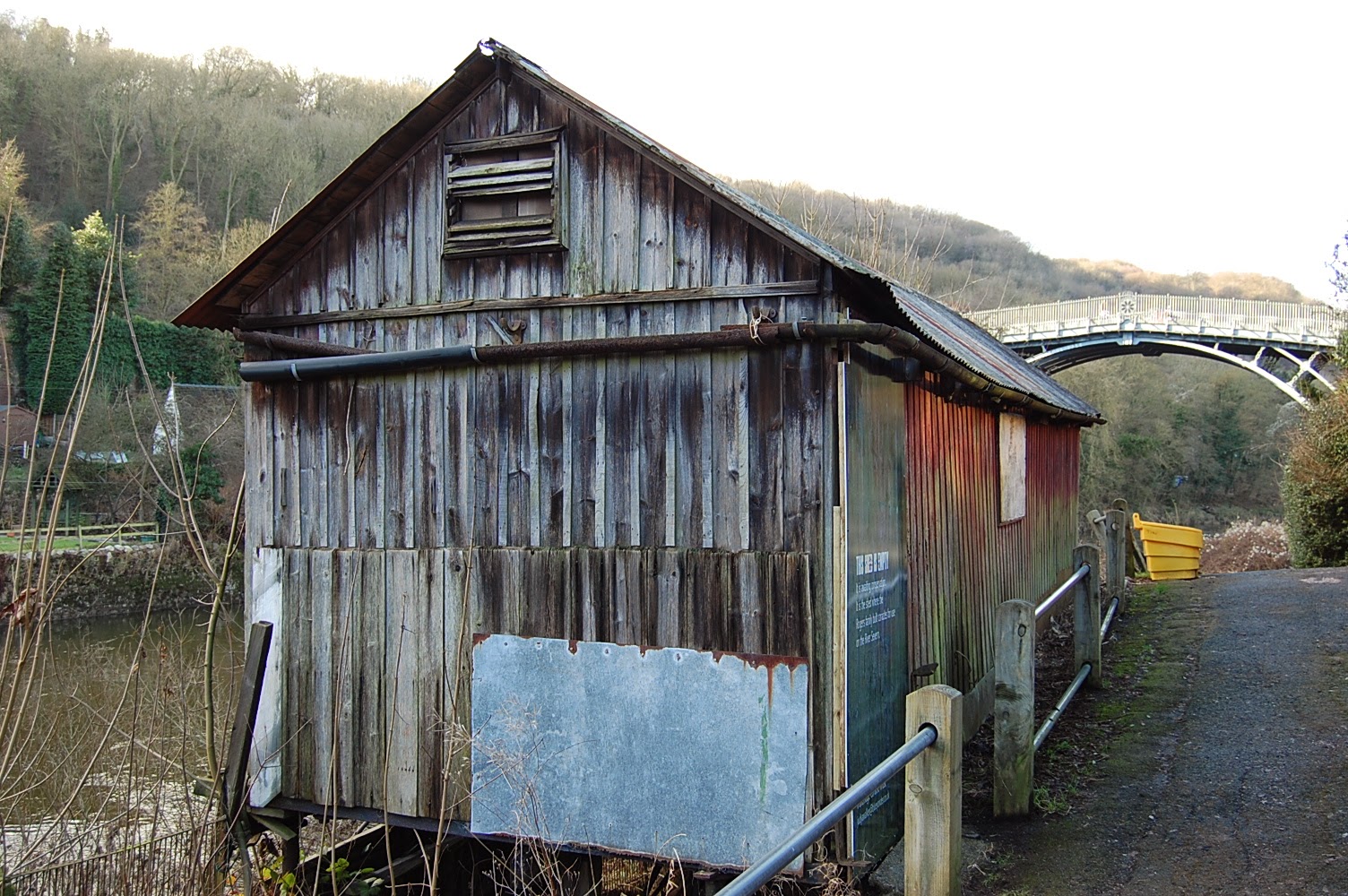 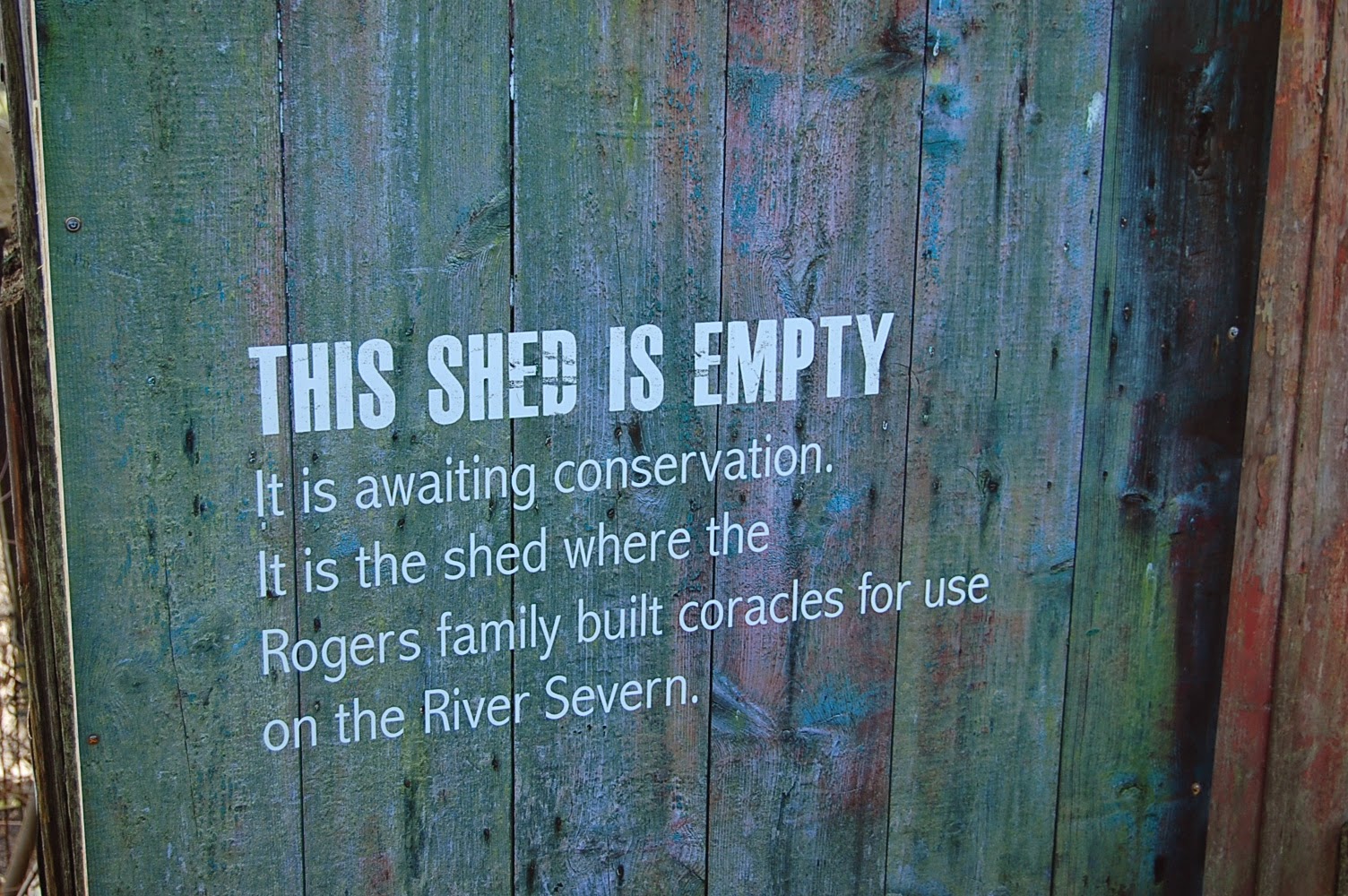 Eustace Rogers died in 2003, aged 88, and was known as the last coracle maker on the River Severn, something of a local celebrity.  His father and grandfather before him made coracles here.  There is a coracle regatta here every August so you would have thought that Ironbridge would be keen to preserve this historical hut, especially as the area trades on its industrial heritage, but it seems not.  Just behind the shed in the first photo you can see the Iron Bridge itself.  Fancy a better look? 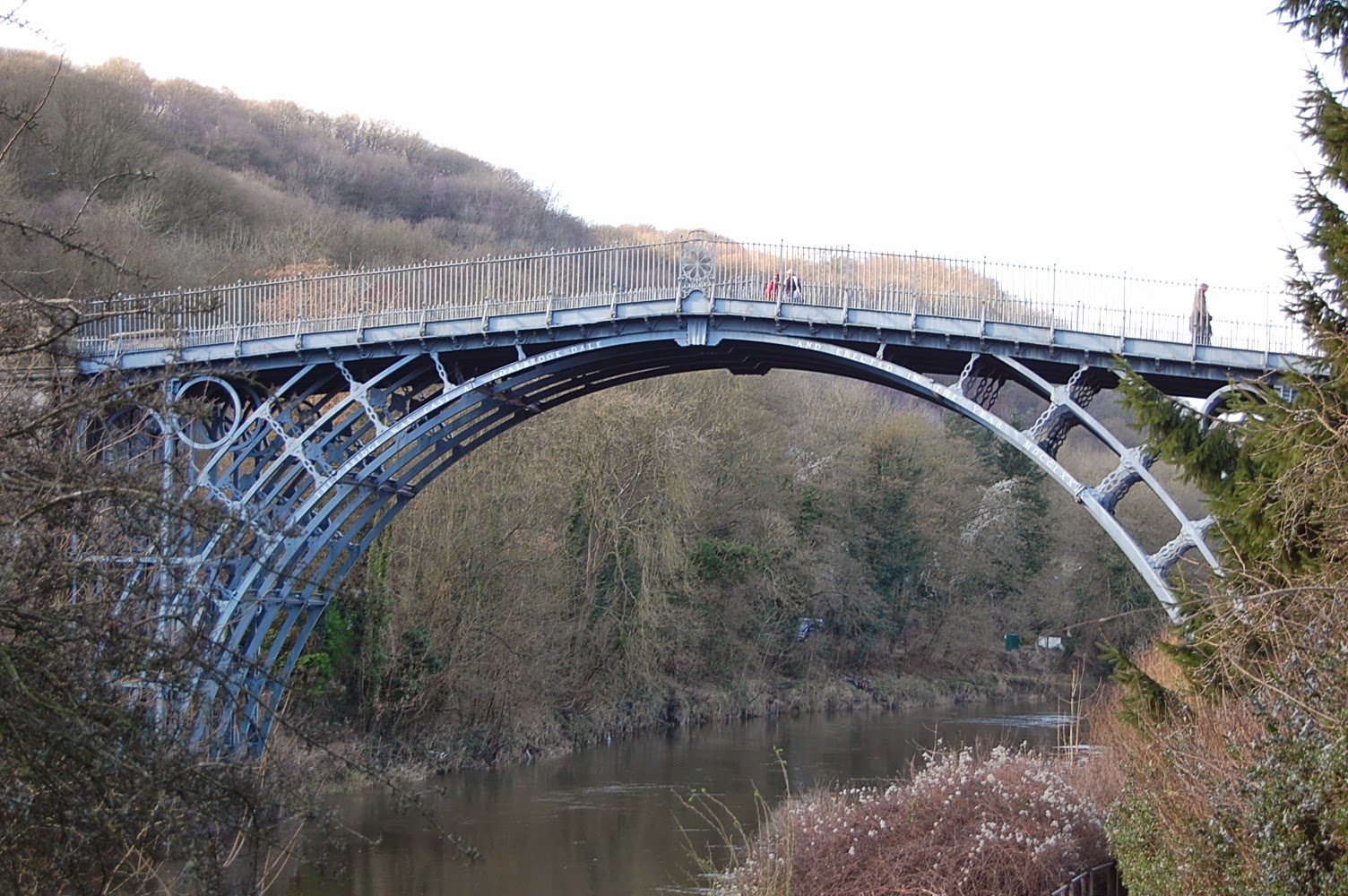 ﻿
My favourite bridge in the world, for obvious reasons, opened on New Year's Day 1781 and closed to traffic in 1934, although it is open to pedestrians.  I was annoyed that the sun couldn't climb a bit higher here and clear the sides of the gorge.  I am always a bit nervous about being beside the River Severn here: it flows fast and the currents are strong, it doesn't feel at all friendly and I am full of admiration for the bravery of the kayakers we sometimes see here. 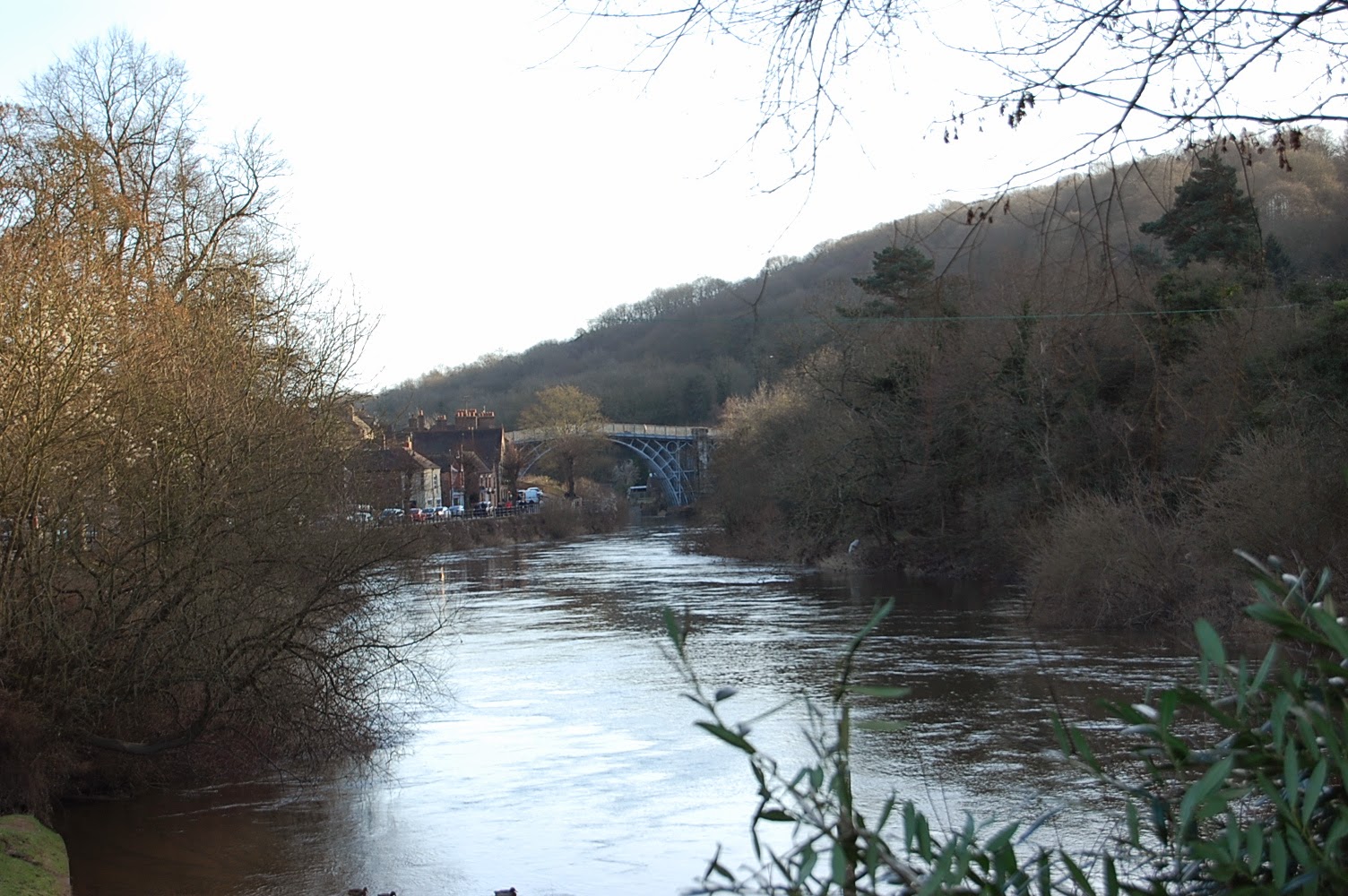 We had a lovely leisurely morning here, walking along the streets, lingering on the bridge to drink in the views, looking at the buildings and browsing in the shop windows.  Other than the £2.80 we paid for the car park, it was a free outing UNTIL we got to Eley's of Ironbridge, famous for its hand-raised pork pies for more than fifty years.  You can even order a pork pie wedding cake (prices start at £90 for two tiers)!  Well, it would be rude not to patronise an independent business, wouldn't it?  And no, we didn't order a wedding cake. 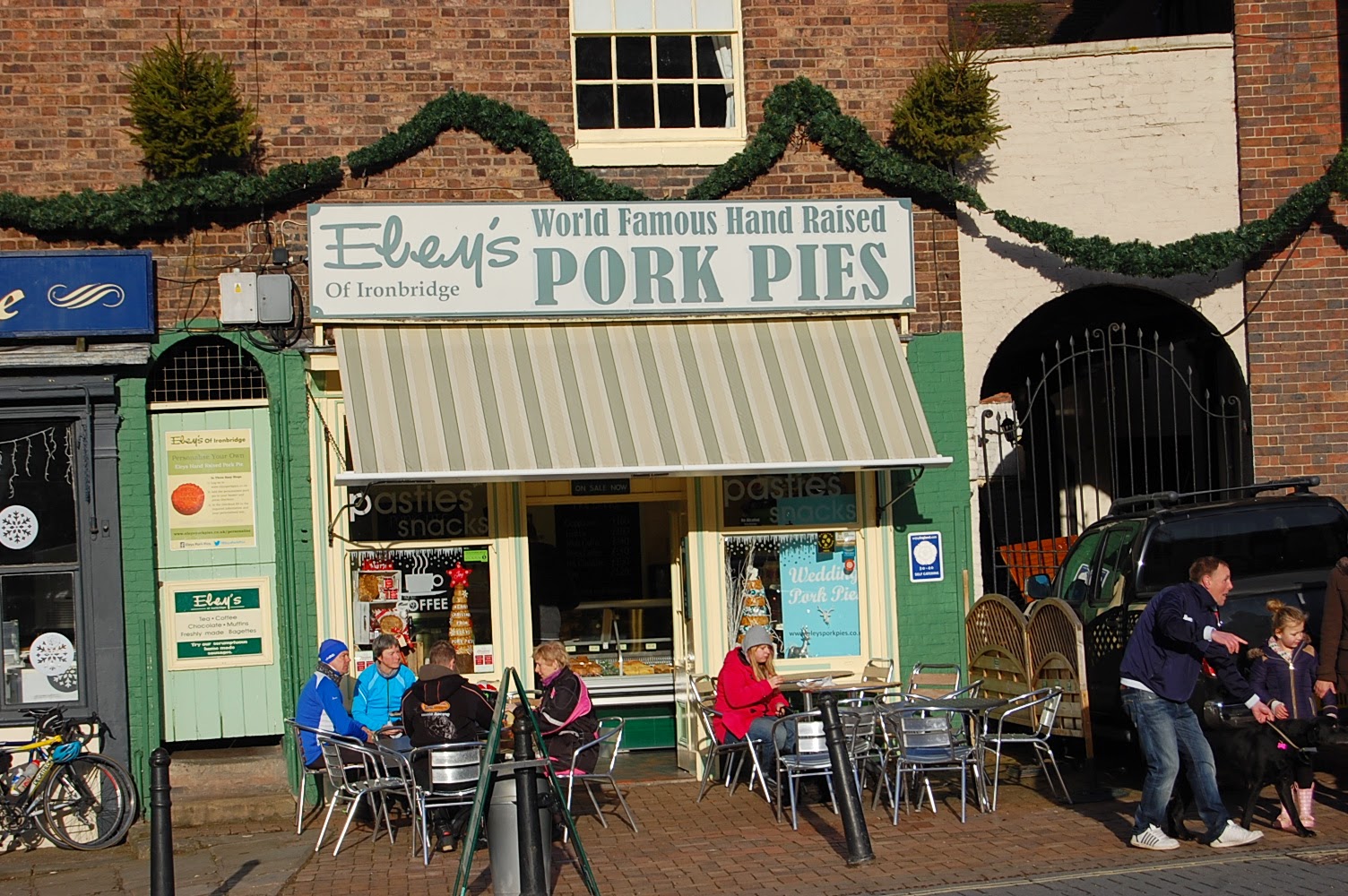 ﻿
We are getting back into the swing of things here now, the Best Beloved is back at work and The Mathematician has gone back to university.  The Christmas decorations have been packed away and I am feeling a little forlorn.  Still, there are some birthdays to look forward to soon around here...Take care.
﻿
Love, Mrs Tiggywinkle﻿
﻿
﻿
Posted by Mrs Tiggywinkle at January 06, 2015