Hello, thank you for calling in and thank you for all the comments you left on my last post.  I was a little nervous about "coming out" as a Eurovision fan and it is immensely reassuring to know that not everyone thinks I am bonkers.
This is half term week in England so the schools are closed and there is no work for the Best Beloved.  We had planned a little camping trip but the weather is far too cold - it's perfectly doable in the daytime, we can wear lots of layers and we have a gas heater for the tent but cold nights are difficult, you can't sleep if you are too cold, you spend most of the night adding layers of clothing and huddling and the next day you are tired, aching and miserable, so those plans are shelved until the weather warms up.
Instead, yesterday we went to Anglesey for the day.  We left at 8am, stopped for breakfast on the way and just before 11.30am we reached our destination: the South Stack Cliffs RSPB Reserve.  This is a Site of Special Scientific Interest because of its geological and biological features, but mainly we come here to see the birds.  There are more than five thousand guillemots and razorbills making a great deal of noise on the cliffs at the moment.  They arrive in the early spring to lay their eggs, which are conical in shape so that they don't fall off the narrow ledges, and by August they are gone, out in the ocean somewhere until next spring.  We come here every year to see them.  Here you are - 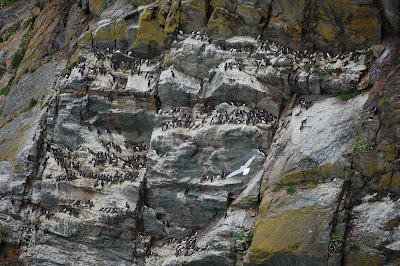 There are also puffins here, but in order to see them we would have had to descend 200+ steps and then climb back up them, and I have seen plenty of puffins before so we didn't bother.  But we did see fulmars, gulls and a pair of choughs, which pleased me greatly.  There are only five hundred pairs of choughs in the UK and twelve of them are here.  An RSPB volunteer explained to me that the reserve is maintained specifically to support the choughs: non-intensive grazing encourages the insects they feed on.  They don't need to do anything to support the auks, there are plenty of them and they like the cliffs.
Ah, the cliffs. According to the Countryside Council for Wales they are "some of the most magnificent exposures of folded sedimentary rocks in Great Britain".   They really are spectacular and the added bonus at this time of year is the flowers. 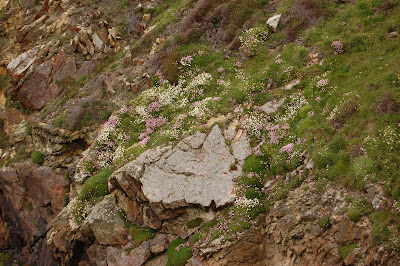 The South Stack lighthouse is an iconic image of Anglesey, it sits on a little rocky island called Ynys Lawd and you  can reach it by descending more than four hundred steps hewn out of the rock and crossing a bridge.  You can find out more about it here.  The low buildings next to it are the houses where the lighthouse keepers and their families lived before the lighthouse became fully automated in 1984 (it is now controlled from the Trinity House Operational Control Centre in Harwich in Essex).  Can you see that the light is on in this picture? - 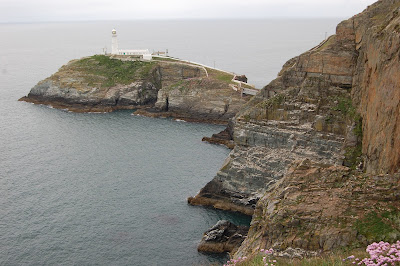 That's because the weather wasn't great.  We left home in the sunshine and I had packed suncream and sunglasses but when we arrived I was very glad that I had also packed a scarf and wristwarmers.  It's so high up that it's always windy there but it was also dull and overcast and after visiting the RSPB information centre in Ellin's Tower and spending an inordinately long time watching the birds through our binoculars we headed to the café for a pot of tea and a piece of cake while the rain fell outside.  (The cake here is very good.)
We then drove round the coast to Porth Dafarch, a lovely cove even in the wind and rain.  I love being on the beach whatever the weather, I am just glad to be there.  This is a Blue Fag beach so it's very clean, very safe and has good amenities.  The water there is tested 20 times over the course of the summer season and in fact while we were there the water engineer arrived, put on a pair of waders, walked out into the sea and took a sample of the water.   We walked out along the headland and looked back - 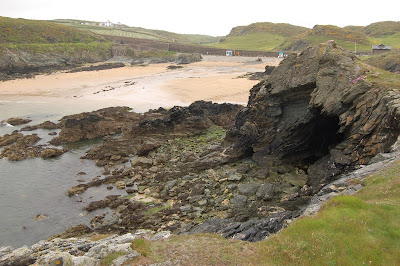 The rocks here are fascinating - 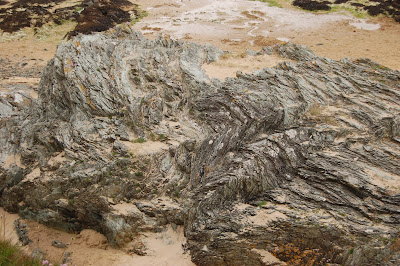 I looked at this lichen-covered one beside the path and asked the Best Beloved to photograph it.  "It's quite interesting," I said.  He laughed.  (At this point I should let you know that I didn't take any of the photos in this post, he took all of them and would like you to know that the copyright belongs to him!  I should also let you know that he selected the title of this post.) 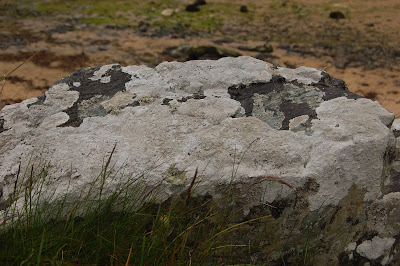 Up on the headland, the ground was covered with beautiful blue spring squill. 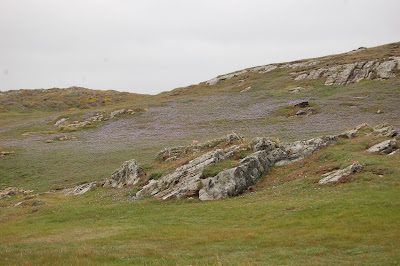 By the time we got back to the car it was really raining quite hard so we decided to head for home.  On the way we took a detour up the Great Orme at Llandudno.  The Best Beloved told me that when he worked in field sales, more than twenty years ago, if he was in Llandudno he would drive up to the top of the Great Orme to eat his packed lunch because the views are so spectacular.  But this time, we didn't go for the views, we went for the wind.  It was so windy that we had trouble opening the car door, so windy that we could open our coats, lie back and "rest" on the wind, so windy that the raindrops really stung our faces as they hit us horizontally.  Once we were up there with my parents and the wind literally blew Dad's spectacles off his face!  I know, we are bonkers after all.  We only did it for a few minutes before wrestling the car doors open and collapsing inside, laughing.
We arrived home shortly after 6pm and obviously, because we are English, the first thing we did was put the kettle on.  Later we had a Chinese takeaway and a bottle of wine.  It was a perfect day.
See you soon.
Love, Mrs Tiggywinkle x
Posted by Mrs Tiggywinkle at May 28, 2015