Five on Friday (on Saturday!)

Hello my lovelies,  thank you for popping in.  Thank you especially if you left a comment on my last post - particularly you, Bronwyn.  You set me athinking and today's post is a response to your comment.  I am also joining in with Amy at Love Made My Home so a special welcome if you have popped in via her blog.
When I began researching my family history The Teacher was at primary school and The Mathematician was at nursery four mornings a week.  I had two jobs and worked three mornings, four evenings and one night a week and the Best Beloved was a full-time student, so I really didn't have much of the elusive "spare time".  However, the point about family history is that you can take it as fast or as slowly as you need to, it won't change while it waits for you, and that the amount of it that there is to be found will expand to fill the time that you have and beyond.  So if you are thinking about it, here are five tips to set you on your way:
1.  Talk to your elderly relatives
I was 35 years old when I began my research and many people told me that I was "about twenty-five years too young" and that I should wait until I retired.  They were wrong: my grandmother was still alive and able to tell me lots of things about her family, and I wrote them down.  A year later she had the first in a series of small strokes which would soon take away her memory and five years later, she died.  Had I left my research much later, I would not have had all those valuable clues.  So talk to your oldies, and write down what they tell you - I have dedicated research notebooks.  Ask them who the people are in those old black and white photos - my mother-in-law threw away several Edwardian photos after her mother died because she didn't know who was in them.  My lovely Aunt Anne sent me several pages of typed information including things which her grandmother, born in 1871, had told her and these clues have been invaluable.  No snippet of information should be left unrecorded. 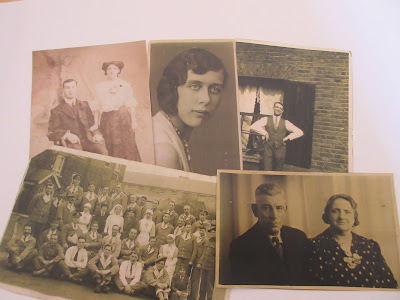 2.  Do not believe everything your elderly relatives tell you!
You should regard this oral information as clues, signposts if you like, but nothing is factual until you have the documentary evidence.  My grandmother told me that her middle name was May because her mother's middle name was May, but when I eventually got hold of a copy of her mother's birth certificate it showed that her mother's middle name was definitely Mary. My aunt told me that she had been told that her grandmother's brothers attended Westminster School and sang in the choir at Westminster Abbey.  This turned out not to be true, but ten years later I discovered the existence of Westminster Abbey Choir School, a different establishment, and contacted them.  It turns out that it wasn't her grandmother's brothers but her grandmother's uncles, a generation back, who had sung in the Abbey Choir, and I now have copies of the documents which prove it. 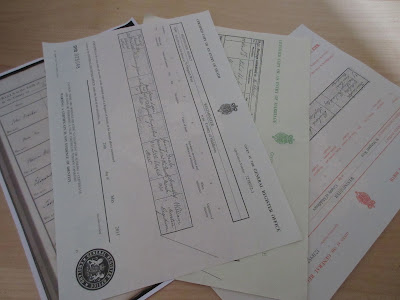 3.  Always allow for human error
I was watching a tv programme a few months ago and a woman said that tracing her family tree was her hobby.  The presenter asked her if she goes to record offices and looks up old documents and she replied that the modern way to do it was to use internet sites to link up with other people to whom you are related and to share information to build your tree.  I was horrified.  Really.  The problem with that is that people make mistakes.  I have been the grateful beneficiary of other people's work but I never rely on a transcription.  I use it as a signpost to an original document - or a facsimile of an original document - but I always check out other people's information.  Similarly, people sometimes make assumptions and present them as facts: when I began, I spent a long time researching one hundred years' worth of genealogy which took me into Cornwall.  Now, I love Cornwall and was thrilled that it was the land of my fathers, but sadly, it turned out not to be the case because my starting point, a copy birth certificate I was given, was incorrect: right name, born in the right year, but wrong person, and a comparison with other contemporary documents (census returns) would have borne this out before I got so far.  I cannot overemphasise how important it is to check the documentation. 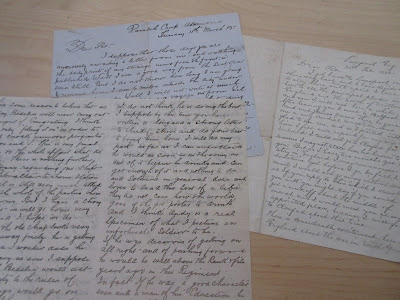 4.  Use the internet and think outside the box
This hobby can become very expensive, but you can find free information: look at the success I had here with a straightforward Google search, and I always look up the towns and villages my ancestors lived in because it sets the scene.  Sometimes you strike gold and discover that somebody has transcribed the parish registers and uploaded them - but be wary and remember Tip Number 3, above!  I have an ancestor who moved his family from London to Limerick in the 1870s and I just couldn't work out how or why.  A letter suggested that he worked for the Army Clothing Company but my search for information about this company proved fruitless, so in the end I sent an email to the Limerick City Museum asking for help and I received a response the following day suggesting that he probably worked for Tait & Co. who had factories in London and Limerick and manufactured army uniforms.  I LOVE free information. 5.  Keep paper records
Now then, I know that this is a bit controversial in this modern age, but I keep paper records because technology can fail (how many of us have had laptops which have "died"?) or become obsolete so that your work become inaccessible.  When I visited the Bodleian Library in Oxford a guide told us that some years ago there had been a project to digitise the contents of the library.  The books, some of them very old, had been copied and stored on...floppy disks, yes, the big old ones which really are floppy!  They are now completely useless because nobody has the equipment to read them.  So, I learned my lesson and now keep paper copies in lever arch folders.  I have a lever arch folder for my father's family, another for my mother's family and a smaller folder for one particular branch of my mother's family which I am researching in a broader context.  If the computer catches a virus or an elephant tramples it to death, my information is safe (and if the house were to catch fire I would scoop up my three folders along with my photo albums). 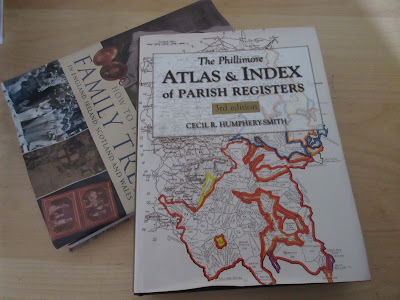 So there you are, five tips for family historians.  I promise there will be no more family history here until July (it's so difficult to contain myself!).  If you want to see who else is joining Five on Friday do pop over and have a look here.
Love, Mrs Tiggywinkle x