Hello, thank you very much for calling in here.  The weather continues to be extremely disappointing, so much so that a little seaside camping trip that the Best Beloved and I had planned was cancelled.  We can cope if it rains while we are camping, that's really not a problem, but we don't like packing the tent away while it's wet and the Best Beloved decided that for only a few nights, it really wasn't worth it, so we didn't go.  Harrumph.
However, last week we did get away to the south coast of England, to Hampshire, for a lovely family party to celebrate a special woman's 50th birthday.  The children stayed with their aunt and uncle but there wasn't room for the Best Beloved and me as well.  Unable to afford the exorbitant price of hotel rooms in/near a seaside resort at this time of year and with the only nearby campsite unsuitable (no toilets or washing facilities!), we had resigned ourselves to the fact that we would have to go there and back in a day, at least seven hours' driving, when my very dear Yorkshire-based friend suggested that we stay in her late mother's empty house in Middleton-on-Sea in West Sussex, about thirty miles away.
This arrangement worked out very well indeed.  My friend's thoughtful sister, who lives nearby, left milk, bread and butter in the fridge for us and made up the only bed left in the house.  Towels and bedding were there for us.  All we were asked to do in return was to feed the fish in the garden pond and the wild birds.  I really do have the best of friends, don't I?
We arrived the evening before the party and although we didn't know where the sea was, the sound of seagulls and the smell of seaweed on the shore as soon as I opened the car door let me know that it wasn't far away.  We unpacked the car, sussed out the house and then hopped back in to drive to the shore, having been advised by my friend that it wasn't really in walking distance.  We fancied a stroll along the beach and then a nice cold drink in  a pub.  Off we went with map in hand, to find the sea.  It was SOOOOOOOOOO frustrating: we knew where it was but we couldn't get to it.  All the roads leading to the sea had signs up saying things like, "Private Road, no parking, no access to the sea".  There were double yellow lines on the public road, so no parking there either.  We found a footpath on the map but when we got there, it had been built over!  It really wasn't very friendly and we got the definite impression that visitors were not welcome.  After driving around for an hour, AN HOUR, and it's a very small place, the Best Beloved went into the local shop and asked for directions (I know, practically unheard of, he's a man!) and was met with the reply, "I don't know, I can't afford to live around here!".
Eventually, we found somewhere legal to park and walked down the lane to the sea.  The beach is shingle but the tide was a long way out, revealing a vast expanse of firm sand.  There was a bench on the beach but it was occupied by two men with a carrier bag full of alcohol, speaking to each other loudly and animatedly in a foreign language, except for the swear words, which were definitely English.  We walked down onto the sand and stayed awhile.  The Best Beloved played with his camera while I took deep breaths, drawing in the salty air, drinking in the shimmering light, listening to the gulls overhead, the scent, taste, sight and sound of the seaside.  It's a place where I always love to be.
Eventually, we walked back to the car.  We decided not to go to a pub for a drink after all - if Middleton-on-Sea doesn't want to welcome visitors then I didn't feel minded to contribute to the local economy.  And we had spent so long getting to the beach that it was getting late.  We stayed for two nights and we had a lovely time.  Here are some photographs. 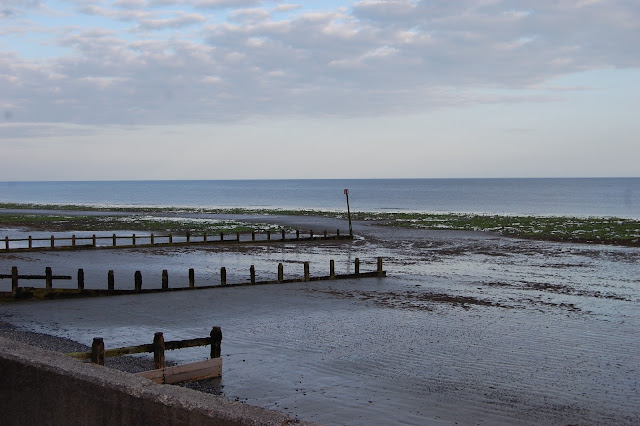 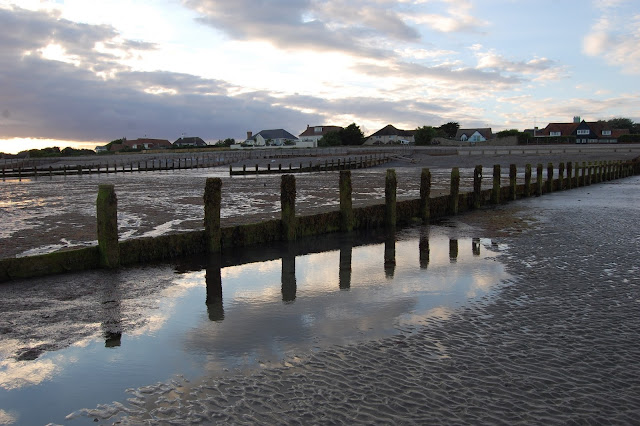 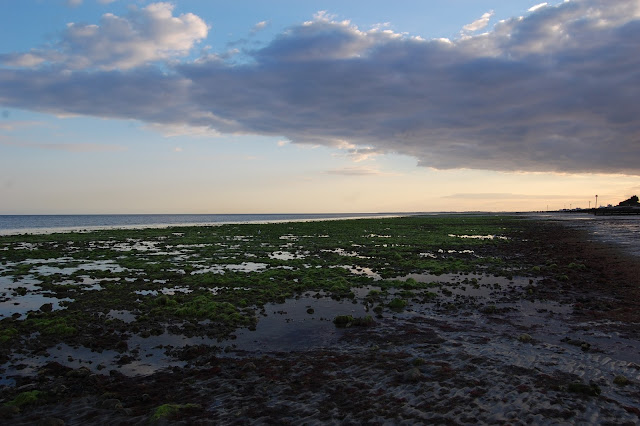