Hello, thank you for calling in.  It is a fortnight since I promised to tell you all about the Shrewsbury Folk Festival and I have tried and tried but I just haven't been able to find a way in to writing about it.  It's most peculiar.  I thought I might write this post chronologically, like a diary entry, but the words came out in a very mundane way, and this festival is certainly not mundane.  Then I thought I would describe the different elements of it, but I don't want to appear to be teaching my granny how to suck eggs.  I thought I might "review" the performers I saw, but there is so much more to the festival than the artists so that seems inadequate.  So let's start at the very beginning, it's a very good place to start (as Julie Andrews once sang)... 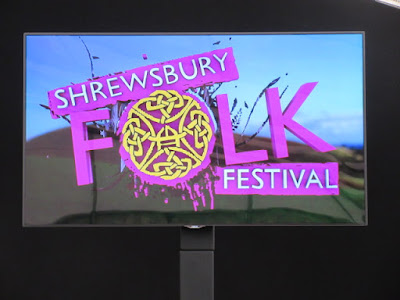 In 2009 the Best Beloved was given a free family weekend ticket to the Shrewsbury Folk Festival because of its association with the school in which he was working at the time.  We knew absolutely nothing about the contemporary folk music world so we went there blind.  Neither had I ever been to a music festival of any sort before - the Best Beloved went to Knebworth in about 1979 but I think the world was a different place then!  So, off we went to our county showground, the Best Beloved, The Mathematician and I, and I really think that I came home a different person.  There were three marquees and one outdoor stage and there was music playing from lunchtime until midnight in each one - we slid into an audience and if we liked the music, we stayed and if we didn't, we left after ten minutes or so.  It was like going to a buffet.  There were craft stalls selling colourful clothing, handmade stationery, leather hats, wooden clogs for dancers, jewellery, tankards, pottery... There were stalls selling food to suit many tastes: vegetarian, Mexican, Thai, Indian, Spanish, crepes, fish and chips, pie and mash, ice creams, smoothies... There was a children's programme of events and a separate programme for young people.  There were workshops for musicians and for singers and for dancers.  There were ceilidhs from lunchtime until midnight and should you prefer to just watch, there were performances of traditional dance - morris dancers, step dancers, molly dancers,  rappers, belly dancers.  Did you know that there are regional variations to morris dancing, that, for instance, Cotswold Morris is not the same as Border Morris?  I had no idea.  Literally.  I felt that I had stepped into a parallel world and I couldn't believe that all this creativity and tradition had been going on and that I had been completely unaware of it.
Now, there were plenty of people dressed in jeans and Regatta jackets (the weather was wet) but there were also many people dressed in colourful clothes - folkie trousers (as my friend calls them), ponchos, knitwear, hats and women of all ages wearing circlets of artificial flowers on their heads, garments which have little to do with either practicality or fashion.  I said to The Mathematician, who has always had a penchant for a head-turning hat,  "I think this is a place where you can be really quirky," and she, with the wisdom of youth, said, "No Mum, this is a place where you can be who you really are."  Isn't she fab?  And you know, she was right.  The atmosphere at this festival is so accepting, so non-judgemental, so friendly.  You can just be who you really are without having to worry about what people think of you.  And because of that, and because everyone's needs seem to be catered for, everyone seems to be relaxed and happy.  The atmosphere really is special.

I came home from that first festival feeling very unsettled.  I thought that it was because I had looked through a window into a very appealing world, and it took me a couple of months to adjust to real life.  We have been back to our folk festival every year since that first one, and it has been the same every time.  I think that its timing at the end of the school holidays doesn't help as we also have to adjust to going back to school and its attendant pressures, and this summer has been particularly difficult because we haven't really had one (a summer, that is).  I think these are the reasons why I have found it so difficult to tell you about the festival, but on the other hand, I am busting to share it, so here are some of the good things.  (I should point out that the weather was very mixed and these photos were taken on different days.) 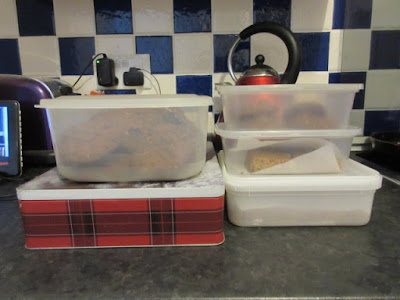 The excitement begins during the week leading up to the festival: the programme arrives in the post and we check out some of the artists on youtube and start planning who we want to see, we sort out our camping gear and I bake.  I like to take treats with us, boxes full of goodies - after all, this is our holiday.  This year I made carrot cake, flapjacks and peanut and cherry cookies, small boxes for The Teacher and Flashman to have in their tent and the larger boxes for the rest of us.  You see, this is a family affair, our girls and their menfolk come too.  At this point I should introduce you to The Mathematician's young man who I am going to call The Beau.  Like the rest of us, he was unaware of the folk music scene and its breadth until we introduced him to this festival in 2013 and he was open-minded in his approach.  He discovered things he liked very much and was surprised, saying to The Mathematician, "I thought it was all going to be that twiddly-diddly stuff your dad plays in the car."  Bless him! 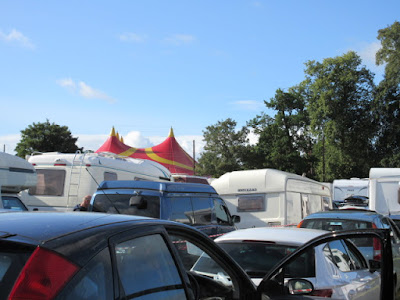 We left early in beautiful sunshine and joined the well-organised queue.  The atmosphere was buzzing with excitement as people got out of their cars and met up with their friends.  This is where we wish we had a camper van as those who do put their kettles on and brew up!  The big marquee beckons us... 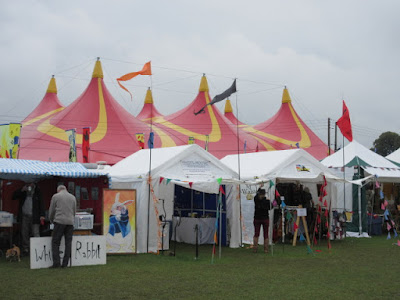 That marquee is HUGE.  It accommodates 4,000+ people, mostly seated but there is a mosh pit at the front.  I am too old for standing gigs and I really appreciate the seats!  In front are some of the craft stalls. 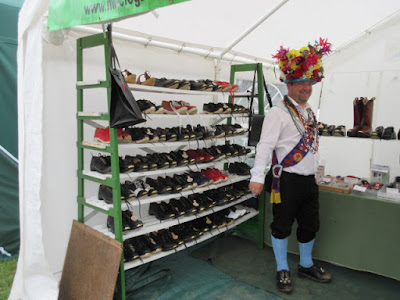 This one sells clogs and the gentleman in the splendid titfer is one of the Earlsdon Morris Men from Coventry. 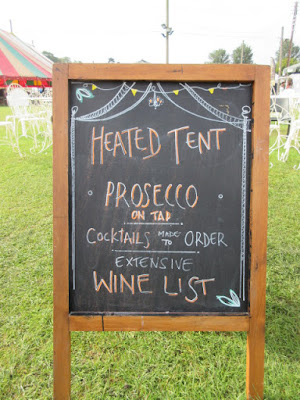 Of course there is a beer tent!  In fact, there are so many beers and ciders on sale that it has been joked that the Shrewsbury Folk Festival is a beer festival with music.  Please don't get me wrong, I am partial to a glass of good beer, but this year there was something extra, something aimed at women like me, I think...a wine bar tent!  As you can see, it had heating and sold cocktails and wine.  Well, it would be rude not to, wouldn't it?  Here's my mojito... 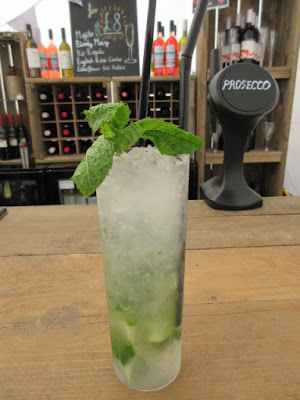 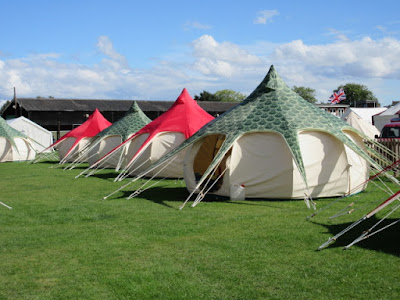 If we had a few hundred pounds to spare we could have stayed in one of these furnished yurts, but we didn't. 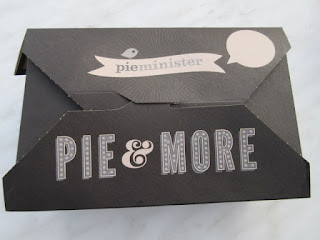 No, we kept the costs down by camping in our own tents and cooking our own food, but we always have one takeaway dinner, a real treat.  Pieminister is not at all exotic but it is of top notch quality and we look forward to it once a year.  Mine was mushroom and asparagus in a white wine sauce with mashed potato, gravy and frizzled shallots.  Yummy, and the perfect comfort food when the weather is dreary. 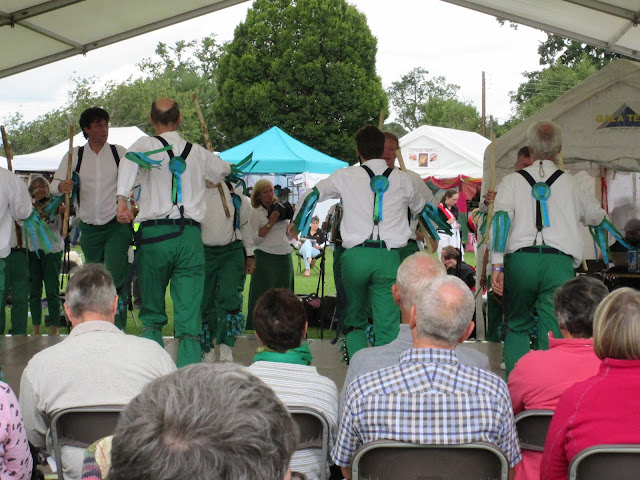 These are the Sheffield City Morris Men.  Sing lustily to the tune of "Blackadder"
Green trousers, green trousers, they make us debonair...
Yes gentlemen, I rather think they do.﻿ 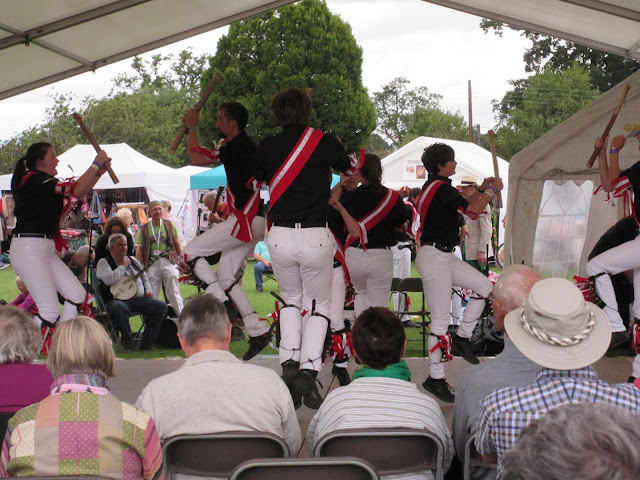 And just when you thought I was confirming all of your stereotypes about morris dancers, here are Fool's Gambit, a team of young men and women who dance very beautifully and athletically. 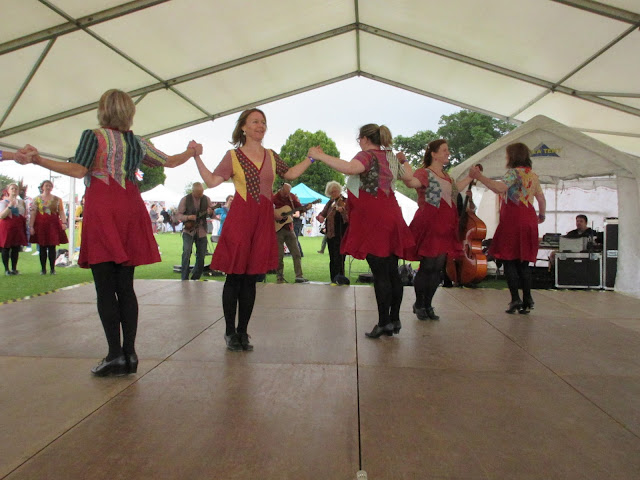 Now these are my favourites, an Appalachian step dancing group called Kickin' Alice and their band, Kickophony.  They are not from Appalachia, they are from Shropshire, Herefordshire and the West Midlands.  I think they are fab but I am unashamedly biased: you see, one of these dancers is The Teacher.  Here she is in close-up - 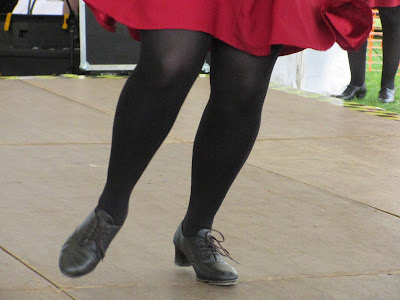 And then, of course, there was the music.  It was wonderful.  On Sunday morning I walked through the site thinking, "Well, it's been absolutely fantastic this year," and then I remembered that we weren't even halfway through yet!  We saw Steve Knightley, Kate Rusby, Oysterband, The Ukulele Orchestra of Great Britain, The Spooky Men's Chorale - all amazing.  We love the sea shanties and the Roaring Trowmen ticked that box bigtime, unlike last year when the Liverpool Shanty Kings were not only offensive but they didn't actually sing sea shanties!  What we noticed this year was the number of very young performers and how very good they were - The Teacups and Granny's Attic deserve a special mention here.  And sometimes I hear something which really moves me, it's rare but a couple of years ago it was Martyn Joseph and this year it was Jonathan Byrd and the Sentimentals.  We missed him last time he was here but I read his writings about it afterwards and I regretted that because he writes in a very literate way, so this time I made sure that we saw him, TWICE, and the second time I suggested that The Mathematician and The Beau come too.  She loved him so much that she bought his CD, I loved him so much that tears fell down my face (I wasn't alone in this, I shared my tissues with the women next to me).  Here he is (in the red shirt) with the Sentimentals and Steve Knightley, who is my absolute favourite.  It's the emotional literacy you see, I'm a sucker for it. 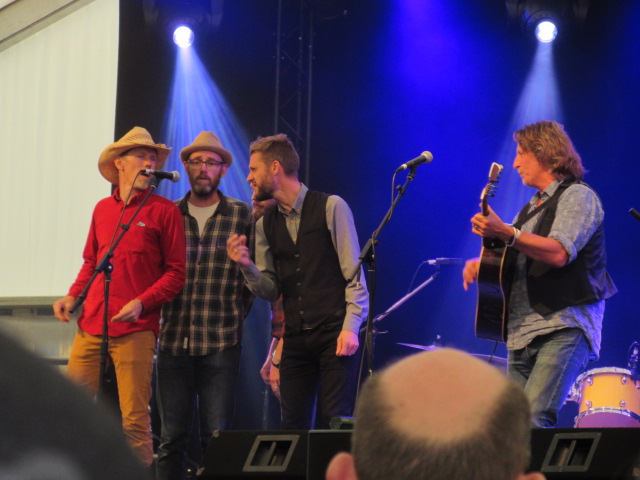 And so the festival is over for another year, the bubble has burst and I have come back down to earth with a bump.  The Mathematician once described it as "a four day activity holiday".  It is exhausting - we are up with the sun and don't go to bed until the wee, small hours and we pack a lot in - and this year we had all weathers to contend with: sunshine, high winds, cloud and rain.  I understand that it's not everyone's idea of a holiday, but it is mine. After all, where else would you see a contra bass bugle? 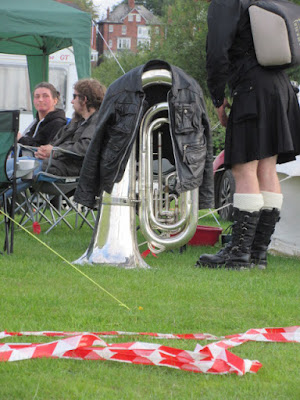 So that's it for another year.  Tickets for 2016 will be on sale in less than three months' time... 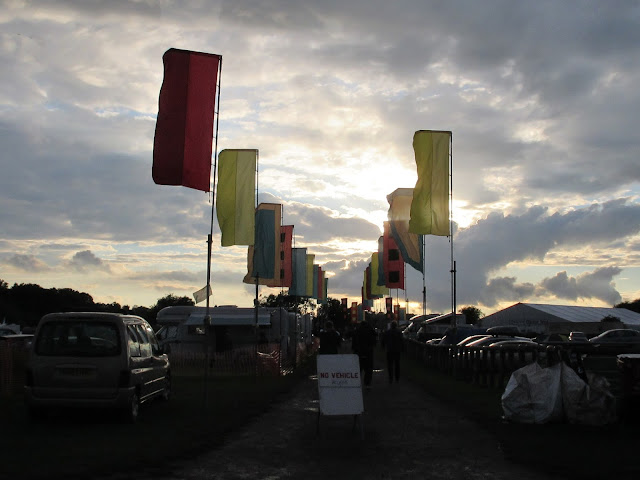