Autumn On The Edge

It was early November, the sun was shining, the sky was blue and the temperature was warm enough for us to be wearing long-sleeved t-shirts.  "Shall we go out somewhere?" he said.  "Yes please," I replied.  "Where shall we go?" he said.  "Somewhere arboreal,"  I replied.  I wanted to wonder at the trees in their autumn party dresses before they finally cast them off.
He took me to Wenlock Edge, a walk we love, and he didn't just take me, he took his camera, too.  "I'm going to take some photos for your blog,"  he said!!!!!!!!!!!!!!!!!!!!!  We were just over two miles from home when we realised that it was quite foggy.  "I hope it's sunny at the Edge,"  he said.  By the time we were four miles from home the fog was thick and the temperature had dropped - fortunately, we found our emergency fleeces in the car boot and boy, were we grateful.  We couldn't see the expanse of the Ape Dale stretching out below the Edge, but we could see the trees (well, only the ones which were close to us).  I know that Blogland has been full of pictures of autumnal trees for weeks now, but this is a place to record my memories and so I am going to show you his photos. 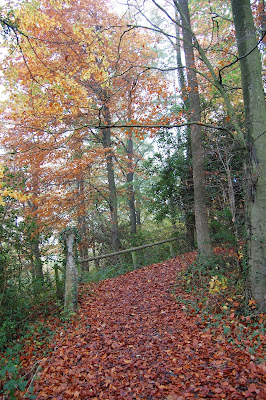 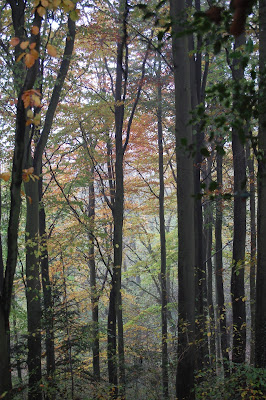 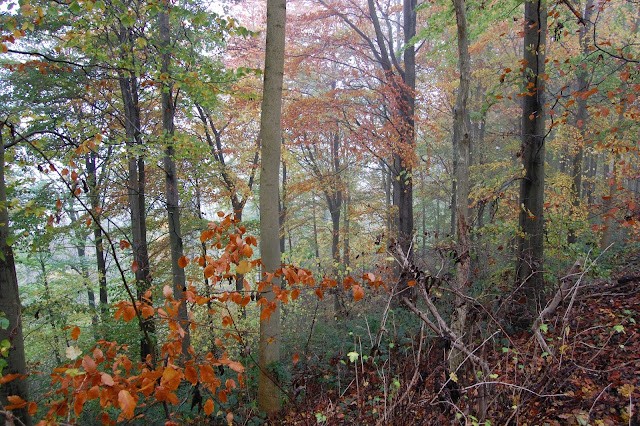 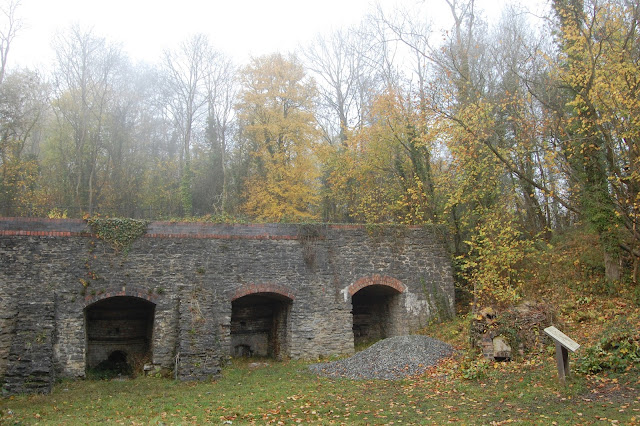 These are old lime kilns, a reminder of industrial activity which ceased long ago - he is particularly keen on this kind of industrial archaeology.  While he went down to photograph them, I found a fallen tree trunk and sat alone in the wood.  I looked around at the beautiful colours, I breathed deeply and drew in the scent of autumn woodland (actually, I suppose it's the smell of decaying vegetation, but that doesn't sound very attractive, does it?) and my head filled with the sound of birdsong, lots of it.  It was a very special few minutes.  I think I was trying to preserve it in my memory, something I could draw on later.
That was a fortnight ago.  There hasn't been much sunshine since that day and high winds a few days later have taken most of the leaves from the trees now.  Autumnal temperatures have been amazingly high here and we haven't put the heating on yet, which is a blessing because I'm not sure how we are going to afford to put it on at all, but I think that winter is on its way.
Things are a bit grim here at Tiggywinkle Towers so I would like to say a big THANK YOU to Karen, Karen, Rosie, Amy, Janet, Lisa and Alison for the kind, supportive comments you left on my last post.  You have helped me to see things from a different perspective - yes, life are tough at the moment but it would be a great deal more difficult if I didn't have caring, thoughtful people around me.  And in a week where the world seems to be a dreadful, brutal place, how wonderful it is that people who have never met me and know me only through what I write here care enough to leave a thoughtful message for me.
I shall be back soon.
Love, Mrs Tiggywinkle x
Posted by Mrs Tiggywinkle at November 16, 2015