Hello, thank you for calling in, and special thanks for your kind messages of sympathy and support.  I shall be back soon to catch up with you, but in the meantime, I have this special post for today.  This was always going to be today's post, whatever happened, and it will become clear why.. 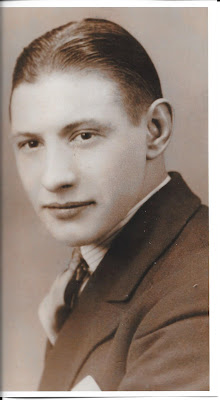 This is Arthur Holland Budd, known to many as Art, to a few as Dad and to me as Gramps.  He was born in Hackney in North London on 18th December 1909, the first child of Arthur and Florrie.  The family was not well off: Arthur made just enough money selling newspapers to enable them to live together in one rented room.  When Gramps was three years old, his father became ill and died, three months before his younger brother, George was born.  Poor Florrie, she was only twenty-six years old and now had two little boys to support.  So what did she do?  She married again, of course, providing her sons with a stepfather, a merchant seaman who was also called Arthur!  Gramps was almost eight years old.
Gramps left school when he was fourteen years old and was apprenticed to a cobbler, but that didn't work out - I think he couldn't stand the smell of the glue - and he eventually found a job as a warehouseman in Shoreditch with Hobday Brothers Ltd, a wholesaler of bicycle, motorcycle and motor car accessories and latterly, electrical applicances.  He stayed there for years, it's where he was working when he married his sweetheart, Julie, on Christmas Eve 1933 and he was still there when their first child, my father, was born in 1941. 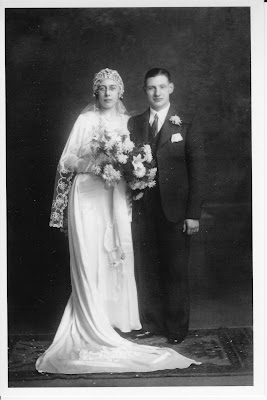 Of course, this was during the Second World War, and it wasn't long before Gramps had to leave the warehouse and join the Royal Air Force - he always said that Hobdays had to replace him with two men to get the same amount of work done.  So what did the RAF do with this experienced warehouseman?  They assigned him as a storekeeper, of course, and sent him off to the Cocos Islands in the Indian Ocean. 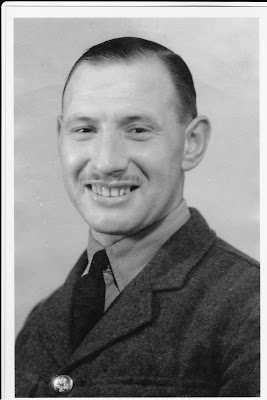 Gramps' brother, George, was also conscripted into the RAF and wrote to Art in March 1943, "war is a curse, still I think it will soon be over now, we can't go wrong now the Budd boys are on it".  I had never heard that until it was read out at Gramps' funeral and the poignancy of it made me smile then and still does.  As my father wrote in his eulogy, "Unfortunately, a storekeeper in the Cocos and a RAF driver in Iraq were unable to deliver quite that quickly and it was 1946 before Arthur returned home."  When I asked my father's permission to write this post, my mother asked me if I would like a copy of a photo of Gramps and George together in their uniforms, a photo I had never seen before and am proud to show you now, so here they are, the handsome Budd Boys - 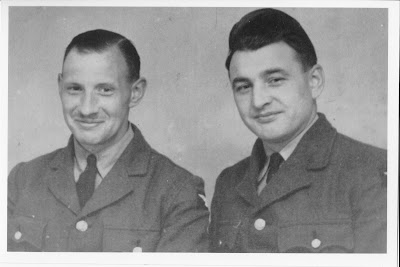 After Gramps was demobbed, he went back to Hobdays because firms were legally obliged to hold open pre-war jobs for returning servicemen.  A second son was born in 1947 and five or six years after that, Gramps became ill with a hernia - which he blamed on having to do all the work of the two men who had replaced him during the war - and spent six weeks in hospital, during which time, Hobdays sacked him!  However, I think this was really a blessing in disguise because he became a bus conductor with London Transport.  Now then, gentle reader, you may not know what a bus conductor is, so please allow me to explain: each bus had a driver and a conductor, the passengers got on the bus at the back and while the bus travelled on to the next stop, the conductor walked around the bus, took their fares and issued them with tickets.  My Gramps did that for almost thirty years as well as acting as the local Trade Union Representative, administering the sick fund and running the Dalston Garage football pool.  Gramps was A Bus Conductor:  when my sisters and I visited his house, his cap would be hanging on the peg in the hall and we loved to put it on and play at being bus conductors.  In 1977, when London Transport introduced a compulsory retirement age of 68 years, Gramps was the only member of staff who had to retire but even that didn't stop him completely as he still went to the garage every Friday to run the football pool and, as my father put it, "offer advice to his successors".
Twelve years later, Gramps moved out of the house in Hackney he had lived in for 37 years and, with Nanny, moved to Cardiff to be closer to his elder son.  Obviously, he memorised the bus timetable and made full use of it!
In his youth, Gramps had been a keen sportsman, excelling at cricket and football, he remained a keen Leyton Orient supporter and he loved to watch sport on the television.  He was interested in current affairs and in history and when I was a little girl he took me to visit the V&A Museum of Childhood in Bethnal Green and, with Nanny, the Tower of London.  Those are precious memories.  He loved the seaside and I think he thought that a holiday was not a proper holiday unless it was spent by the sea - I have precious memories of those, too.  He especially loved small children and in his eighties, would get down on the carpet to play with my daughters, much to their delight.  He had two sons, two daughters-in-law, six grandchildren and nine great-grandchildren and I think he was hugely proud of all of us; when he lived in London he used to take us on the Underground sometimes and as he waved his free pass to the person at the barrier, he would say, "My grandchildren," very proudly, and we would all be ushered through without tickets, on a nod and a wink.
Gramps died at the age of 99.  Can you imagine the changes he saw in his lifetime?  Five British monarchs, two world wars, women's suffrage, men at the South Pole and on the moon, television, computers...It has been said that it is a seminal moment when your last grandparent dies and I have to agree.  I felt bereft, and as the eldest child of the eldest child, I also felt the generations shift.  The London bus has become a kind of totem for our family, a symbol of our identity, a reminder of Gramps, our London heritage, our roots and our memories.
He often used to say to me, when nobody else was listening, "You're my number one," with a knowing smile.  I knew exactly what he meant: it wasn't that I was his favourite because he loved us all equally, it was simply that I was the first-born grandchild, number one of six.  It was a play on words, his little joke.  I used to reply, "And you're my number one."  He knew exactly what I meant.

I have to thank my dear Dad for giving me permission to write this post, for allowing me to use parts of his eulogy and for sharing his photos with me.