Hello, thank you for dropping in.  If you've been waiting a while, thank you for your patience; we have three family health crises and for the last few weeks my head has been too full of worry to write anything remotely sensible here.  However, the weekend before last the Best Beloved and I took ourselves away to the coast and the sea and the sunshine helped to calm my whirring brain and restore some perspective.  I'd like to share some of our little break with you.
The Teacher and Flashman were married almost two years ago on his birthday, two days before her birthday, and last year, they filled these three days with celebrations and christened the period "the birthiversary".  They enjoyed it so much (well, who wouldn't?) that they intend to do it every year and when I commented that I thought it was a wonderful idea The Teacher replied, "You have a birthiversary too.  Why haven't you been away?"  My instant reply was, "Because we had children!"  You see, we were married on the Best Beloved's birthday, a rather cunning ploy of mine to ensure that he would always remember the date of our wedding anniversary; by our first anniversary I was almost nine months' pregnant and since then our celebrations have been filled with family love.   However, now that our children are proper grown-ups we thought we could sneak off somewhere by ourselves for a couple of days.  Where to?  Anglesey was the obvious choice as it's less than three hours' drive away and the landscape is completely different.  I love it there.  Where would we stay?  There was a great deal of discussion about this: I wanted to camp but the Best Beloved was concerned that it might rain and while the thought of that didn't bother me, it obviously bothered him very much.  In the end, I had a brainwave and found  Llanfair Hall.  Glamping, we decided, could meet both our needs.

I can't remember the last time we went anywhere for a whole weekend during term time and by the end of the week I was fizzing with excitement.  I finish work early on Fridays so I was home by 1 o'clock with plenty of time to bake a birthday cake, straighten up and vacuum the living room and pack my bag, all done with a spring in my step.  The Best Beloved arrived home at 4.30pm and an hour later we were on the road under a doom-laden sky, but to the west, we could see blue and that's where we were heading, with songs on the radio and in our hearts.

The site did not disappoint.  I knew that it was my kind of place when I saw this - 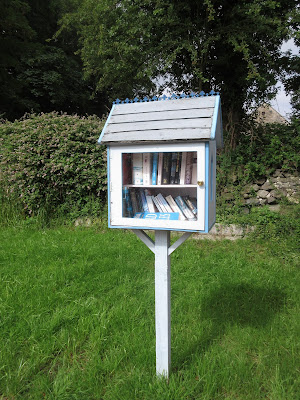 It's a lovely idea: borrow a book while you are there or take one away and leave another in its place.  Sadly, I hadn't brought a book to leave there because I really did want the copy of Elizabeth Gaskell's Cranford which was inside.  Next time we go, and I feel sure that there will be a next time, I shall be better prepared.

This was our hideaway - 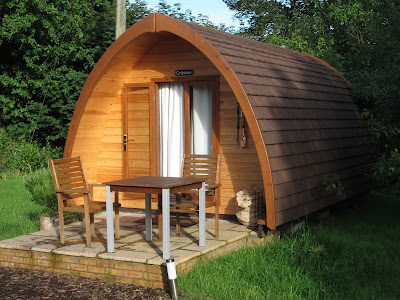 Inside this little pod there was a double bed, a sofa, a table with two dining chairs, a television and dvd player, a fridge, a microwave oven, a kettle, a kitchen sink and, best of all... a wet room!  No striding through the campsite to the toilet block in my pyjamas with a torch late at night for me!  Glamorous camping indeed in a thoughtfully and stylishly appointed retreat.  We cracked open the prosecco and the celebrations began right there on that little terrace.

Saturday was the special day and it began perfectly with 'phone calls from our girls.  There were cards and gifts for the Best Beloved and he cooked his favourite breakfast in the field kitchen, a full English, which we had to eat indoors on account of the drizzle which had set in.  It didn't dampen our spirits., though, and we set out northwards, for Porth Llechog, where we discovered the sunshine. 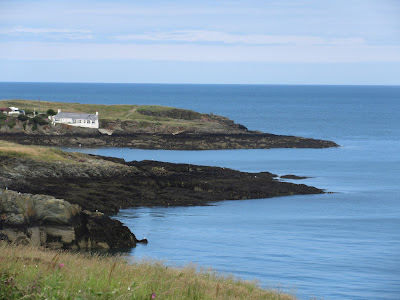 Porth Llechog is Welsh for "sheltered bay" and ships sailing between Ireland and Liverpool used to pull in here to shelter from rough waters in the Irish Sea.  There were no rough waters while we were there, the sea was flat and calm and utterly mesmerising as the cloud cleared from the west to reveal the blue sky and the water mirrored what was happening above.  We sat and watched it for a long time as the light changed.

Celebrations resumed in the evening, back on that little terrace where it had stopped drizzling.  The Best Beloved's family called him; I wore my party dress; we made a fire in the firepit and barbecued for dinner; we received lots of congratulatory texts and facebook messages and played around taking anniversary selfies on our 'phones (they were rubbish) - all this social media stuff is quite new to us and we are still a bit excited by it.  (Apparently, one of The Mathematician's friends commented that we were very cute, "like a couple of Year Nines"!)  I sang the appropriate song to the Best Beloved and we ate the appropriate cake. 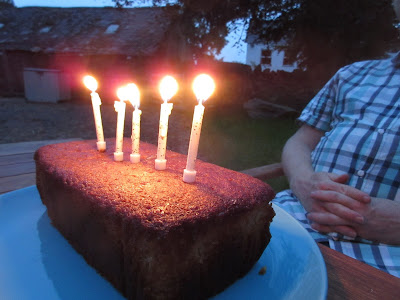 (I know that it doesn't look very exciting, but that cake is Nigella's lemon syrup loaf cake and it's scrumptious, damp and heavy with fragrant syrup which I had spiked with limoncello.)

It was a perfect evening, sitting outside as the sun set behind the  medieval church of Llanfair-yn-y-Cwmwd on the other side of the wall, reflecting on how blessed we felt to be able to come away to this special place and to have caring, thoughtful people in our lives.  Anglesey, as always, had soothed our troubled minds. 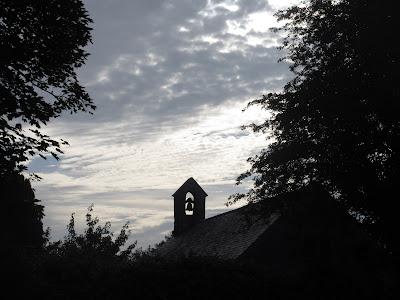 That birthday cake was just as scrummy at breakfast time the next morning, eaten with raspberries.  In fact, I can't really think of any occasion which would not be enhanced by that cake, although I should add that the Best Beloved thinks this is very peculiar breakfast food and he would much rather have bacon and eggs! 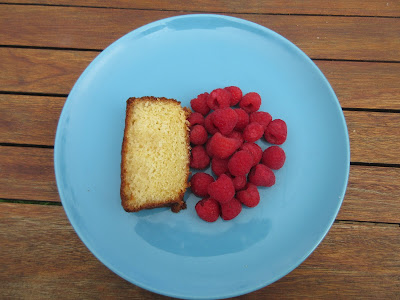 We did visit somewhere else while we were on Anglesey, but that deserves its own post so I shall be back later this week to share it with you.  In the meantime, take care of yourselves and cherish those who you love.