Hello, thank you for dropping in.  Today is Remembrance Sunday and it carries special poignancy in this year, the centenary of the Battle of the Somme, the largest battle of the Great War on the Western Front.  On the first day of the conflict we often simply call "The Somme" 19,240 British soldiers died.  19,240.  The battle did not finish that day, however, as fighting continued for a further 140 days, by which time the British army had advanced just seven miles and more than one million men were dead or wounded.
The last battle of the Somme Offensive was the Battle of the Ancre which began one hundred years ago today and ended on 18th November 1916.  Today I am going to tell you the story of a young man who was injured at that battle, one hundred years ago today, and died a grim and painful death.  A volunteer who lied about his age in order to join up, so keen was he to do his bit and serve his country, he left behind no wife or children to tell his story and he lay unspoken of for almost a century, his sad tale untold.  I am not going to tell you his story: my cousin Anne is, for she is his great niece.  These are her words and I am thrilled to bits that she has written this post for us.
WOR JOE
Wor Joe, wor kid, the bairn, Able Seaman Joseph Garside. He would have been all of these names to those who knew him. He was born in Newcastle upon Tyne on 16th September 1897 to Joseph and Annie Garside my great grandparents. He was 5' 4" tall, had dark brown hair and eyes, his occupation was a pitman. I only know all this because of my research into our family history. My Mam gave me all the information I needed to get started. She told me all about her grandparents, aunts, uncles, cousins, who married who etc. But nothing about Joseph. Now why on earth should Joseph be missing? Perhaps it was because he died before she was born or perhaps Joseph's life was too short and too painful to talk about. But now, on this the 100th year anniversary of the Somme, Joseph Garside, along with all our brave young men, needs to be remembered and talked about.
Joseph joined the Royal Naval Division on 27 May 1915 giving his date of birth as 1896. In December 1915 he was drafted to Hawke Battalion and his records show the Division was moved to Egypt in January 1916 preparatory to the Gallipoli Campaign. At the end of the Gallipoli Campaign the Division were re-designated 63rd (Royal Naval) Division and were moved to France, departing Mudros 18th May, arriving Marseilles 23rd May 1916. Joseph's Hawke Battalion were involved in the Battle of Ancre, a phase of the Battles of the Somme. It was here he was wounded on 13th November 1916. His records show he was admitted to the Gen Hos Dannes Camiers on 17th November and later transferred by Amb. Train/ HMS Cumbria on 23rd November and arriving at Warncliffe War Hospital, Middlewood Road, Sheffield on 25th November. On 24 August 1917 Joseph was discharged (invalided) from the RN and spent the rest of his days being cared for by the Mary Magdalane Home for Incurables Newcastle upon Tyne, close to his family. He died on 11th June 1918 aged 20 of (1) Gun Shot Wound Spine (2) Paralysis Cystitis. It is hard to imagine how dreadful his last 19 months would have been. Joseph was buried in his local churchyard with full military honours.
However this is not the end of Joseph's story. I was contacted last year by the Commonwealth War Graves Commission and informed that Joseph was one of several hundred servicemen who were not on any official war memorial. Many, like Joseph, had died after they had been discharged. A new 1914-1918 Memorial to include all these servicemen was to be unveiled at Brookwood and,  as Joseph's name was on this new memorial, I was asked if I would like to attend the inauguration and dedication ceremony? It was an unforgettable, very moving day and my husband Alan and I were introduced to the Duke of Kent who is President of the CWGC and I was able to tell the Duke all about Joseph Garside!
Now you have been remembered and talked about. God bless you wor Joe, you were just a bairn. 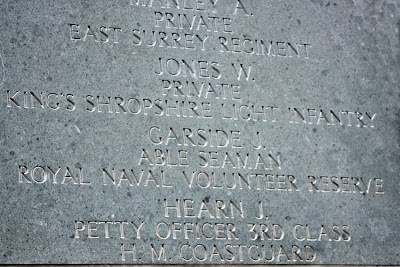 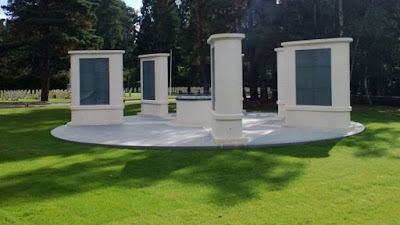 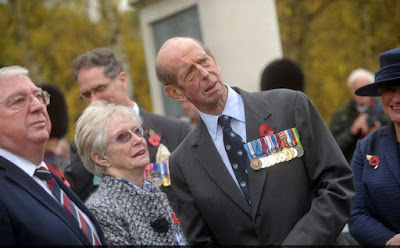 P.S. A little update to this story.  Joseph's great nephew Robert Garside has discovered his burial site in St James Churchyard, Benwell, Newcastle upon Tyne and informed the CWGC who have sent the following email:
I can confirm that the Commission is in the process of producing a headstone to mark the grave of Able Seaman Joseph Garside in Benwell (St. James) Churchyard as his official place of commemoration. We cannot say when this work will be completed at this stage, but the Commission update you once we have any further information.
So perhaps another ceremony may be in the offing with his family attending.
See you soon (she said, wiping a tear from her eye as she pinned on her poppy),
Love, Mrs Tiggywinkle x
Posted by Mrs Tiggywinkle at November 13, 2016