Hello, thank you for calling in here, it's lovely to see you.  I'm afraid the weather has been fairly dismal for the last fortnight, although it hasn't actually rained today, and apparently, summer has gone.  We haven't even been on holiday yet!  Sigh.  Thank you very much for your comments on my last post, you lot are lovely and shawl number two is nearly finished. 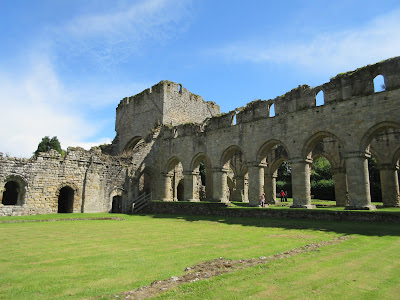 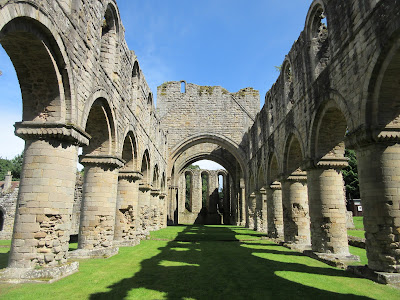 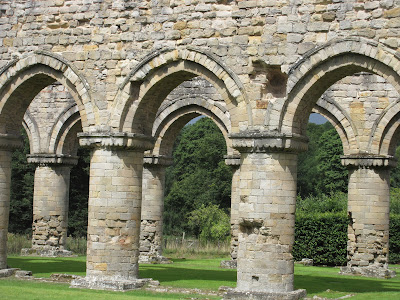 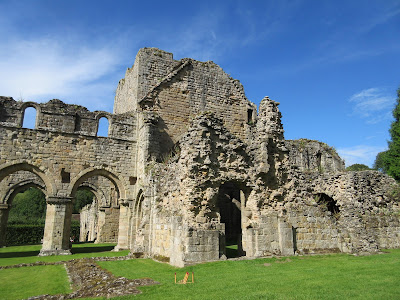 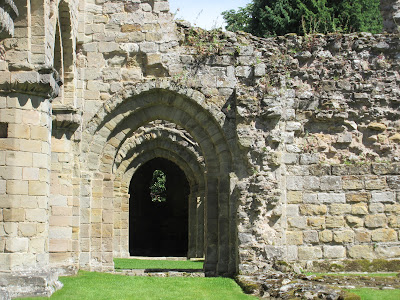 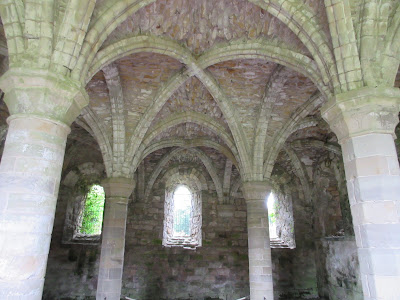 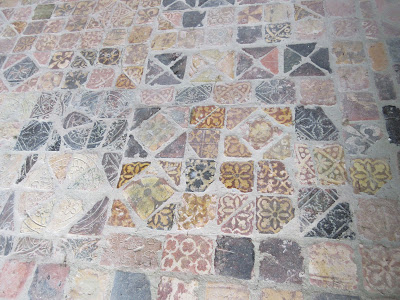 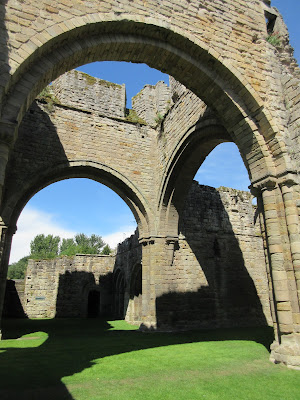 I have some lovely real friends (as well as lovely blogging friends) and last Saturday, I went out with one of them to spend the afternoon at one of my favourite places, Buildwas Abbey, built in the twelfth century and abandoned to decay since Henry VIII dissolved the monasteries in the sixteenth.  We certainly didn't intend to stay there all afternoon but it's that sort of place, so peaceful and secluded, protected from the rest of the world by tall, leafy trees and shrubs and never busy, so that you feel yourself slowing down and relaxing, worries and tensions melting away until all you are left with is yourself.
We encountered all sorts of weather while we were there and at one point, peering through the glassless windows, I wondered whether the sliver of sky I could see was deep blue or charcoal grey; it turned out to be the latter.  We heard the thunder rumbling around, getting closer, and eventually fat, heavy drops of rain began to fall.  We were not deterred - after all, we are British and used to this sort of summer(!) so we simply put up an umbrella and carried on chatting until the storm passed.  Our endurance was later rewarded with glorious blue sky punctuated with thin white streaks of cloud although later still, the cloud thickened and expanded to cover the blue and the temperature dropped.
There are wooden benches in the grounds, even some picnic benches, so we had taken a picnic.  My friend had expected me to take a flask of tea but I didn't...I took cans of gin and tonic instead!  There we were, without any responsibilities for a few hours, spending them drinking gin in the twelfth century!  And so we spent almost five hours together eating, drinking, chatting and looking at the ruins, separately and together, marvelling at the fan vaulting and the centuries-old encaustic tiles in the Chapter House and the huge pillars in the roofless nave, watching the swallows diving in and out of the Monk's Parlour to feed their chicks who were safely tucked up in a nest in the vaulting.  Butterflies fluttered by and a large dragonfly showed off.
I have been to Buildwas Abbey many times before - for several years it was the site of an annual family picnic to celebrate The Teacher's birthday - but never lingered for so long.  It's that kind of place.  Do go if you can - it's in the care of English Heritage and the current charge is £4.30 for adults.  The website is here.  I think I'll be going back soon to chill out and see how those baby swallows are getting on.
See you soon.
Love, Mrs Tiggywinkle x﻿
Posted by Mrs Tiggywinkle at August 10, 2017