Hello, thank you for calling in, it's lovely to see you here.  Thank you especially for your empathetic comments on my last post; I keep walking into The Mathematician's (almost) empty bedroom, feeling the silence and having a little think about her.  I'll be OK - and yes, thank goodness for modern technology which enabled her to give us a laptop tour around her new flat over the weekend.


I'm sorry I've neglected you - we spent the bank holiday weekend at the Shrewsbury Folk Festival, came home on Tuesday afternoon, unpacked the car and were pooped!  I was ill in bed for the next day or two but recovered in time to travel south at the weekend to celebrate a nephew's eighteenth birthday.  I've had a lovely time (apart from the ill in bed bit, obviously).

During the week leading up to the Folk Festival I ticked a few more things off my Summer List.  One of them was this: 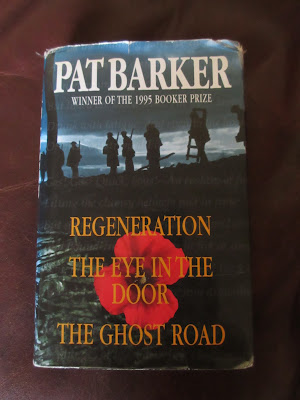 There are three novels contained in this volume, written in rather small print!  In fact I began the first, Regeneration, a week before the school holidays started but I finished it and read the other two during the holiday weeks.  They are set during the months July 1917 to November 1918 and are about the psychological effects of the First World War on young army officers.  The third book, The Ghost Road, won the Booker Prize in 1995 and here's an extract which moved me to tears.

On the edge of the canal the Manchesters lie, eyes still open, limbs not yet decently
arranged, for the stretcher-bearers have departed with the last of the wounded, and
the dead are left alone.  The battle has withdrawn from them; the bridge they
succeeded in building was destroyed by a single shell...
The sun has risen.  The first shaft strikes the water and creeps towards them along
the bank, discovering here the back of a hand, there the side of a neck, lending a
rosy glow to skin from which the blood has fled, and then, finding nothing here that
can respond to it, the shaft of light passes over them and begins to probe the
distant fields.

This tome has sat on my To Be Read bookshelf for several years, waiting for me to be ready to tackle it because its contents are quite meaty (the pencil marks inside show that it cost 50p in a charity shop).  In the last months leading up to the centenary of the Armistice, it was a good choice.

8.  A Wilfred Owen Road Trip
The poet Wilfred Owen  appears as a minor character in Regeneration and The Ghost Road and I think I have told you before that for many years, his poem Dulce Et Decorum Est was my favourite (it is also, of course, the poem which I have read aloud when I have visited the Poppies sculptures).  In June I attended an illustrated talk about Owen's life and although I knew that he was born in Oswestry in Shropshire, I hadn't realised until then that he lived in Shrewsbury with his family when he was young.  The speaker told us that on summer Sunday evenings they would walk through Monkmoor Meadows to the River Severn where they would use the hand ferry to cross the river to Uffington Church in time to attend Evensong.  I had a mind to go and find the house and then visit the church and although the hand ferry is long gone, I hoped to find its traces.  I should say that I really wasn't bothered about walking through the meadows, firstly because they pass under the busy A49 with its noisy traffic, and secondly because they are next to a sewage works with its attendant smells!  So, on a lovely sunny day we set off to find 69 Monkmoor Road.  The house was newly built when the Owen family moved in in 1910 and Wilfred's father, Tom, named it Mahim after the Mahim Railway Station in Mumbai (then Bombay) where he had worked for four years before he was married.  Wilfred's bedroom was the attic room. 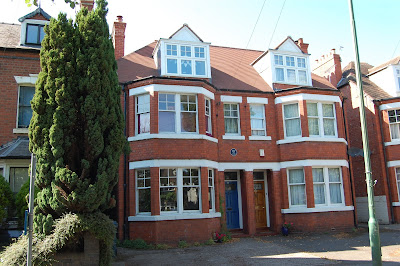 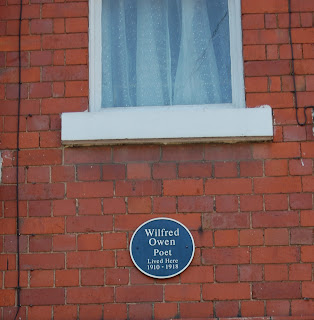 Hmm. 1910-1918.  Those dates were a disappointment to me because they meant that Wilfred was seventeen years old when they moved here, not the child I had imagined.  In the autumn of 1911 he went to Dunsden in Oxfordshire to work as a lay assistant to the vicar, returning home to Shrewsbury in 1913 before moving to France later that year to work as a language tutor.  He remained in France for the next two years before joining the British Army in 1915 and he was killed in action in 1918 so really, he didn't "live" at Mahim for very long at all.

We got back in the car and drove the short distance to Uffington where, to my enormous disappointment, the church was locked, and you know how much I like to visit a church. However, we walked down the path behind the church and found ourselves in a rather lovely churchyard where we discovered that we were right on the riverbank. The Best Beloved went to investigate and found the steps which we reckon led down the banks to the ferry.  I sat on a bench in the sunshine and imagined Wilfred arriving with his parents and three siblings.  It was a lovely, peaceful spot.  Then I remembered that the church bells were ringing to announce the Armistice on 11th November 1918 when Tom and Susan Owen received the telegram which gave them the news that Wilfred had been killed one week earlier. 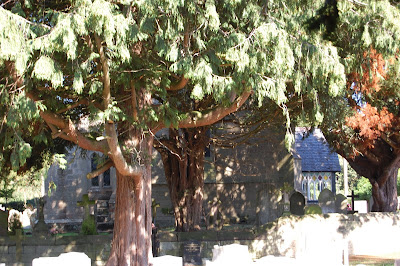 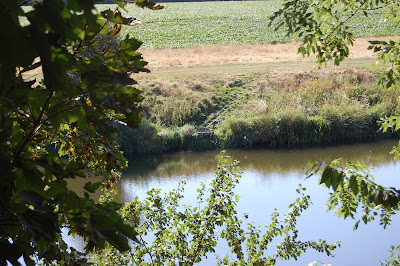 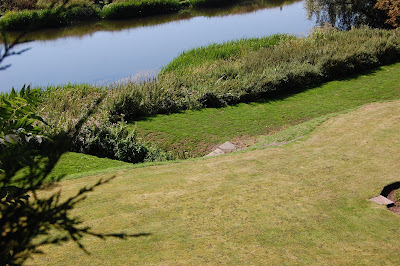 A few miles away from Shrewsbury lie the remains of a city which the Romans called Viroconium or Uriconium and which we call Wroxeter.  It was the fourth largest Roman city in Britain, having a population of about 15,000 at its peak, and what remains is substantial - the wall traditionally known as the "Old Work" is the largest free-standing Roman ruin in Britain.  Wilfred used to cycle there, sometimes with his brother or with a friend, sometimes by himself, to have a look at the archaeological excavations which were going on there, or to dig about for ancient remains himself.  In the summer of 1913, after he had come home from Dunsden and before he went to work in France, he wrote Uriconium, An Ode which is regarded by some as his first war poem.  The Best Beloved and I drove there from Uffington and although we have visited many times before, this was the first time I had visited with Wilfred alongside me. 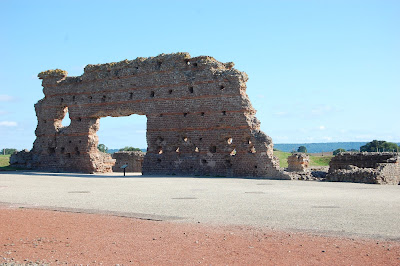 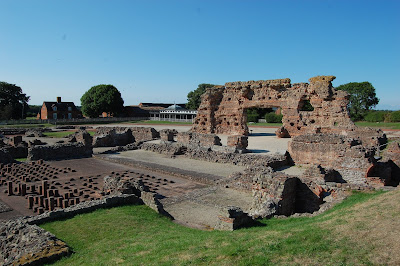 Since our road trip I have discovered that there is a walking trail around Shrewsbury which includes other houses which the Owen family lived in before they moved to Mahim.  I really enjoyed walking with Wilfred, although I felt the poignancy of what I knew was coming, so I feel another trip coming on.

I did manage to tick another item off my summer list during that week, but I'll tell you about that next time.  I'd like Wilfred to be the star of this post.

Posted by Mrs Tiggywinkle at September 04, 2018