Hello, thank you for dropping in.  Now that we have reached the vernal equinox and astronomical spring has sprung, I've changed my header photo to show you Acton Burnell Castle behind the village churchyard, which is noted for its heritage collection of daffodils - much as I love Ironbridge, I don't want to be looking at a picture of it bedecked with snow when outside my window, the daffodils are flowering. I did think about going back to my previous header photo, the one I have used since I began blogging over four years ago, but I fancied something seasonal and I hope you approve.


Today I would like to tell you a story so are you sitting comfortably?  Then I'll begin...once upon a time there were two little girls called April and May.  They were cousins, born a few weeks apart at the end of the 1960s.  One year, when they were quite small, their aunt bought them each a shiny, red, wooden stool.  Aunts do that, don't they?  They see a good idea for a niece or nephew and if there is another niece or nephew of the same age, they buy one for each of them.  A small stool is an excellent gift for a small child because it is so very useful: you can stand on it to reach the things which are too high up, you can sit on it when your little legs need a rest and you can use it as a little table, perhaps for your tea set when you are having a tea party.  If the stool has been painted a bright and shiny colour, so much the better. 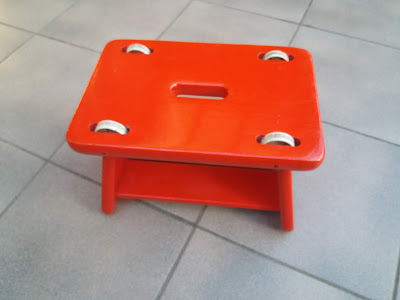 These stools, however, were even better gifts because they had an extra function.  Four little wheels were set into the seat, and can you see the bracing piece between the legs?  This meant that you could do this - 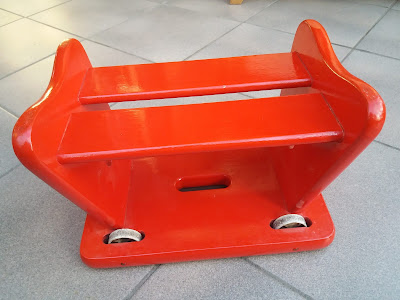 Turn the stool upside down and a small child could now sit astride it and use her feet to scoot around.  What a marvellous design!  April and May now each had their own set of wheels.  Many, many hours of pleasure were had with the red stools (and April's, at least, was always known as "the red stool") in the 1970s, both indoors and outdoors. April had three siblings and May had two and all seven of the children enjoyed playing with the stools; April's big sister may have been a teeny bit jealous that she didn't have a red stool of her own.

Alas,  after years of sterling service, April's red stool eventually succumbed to the pressures of wear (and four children) and the seat split, the piece of wood which held two of the wheels shearing right off.  The red stool was irreparable and she and her sisters were very sad.  May and her siblings grew up and her red stool was cast aside, by now looking very scruffy and worn.  However, May's mother tucked it away inside her house and kept it.

More than twenty years later, May gave birth to a little boy.  Her mother brought out the old red stool, sanded it down and repainted it with glorious, shiny, red paint so that it looked as good as new, ready for her new grandson to scoot about on it as his mother and her siblings had done.

Years after this, when May's children had also outgrown the red stool, May tucked it away inside her house (well, not quite, because she found it very useful when she needed to reach things on the high kitchen shelves)...until the end of last year, when I visited her with my family and she brought it out for Tom Kitten to play with.  When we left, the red stool came home with us on long-term loan.  I photographed it and sent pictures to my family to show them which caused a good deal of excitement as many happy memories were recalled.  At Christmas, when we gathered together, I took the stool for them to play with to show them.  April was thrilled to see it, for she is my little sister and May is my cousin - and by chance, it is her birthday today.  Happy Birthday, May.

So this little red stool is now serving its third generation of small children and more memories are being made.