Hello, and thank you for dropping in.  Thank you too for the kind comments left on my last post.  You lot are lovely.  The weather here has been typically autumnal with wind, rain and sunshine, in fact we have had all of that today, but it's not cold and although we are lighting the fire in the evenings at weekends, we haven't turned the central heating on yet. I am thanking God for small mercies because there hasn't been much income this month.

So, it's half term week and I am feeling a bit wistful.  For years now we have gone away during half term, usually to visit family.  That's the thing when you live a long way from the rest of your family, you spend your holidays visiting them.  The Best Beloved's parents lived on the south coast of England and mine live in South Wales so these visits often included trips to the seaside.  In more recent years the Best Beloved and I snuck away for a few days to North Wales on our own but for the last few years half term has seen us take the ferry from Poole to Guernsey with The Teacher and her growing family to visit The Mathematician.  This year, of course, there are no trips and for the first time in years, we are at home, almost as far inland as it's possible to be in this country and I am missing the sea as well as the people I love.  I am trying to keep busy and distract myself, looking for the tulips as I can't have the roses, but I am a little melancholy, reminiscing over our past trips.  I thought I'd share some photos with you. 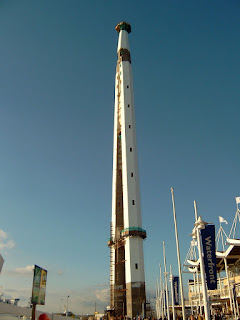 This is the Spinnaker Tower in Portsmouth under an intensely blue sky, still under construction in October 2003 and at this stage known locally as the Pompey Peg because of its resemblance to an old-fashioned dolly peg. 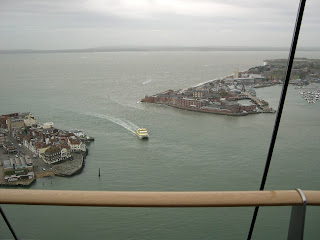 In October 2006, some of us (not me, I have no head for heights) ascended the completed tower to take in the views. 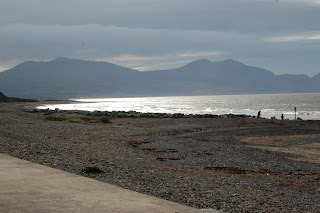 This is the beach at Dinas Dinlle in Gwynedd, near Caernarfon, in October 2009.  This is one of my favourite beaches and when the tide is out there is always treasure to be found for beachcombers here - shells, mermaids' purses, pretty stones - as well as the most amazing view of the Llyn Peninsular.  When the tide is in, the view is still there but the beach is not. 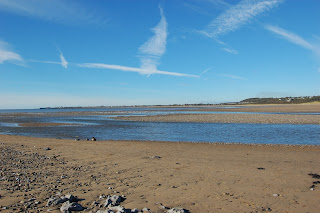 Here is the beach at Ogmore-by-Sea on the Glamorgan Heritage Coast in October 2010.  The weather was glorious and we took The Mathematician and two of her cousins.  It was even warm enough for a paddle (but only just!) and I found an ammonite.  I have very happy memories of that day. 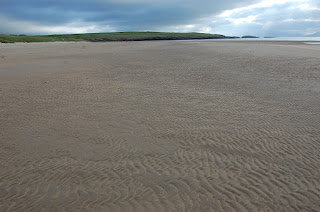 Here are the almost endless sands at Aberffraw on the west side of Anglesey in October 2013.  This is another wonderful beach.  You park your car in the village and then walk along the estuary until the big expanse of sand appears in front of you.  Storms and strong currents wash things up here - I have seen large shells, fish boxes from Ireland, a dead seal, a dead porpoise and, once, half a dozen heart sea urchin tests.  The shells and the sea urchins were the only things I brought home! 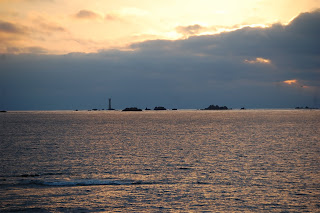 This was our first trip to Guernsey in October 2016.  The Best Beloved and I went out by ourselves to L'Eree Bay to watch the sun set over the sea behind Hanois Lighthouse. 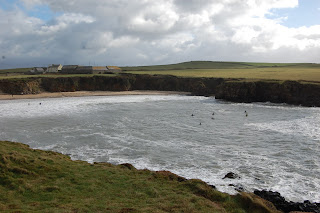 This is Porth Trecastell on Anglesey in October 2017 the day after a storm.  The waves were strong and hardy surfers were making the most of it, wearing wetsuits and helmets.  There were two dead leatherback turtles washed up on the beach that day.  It's another of my favourite beaches, not because of dead turtles but because of the golden sand, the dunes, the rock pools, the cliffs, the ancient burial site on the headland and the lovely family memories I have made here. 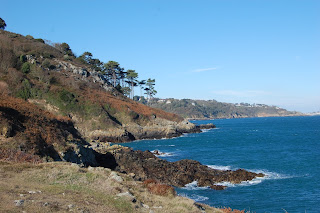 In October 2018 we were back in Guernsey and the sun was shining.  The sky was so clear that we could see all the way to France that day from Jerbourg Point. 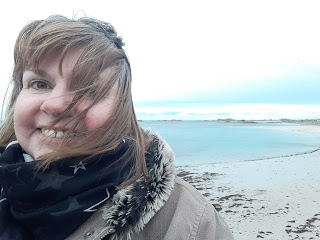 This is me on the beach at Cobo Bay in October 2019.  The weather was dreadful that week - our journey was delayed by storms for twenty-four hours and it rained almost all week, but we went out whenever it stopped, wrapped up against the wind.  We LOVE to be on a beach.
I'm off now to look for those tulips.