God Save The King

Hello.  If you've been waiting patiently, thank you for sticking with me.  If you have just found me, you are welcome here, too.

The last time I was here I told you how my mother told her parents about the death of King George VI and now here we are, seven months later, having just laid his daughter to rest.  I was hovering around the television on 8th September, watching the news unfold, and when Queen Elizabeth  II's death was finally announced I immediately rang my mother.  "I know that you will already know," I said, "but I wanted to tell you that the Queen has died because you told your parents that the King had died."  It simply felt the right thing to do.  As I was speaking to her the television played the National Anthem and, hearing it, my mother told me to stand up.  "My father would have done and your Auntie Peggie would have done, and your father-in-law as well," she said.  So the Best Beloved and I stood up, just the two of us, unobserved, in our living room, while the National Anthem played, and I didn't feel silly.

I heard a journalist say on television that he's not a monarchist but he is a Queenist and I have discovered over these last twelve days that I am a Queenist too.  I have been far more upset than I expected to be and I don't really understand why.  I never met The Queen and only saw her once, when I was a child and stood on a pavement waving a flag as her open carriage drove past.  Even my republican husband's views have changed during these days and he can newly see advantages in having a constitutional monarchy.  Yesterday we put the television on early, lit a candle and watched Her Late Majesty's last journey all day, standing up every time the National Anthem was played.  By the evening I felt wiped out.  All rather odd. 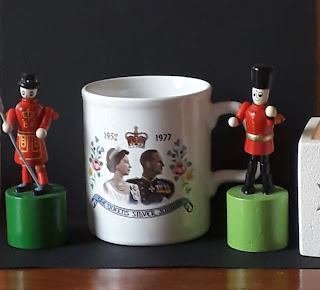 Today is a new day.

Posted by Mrs Tiggywinkle at September 20, 2022