From Farmboy To Fusilier, 1880s

Hello, thank you for dropping in.  After a week of summer it's raining again - at least we don't need to water the garden.  Every cloud has a silver lining and all that.


Thank you for the kind comments you left on my posts last weekend - I read and treasure every one (especially the ones which agreed that I was cute!). Today it is time for my monthly family history post - if you are new here, I post an ancestral tale once a month.  I am so enthusiastic about my family history that I could post about it every day, but you might not be as keen as I am so I restrain myself, with difficulty!  My lineage is not grand or famous but to me, it is fascinating because our lives are so different from theirs and, I suppose, I wouldn't be here if it were not for them.  To be honest, I had a cracking tale of 19th century fraud lined up for this month but after last month's sad story, which you can read here, and May's sad story, which you can read here, one of my friends asked if we could have a happier tale this month.  That's not as easy as it sounds when your ancestors were poor, but I have done my best...

John McKeon, let’s call him Jack, was born in Ireland in the early 1860s.  We don’t know exactly when because civil registration did not begin in Ireland until 1864 and there is no record of his birth so we can only assume that he was born before then, and the church records are incomplete, but it’s probably safe to assume that he was born in about 1863.  His parents were John and Catherine, he was probably the eldest of their eight sons – Patrick, Edward, Paul, Andrew, Hugh, James and Martin were his brothers - and they lived on a small farm of 27 acres at Cloonfad More near the town of Hillstreet in County Roscommon.

I know very little about Jack’s early life other than that his mother died before he was thirteen years old, but in January 1882 he joined the British Army, enlisting in the Royal Dublin Fusiliers.  He claimed to be exactly nineteen years old (but we don’t know if that was true) and the enlistment sheet shows that he had a fresh complexion, hazel eyes and dark brown hair.  The sheet also records that his physique was equivalent to that of a man of nineteen years and if you consider that he was 5’6” tall and weighed 131lb (that’s 9 stone 5 pounds if you are British) it tells you something about the size of the average young Irishman in 1882.  While he was in the army Jack grew taller and put on some weight, which was probably a testament to the diet.
Jack was promoted to Corporal thirteen months after enlistment and again to Sergeant six months after that.  In January 1884, the regiment sailed to Gibraltar and one year later, on 28th January 1885, the young sergeant wrote this letter home to his brother Pat –
North Front Gibraltar
28th January 1885
Dear Pat,
Your letter of 9th came to hand all right and in due time.  It is not necessary for me to go into details to explain the satisfaction which it brought me.  I have nothing strange to say this time living as usual and likely to continue so.  I had a letter from Jamesy yesterday written in the same half-foolish sort of a way which of course he thought was par Excellence.  He says all the Co. Leitrim party will soon die, that he does have great sport over in Kilbride at dances, that he brings Pat Kilbery the Fluteplayer , Peter’s Bay with him.  They are a nice pair of boys when they are together especially when they are beating across the bogs to see the Kilbride girls.  What sport.
I have some reason to believe that as you say, Bedelia will never carry out her designs of emigrating.  I think she is only “fitting it on” in order to try and knock numerous perquisites from you and I.  This is my final opinion on the whole affair what do you think.  There is nothing further or contrary regarding our shift from Gibraltar to a home station although it is still very much talked of among the whole of the parties whom it concerns.  But I have a strong opinion that we will go home very shortly.  And I hope we do.
Jamesy says the old chap looks very and works away finely.  He is getting young begorra I  wonder does he drink so heavy as ever.  I suppose not.  I think if Bedelia would act in conformity to the rules of obedience things would go on to perfection.  I have failed to find out how Hughy is doing at school, I do not think he is doing the best. I suppose by this time you have written a long and a strong letter to Andy strive and do your best to bring him home.  I will do my part as far as I can understand he would as soon be in the army as out of it because he drinks and can get enough of it and nothing to do and soldiers in general does and loves to lead this sort of life.  They do not care how the world goes if they get porter to drink and I think Andy is a real specimen of what I picture an unfortunate soldier to be.  If he was desirous of getting on all right and of pushing forward he would be well above the Rank and file years ago and in this Regiment.  In fact if he was a good character even, and a man of his Education he would be obliged to take promotion and not to thank him.
For the last month I have been pretty busy up to now.  I have completed my Annual Course of Musketry last week and a General’s Inspection going on today and tomorrow so after tomorrow I will have very easy times of it again.  Nothing strange here.  If I go home in April I will get a furlough of two months in the summer it will be splendid.
Nothing more this time.
I remain yours,
J. McK Sergt.
That’s nice, isn’t it?  I bit of chitchat about the family, nothing much for a soldier to do, looking forward to the regiment being posted home soon and two months off in the summer.  How wrong he was.  Look at the date: 28th January 1885.  Two days earlier in Sudan, Khartoum had fallen to the Mahdist forces and General Gordon, the British Governor-General, had been killed.

Do you know about the Sudan Campaign?  I must admit that until I began reading about it for this post my only knowledge was the 1966 film Khartoum which starred Charlton Heston as General Gordon.  You can read about it here but in short, the British government supported the Turkish-Eyptian administration which ruled Sudan in the 1880s and so when the Sudanese people revolted against the administration, the British army was mobilised.  The Sudanese were led by Muhammad Ahmad, who had proclaimed himself the Mahdi, the promised redeemer of the Islamic world, and so this conflict is also known as the Mahdist War.  Still with me?  Thank you!  Actually, that is another lovely reason why I research my family history - it increases my knowledge of all sorts of other areas.

So, on 27th February Jack’s regiment sailed to Alexandria in Egypt and shortly afterwards, he wrote this letter to Pat –
Ramseh Camp Alexandria
Tuesday 11 March 85
Dear Pat,
I suppose that these days you are anxiously awaiting a letter from me and watching the daily prints of any strange news from the front is published.  Well I am a good way from the seat of war even still.  But I do not know how long I am going to remain here.  I am 6 miles outside the city under canvas at present.  Well I will not write at much length this time.  I had a splendid voyage out from Gib. and Alexandria is a beautiful city notwithstanding the injuries it received at the Bombardment in ’82.  Our camp is situated on a field where a battle was fought in ’82 against Arabi Pasha.  The graves are to be seen and numerous human bones are scattered about the field being rooted up by the dogs.
The country is very nice and some very rich land about.  Duty is very light here.  It is not very hot.  The people are very curious in their customs and manners.  You could not find one in a hundred wearing a trousers men and women dress alike.  The women have their faces covered that is the only way a stranger could distinguish them.  There is a rumour about to say that we are getting a draft of 80 men from Ceylon whether it is true or not.
I would have written on Sunday only I found that a letter posted on Wednesday will go as soon as if on Sunday and that mail will fetch it to you in 5 days.  So you will have this sooner than you think.
I am writing to Jamesy by the same mail.  I will send you a long letter next time and give you an account of many things.  Write soon and you ought to have a good lot of news for me now including home news.  I am pushed for notepaper and my writing desk is the ground so that accounts for my poor scribbling.
J.McKeon
We disembarked on Saturday last.

See how his tone changed over those few weeks?  I imagine that seeing the dogs rooting up the corpses not three years old must have been a bit grim, brought home a few truths.  And note how this Irish farm boy told his brother about the very nice country and the rich land.  I don’t suppose it looked a bit like County Roscommon!  The good news is that the 1st Battalion did arrive from Ceylon and that Jack survived the battle.  A year later, the regiment was posted to the East Indies.

There is more to tell about Jack – his marriage, his Boer War experiences, his eventual retirement from the army, but I shall save those stories for another time.  I can also tell you about his brother Andy, the “unfortunate soldier”, there’s a fascinating letter there, now in a museum in Montana, and a little about James and about Pat; Bedelia too, even though I don’t really know who she was!  And how am I able to tell you these stories?  When Pat died in 1944, the letters were returned to Jack’s next-of-kin, his daughter, Alice, who tucked them away in her bureau.  When Alice died her daughter inherited the bureau but I don’t think she went through its contents, it just sat in her living room until she died, when her sister went through it and found the letters.  Then they were passed to me, the family historian, for copying, transcription and safekeeping.  I am going to leave you with this photograph of Jack, taken about twenty-five years later. This jacket was red, how fine he looked... 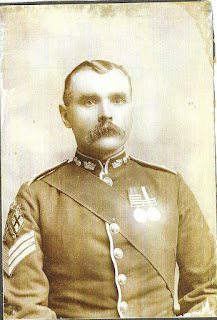 You see, Jack was my great-grandfather.  Dark hair, like my own, hazel eyes, like my own...I carry his Irish genes.  (Actually, the women in my family are all really good talkers and the Best Beloved calls that our “Irish gene”!)
See you soon.
Love, Mrs Tiggywinkle x
Posted by Mrs Tiggywinkle at July 07, 2015