Hello, thank you for calling in.  It's very cold here now but I guess that's all relative, if I lived in Siberia I may think it positively balmy.  We are not downhearted, oh no, the skies are blue, the sun is shining and I have my vest on and my muffatees so I am just fine.  Snowdrops, daffodils and crocus are all blooming their heads off and I am smiling my thanks right back at them.


I have had a birthday.  I do believe in birthday celebrations, one day of the year to let someone know how loved and special they are, a day to feel like a queen or a king.  Just one day of the year.  In our house, birthdays always begin with a celebratory breakfast, even on a school day; we get up early together and eat warm croissants with butter and jam, cards and gifts are opened and cooed over and the birthday girl or boy then heads off out with a spring in his or her step and a heart full of love.  This year, however, was to be different: for the first time since 1989 I would not be seeing either of my children, so I was feeling a little forlorn.  I needed to plan something different - as a wise woman said to me, it couldn't be the same but it could be just as good.
Don't get me wrong, the Best Beloved offered to get up early and heat up croissants, but he leaves home before 7am and I really didn't want to get up that early, so I declined his generous offer.  Instead, I rose at a civilised hour and came downstairs to find a vase full of flowers on the table.  This was a beautiful surprise as frugality has meant no gifts for a couple of years and I really wasn't expecting it.  The kitchen was full of the smell of newly baked bread as the Best Beloved had made a wholemeal loaf in the breadmaker overnight.    I ran a bath full of bubbles, switched on the radio and spent a glorious soak with a large mug of Earl Grey and a book.  Bliss.  I took some congratulatory 'phone calls.  At about 11.30am I cooked myself a rather scrummy brunch: toasted bread, butter, smoked salmon, poached eggs and baby plum tomatoes, a veritable feast, and I sat at the kitchen table and ate it very slowly from one of my best Royal Doulton plates, enjoying every mouthful, while I opened my cards and gifts. 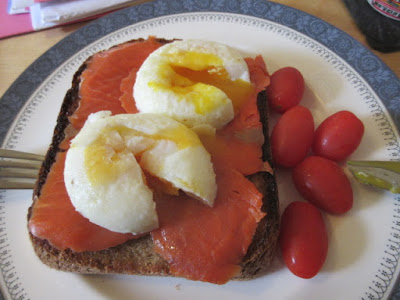 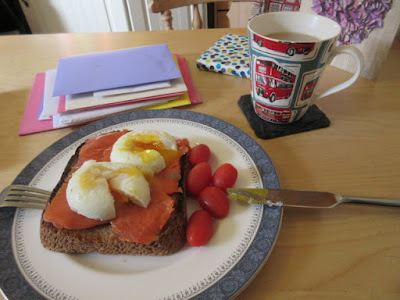 It was a special treat.  Outside the window, clouds were scudding across the blue sky but the sun was doing its very best to shine behind them. 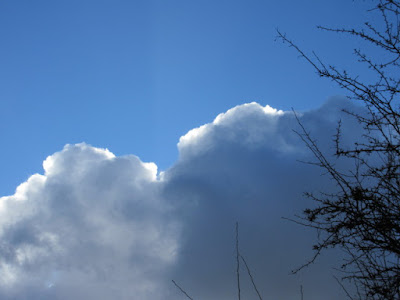 No photoshopping here - the sky was really that blue.
A little later, I went to work.  I stopped at the greengrocer's shop on the way and bought bunches of daffodils, tied some ribbons around them and gave them to my colleagues when I got there.  They were a bit perplexed until I explained that it was my birthday, that I had received a lot of happiness and I wanted to spread it around.  They understood.
In the evening, the Best Beloved and I went out for a meal, another lovely treat, just the two of us, and when we got home we spoke to The Mathematician on Skype.  It was a strange day, unlike other birthdays I have had, and I would be lying if I said that I didn't miss our girls, but it was a good day.  Different, but good.  Time is moving on and I am moving with it.
See you soon.
Love, Mrs Tiggywinkle x