The Tiniest Church in Wales

Hello, thank you for dropping in, it's always lovely to see you.  The sun is shining as I write this, actually shining, and for the third consecutive day!  Oh yes, I feel that spring is definitely around the corner.
When the Best Beloved and I went to Anglesey during half term we planned to stop on the way and visit the tiniest church in Wales, Capel St Trillo at Rhos-on-Sea.  "It's on the promenade, just west of Rhos Point," I said to the Best Beloved.  So we drove all the way along beside the promenade until we had left Rhos-on-Sea behind and reached Penrhyn Bay, but we didn't find the tiny church.  We turned the car around and drove all the way back along beside the promenade, but still we couldn't see the church, so we stopped the car, dug out the satnav, programmed in the church and set off along Marine Drive for the third time.  "It's here!"  I said when we reached our destination.  "Where?" said the Best Beloved.  "It must be here," I replied, "Satnav says so."  We parked the car and then I saw this sign - 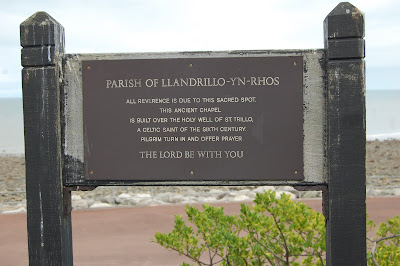 and when we got out of the car and peeped over the wall, we saw the little chapel, hunkered down against the stonework - 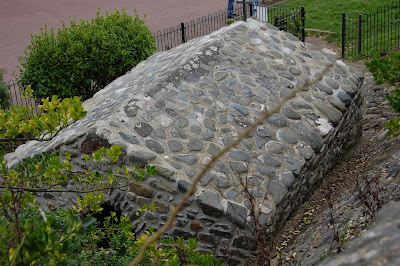 It's no wonder we almost missed it.  We walked down the path to the prom and found that the chapel sits in a tiny churchyard, too small for a burial ground but big enough to declare its presence - 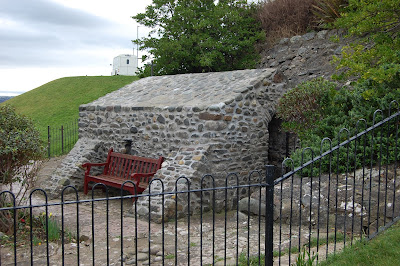 Very little is known about St Trillo (pronounced Trith-lo).  Born in the sixth century, his father was a Breton prince and Trillo and his siblings came to Wales with St Cadfan as his students.  Trillo found a well here in about 570 AD and built an enclosure around it, covering the well itself with a tiny cell, probably made of wattle and daub.  It is likely that the well was the only one in the area, which kept it in use after Trillo left in 590 AD, and certainly pilgrims came here for the water's "miraculous" healing properties.  Eventually, a stone structure was built, although nobody seems quite sure when, and in 1756 Thomas Pennant, the Welsh naturalist, traveller and writer wrote this:

"Saw, close to the shore, the singular little building called St Trillo's Chapel.  It is oblong; has a window at each side, and at the end; a small door and a vaulted roof paved with round stones instead of being slated.  Within is a well.  The whole building is surrounded with a stone wall."

Any visitor today would recognise the chapel from that description, although the building was comprehensively restored in the 1890s, having become quite dilapidated.  It was reconsecrated by the Bishop of St Asaph on 16th June 1935.

So there is my potted history of Capel St Trillo.  I stood in the doorway and looked in and this is what I saw - 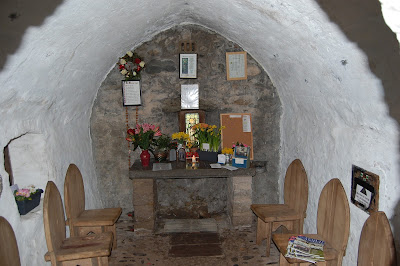 "Tiny" is definitely the right word":  the chamber measures 11' x 8', that's smaller than my bedroom, and seats six people, although I believe they can squeeze more in if the chairs are removed!  There were flowers on the windowsills and on the altar, some with cards explaining that they had been given in memory of a loved one, or to celebrate a family occasion; also on the altar were a cross, a lighted candle, prayer cards with pens and a noticeboard inviting you to pin your prayer requests there, where they would be used in the communion service every Friday before being passed to the Mothers' Union Prayer Group, which meets weekly.  Beneath the altar is the holy well. 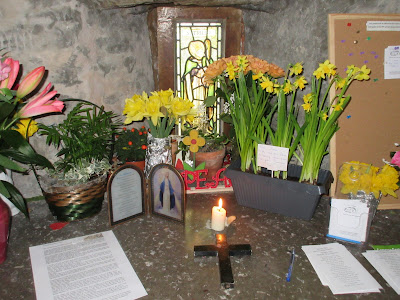 That's what struck me most about this chapel: not its past but its present, the fact that it is a vital, living, caring church.  Capel St Trillo may not be the smallest church in Britain but it is the smallest active church in Britain as at least one service is held here every week.  Somebody cares enough to keep it swept and clean, to remove the dead flowers and refresh the vases, to offer prayers for those who visit, to hold that weekly service.  Water is drawn from the well for baptisms in the parish.  As I entered, I was overcome with a wave of emotion and found myself fighting back the tears which filled my eyes and I couldn't understand why, but when I talked it over with the Best Beloved that evening, he said that it was because of the love and care which I felt there.  Perhaps St Trillo hasn't left, after all?
After I left the chapel we sat on the prom for a while, watching the cormorants which come to feed on the extensive mussel beds between the shore and the sea.  The Best Beloved went to investigate some ancient wooden stakes among the stones on the beach - we think they may be remnants of the fishing weir which was here for more than seven hundred years before it fell into disuse during the First World War. 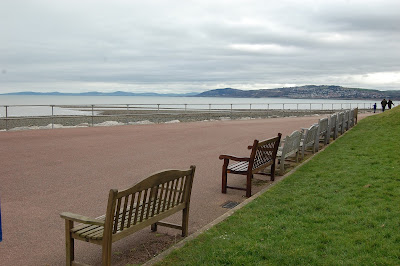 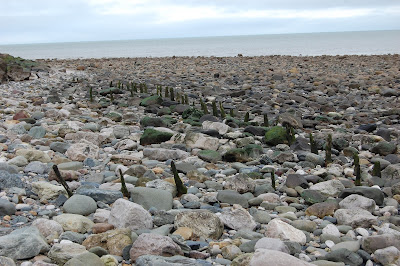 All this time there was a steady stream of visitors going in and out of the chapel, solitary walkers, families, grandparents with young children, young couples.  I realised that I was fortunate to have been able to spend some minutes in there by myself, and I felt pleased that this special place continues to attract pilgrims more than 1,400 years after St Trillo left to carry on his mission elsewhere. 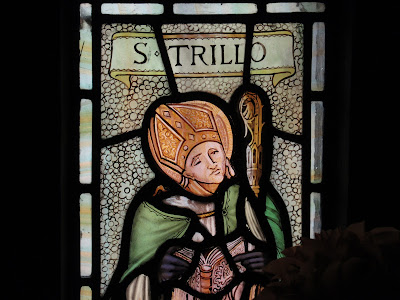