I Crocheted A Rainbow 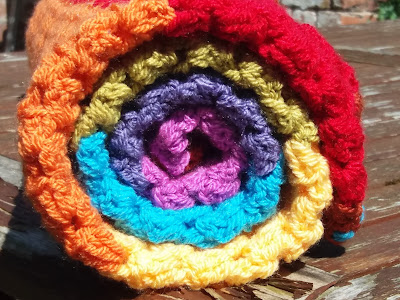 When The Teacher told me that her friend was pregnant I decided that I wanted to crochet a blanket for the baby, something soft and snuggly to play on, sleep beneath and wrap up in.  I have been learning to crochet for a year or so, dipping in and out of a project, but deciding to actually finish something, before a deadline, spurred me on to develop a level of skill that would produce something good enough to give to somebody else.  So, I looked around the internet for inspiration and found these gorgeus rainbow blankets made by Heather at Little Tin Bird.  As soon as I saw them, I knew that I wanted to crochet a rainbow: The Mathematician says that rainbows make people happy and what better wish is there for a new little person than happiness?

I followed Heather's colour scheme to the letter: Stylecraft Special DK in lipstick, spice, saffron, lime, turquoise, violet and magenta, ten rows of trebles in each colour.  I began at home, sitting in front of the computer and trying to master a chainless foundation row, frogging it, trying again, frogging again, beginning again... six or seven times before I had a smooth, straight(ish) row of 104 stitches.  Your comments after I showed you my first stripe of magenta in April encouraged me to keep at it.  I was glad when I reached the yellow because until then, it looked like a peacock and whilst I love peacock colours, I wanted to give the baby a happy rainbow. 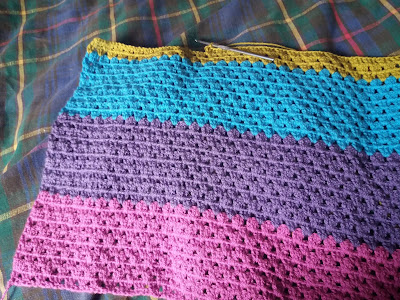 All the hours I spent in the passenger seat of the car during April were spent mastering the hook and Knit and Knatter on Thursday afternoons became Crochet and Cnatter.  I crocheted in the summerhouse, on the sofa and in bed. 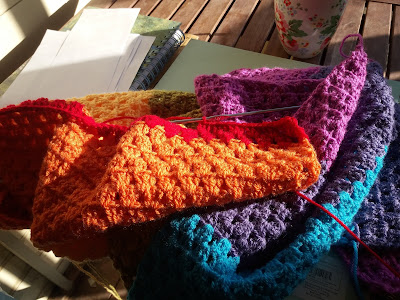 In a fortnight, the blanket was done.  I sewed in the ends and thought about a border.  I am not very good at choosing colours and with so many colours in the blanket itself, I didn't know what to do, although I was repeatedly drawn back to a ball of copper-coloured yarn.  Neither did I know how to make a border.  So, back to the internet I went and when I saw Lucy's spot on edging over at Attic 24 I had a flash of inspiration: the small tortoiseshell butterfly has a row of turquoise spots around its wings.  I wanted to crochet a border of turquoise spots within a copper band, butterfly wings to enclose the rainbow.
So without further ado, here is the finished blanket, a rainbow held in a butterfly's wings.
TA-DAAAAH! 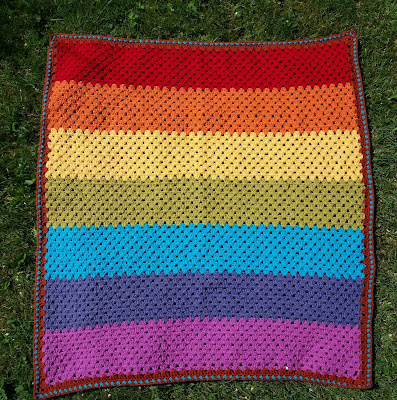 I know that it's not perfect, it's only three simple stitches and many of you make far more complex and delicate things with your hooks and yarn, but I am SOOOOOOOOO ridiculously proud of myself.  This blanket makes me happy every time I look at it.  I hope that it makes Baby Nate happy too. 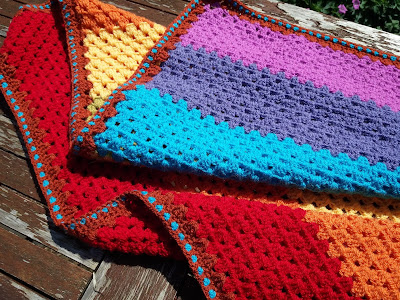