Hello, thank you for calling in.  Is all well?  Thank you for your comments on  my last post, especially for your condolences.  My bookish aunt's funeral went well: my cousin played some Ravel on her flute, I gave my well-rehearsed eulogy without embarrassing myself (crying / falling over / leaving my skirt tucked into my knickers) and as at all the best funerals, there was some applause and some laughter as well as some tears.  I think we're going to be all right.
During the half term holiday the Best Beloved and I went camping in Somerset.  We went there for the first time last year and enjoyed it so much that we decided to return to the same campsite in a rural spot on the Levels.  As we turned down the lane, bounded by green hedges and frothy cow parsley, a small rabbit hopped ahead to show us the way  to the empty camping paddock and I instantly relaxed into happy holiday mode.  There were the ponies, the alpacas and the swallows, just as last year, and there was the view across the Levels to Glastonbury Tor, just as last year. 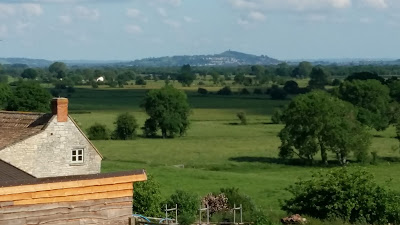 Ah, that view.  We had intended to eat out a couple of times but in the end we didn't bother because, as I said to the Best Beloved,  we wouldn't find anywhere with a better view than the one from our tent, so eating dinner whilst watching dusk settle over the Levels was our nightly pleasure.
The view was a morning pleasure as well, particularly at 5am on our final morning, when it looked like this - 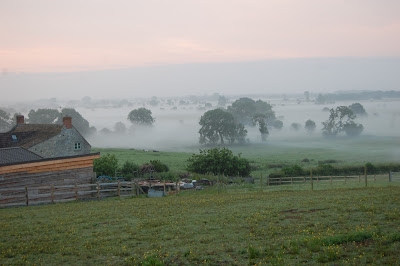 Behind our tent was a field which two friendly horses shared with quite a lot of hoppity bunnies and...a harrier jump jet.  I kid you not.  The campsite owner bought it on ebay a few years ago and is restoring it.  The aeroplane lives in a hangar but two fuel tanks lie casually by the gate. 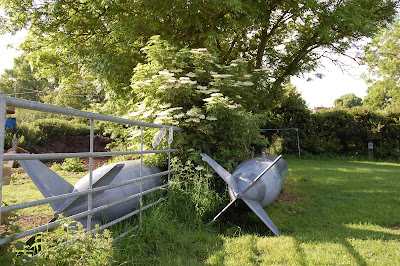 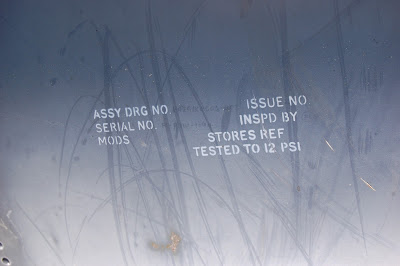 We drove out to the coast one day and visited Watchet, a pretty little town whose harbour inspired Samuel Taylor Coleridge to write The Rime of the Ancient Mariner.  We sat by that harbour and watched the comings and goings while we ate our sandwiches, we visited the little museum, one of those which is firmly rooted in the history of its place, and later, we sat in a pub courtyard and drank chilled cider.  'Twas a very good day. 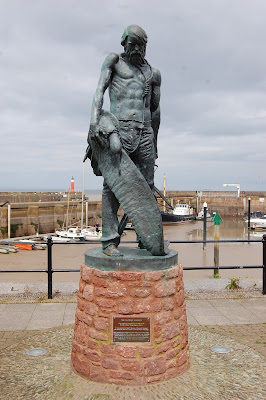 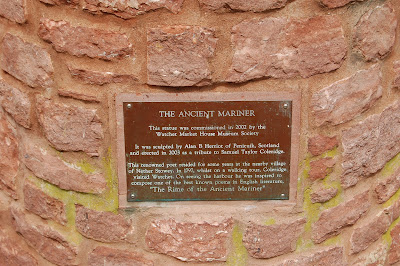 On a gloriously sunny day we visited Wells Cathedral and marvelled at its twelfth century architecture.  In a rather tense situation involving satnav, wifenav, an unfamiliar town and a very busy carpark "we" (by which I mean "he", obviously) managed to leave the camera in the car so the Best Beloved had only his 'phone for photographic duties. 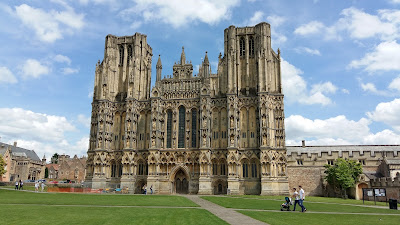 The scissor arches in the nave were "a medieval solution to sinking tower foundations", according to the guide. 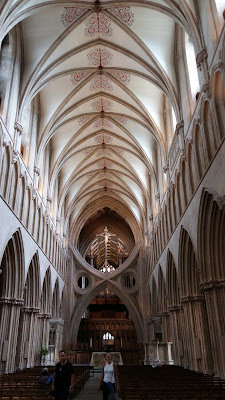 ﻿
We arrived in time for an organ recital and were invited to sit in the quire to listen.  The quire is the oldest part of the cathedral and the seating is usually roped off, so this was a very special treat. 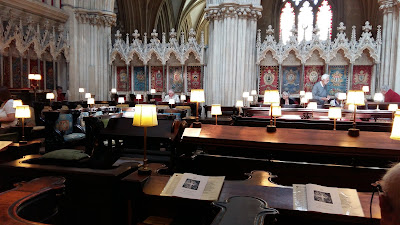 I am not a great fan of organ music but to hear a skilful, professional organist (Robert Gower) play the right music for the right instrument in the right place and to hear the sound fill the space was another treat.
The cathedral has "one of the most substantial collections of medieval stained glass in England". 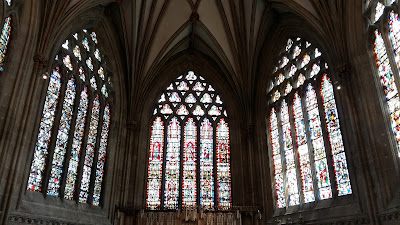 Wells was lovely and I think we shall have to return, with the camera so that we can take some proper photographs, preferably when there is an organ recital.
See you soon.
Love, Mrs Tiggywinkle x
Posted by Mrs Tiggywinkle at June 10, 2017