Acton Burnell is a small village in a very quiet part of Shropshire.   If you lived here, your address might be 12 Acton Burnell, for there are so few houses that street names are not needed, and yet once this was the most important place in England.  I'll just let that sink in for a few seconds... once, Acton Burnell was the most important place in England.
The Best Beloved and I went there one sunny April day at the end of a long and difficult week.  We drove along the village street, turned down the lane, passed the ancient church and parked when the lane ran out.  We got out of the car and found a little gate which led us into a shady thicket, perhaps it was an old, overgrown shrubbery?  Following the path, we emerged into the sunlight and saw this, Acton Burnell Castle - 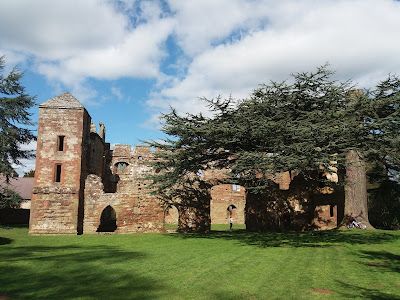 Robert Burnell was born in Acton Burnell in 1239, one of four brothers.  He became a priest (which was, after all, a way to get a good education) and worked in the household of Prince Edward, the son of King Henry III, and when he was eighteen years old he was appointed the prince's chaplain and private secretary.  The two young men were the same age and became close, Edward appointing Robert his Chancellor in 1265, so when Edward went off to Tunisia to fight in the Crusades in 1270, Robert was one of four men appointed to look after his interests in England while he was away.  When King Henry III died in 1272, Robert became one of the Regents of the kingdom and was responsible for supervising Parliament in the absence of Edward, who was now king, and upon his return from the Holy Land, King Edward made Robert the Lord Chancellor of England, his chief advisor and administrator.
In 1275 Robert became Bishop of Bath and Wells and his thoughts also turned to the village in which he was born.  He bought the manor of Acton Burnell and rebuilt the church, which was dedicated to St Mary, laid out the village and built himself a rather grand home, surrounded by an outer wall and a moat.  The wall and the moat are long gone, as are the outbuildings, but the red sandstone ruin of the block which housed Robert's private apartments still stands. 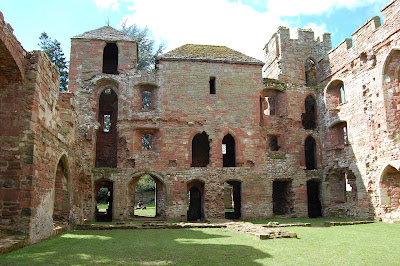 In 1284, Robert was granted a licence to crenellate, which gave him permission to add battlements to his home.  This sign of his high status would have looked very impressive and some homes were crenellated simply for this reason, but remember that we are close to the Welsh border here and 1284 was the year in which King Edward conquered Wales after several years of fighting, so Robert may have had genuine military reasons to fortify his home. 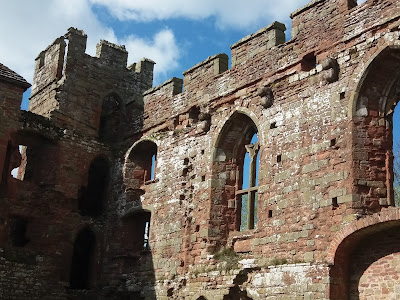 Although you can't tell from the photographs, there were actually a fair number of visitors while we were there.  There were several families with children of all ages from tots to teens, older couples and a very young couple who arrived on bicycles with a picnic in their backpacks.  Next time we go, the Best Beloved and I will take a picnic because it is a perfect spot on a sunny day, bounded by fields, the thicket, the churchyard and the grounds of a private school (remember the school as I shall come back to it).  We picnicked here with The Teacher when she was very small and she loved clambering over the empty windowsills and running through the empty doorways. 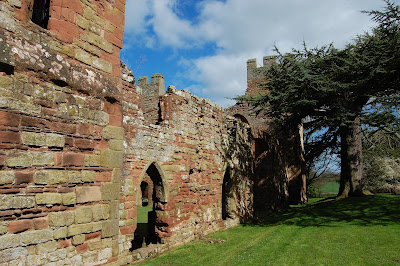 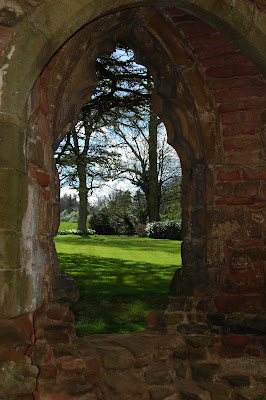 After spending a while sitting in the sunshine, listening to laughing children and chattering birds, we walked back up the lane to the sandstone church - after all, I do like to visit a church! 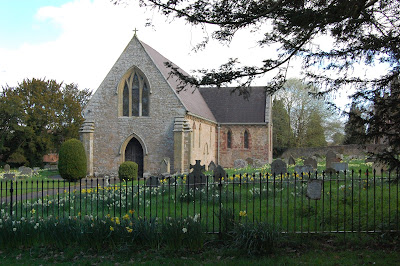 To be quite honest, and I am whispering this very quietly, I was a bit underwhelmed by the interior, although the north transept contained some fascinating memorials, including the finest medieval brass in Shropshire on the tomb chest of Sir Nicholas Burnell, who died in 1382. 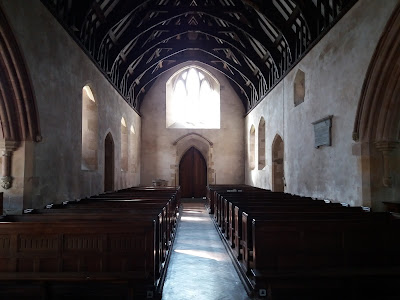 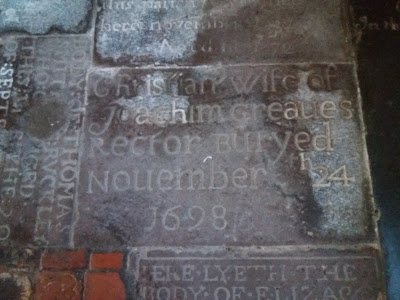 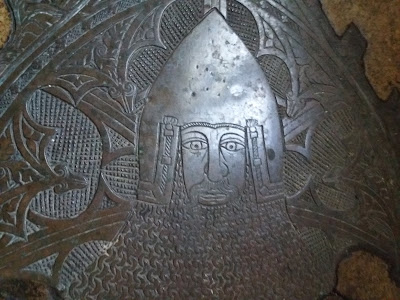 There are also some rather grandiose marble memorials of members of the Lee family, including this one for Sir Richard Lee who died in 1591. 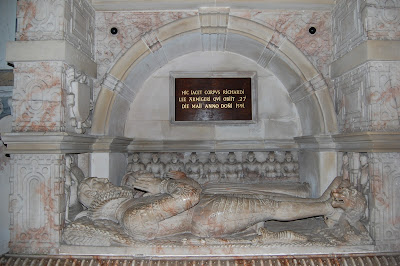 The manor of Acton Burnell eventually came into the hands of the Lee family of Langley, less than two miles away, and you might remember that I wrote about Langley here when I visited Langley Chapel in January.  They had no need of a grand residence in Acton Burnell as they lived in Langley Hall so the castle, which had been abandoned in the fifteenth century, was left to gently decay, although the family still used the parish church.  It is this Lee family connexion which explains this plaque - 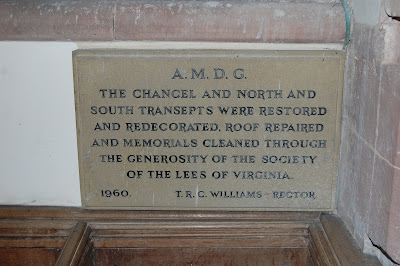 It used to be believed that Richard Lee, who emigrated to Virginia in 1639, made a fortune out of tobacco and is an ancestor of General Robert E. Lee, was a member of the Shropshire Lee family, although I think that research in the 1980s revealed that Richard's direct ancestry was actually in Worcester.
When Mary Lee married Edward Smythe, Acton Burnell and Langley passed to the Smythe family (women were not allowed to own property in England until 1870 so anything Mary inherited went straight into the ownership of her husband).  Their descendant Richard Smythe left Langley and built Acton Burnell Hall in about 1700, right next to Robert Burnell's castle, which became something of a picturesque folly, although it was obviously put to some practical purpose because the tower with the pyramid roof was used as a dovecote.  Acton Burnell Hall was rebuilt in the 1750s and remained in the Smythe family's ownership until 1939 when they sold it, although they retained the rest of the property.  They sold most of that in 1949 but retained the landscaped park which had been improved during the rebuilding in the 1750s.  Acton Burnell Hall was sold on in 1973 and is now that private school I mentioned earlier.
Fifty metres apart, in the grounds of this school stand the ancient gable ends of a very large stone building which is traditionally known as "the parliamentary barn" and it is these incongruous ruins which are really the most important stones in Acton Burnell. 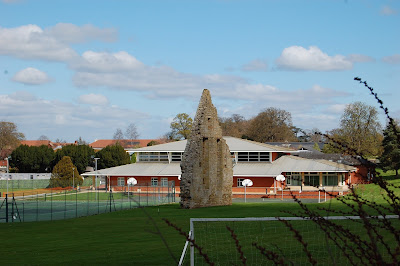 In 1283 King Edward I needed to raise money for his expensive military campaigns in Wales and Scotland and so it was decided that a new tax should be levied.  Edward needed the support of his citizens to raise this tax so he had to call Parliament to pass a new law.  At that time, Parliament met wherever the king was so Edward came to stay with his friend and Chancellor Robert Burnell at his lovely new home and his nobles and bishops came too.  The important fact about this meeting of Parliament is that for the first time ever, commoners came too, representatives from each city and town in the land.  A large building was needed to accommodate everyone and tradition has it that they met in the tithe barn, although, frustratingly, there is no documentary proof.  Some historians believe that the lords and bishops met in Robert's castle while the commoners met in the barn, while other historical scholars suggest that the building was not a barn at all but a new great hall built by Robert specifically for the parliament to meet together. 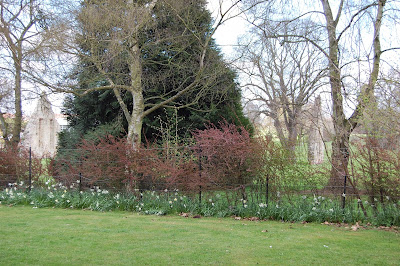 Wherever Parliament met, it was the first time in England that untitled people participated in creating a new law, and Robert Burnell's hospitality must have been well-received because Parliament came back to meet here again a couple of years later.  That first meeting resulted in The Statute of Acton Burnell, or The Statute of Merchants, which was intended to attract foreign merchants and increase trade  by allowing for debtors to be imprisoned until their debts were repaid.  (If you are familiar with Little Dorrit or the Marshalsea, you will know about this!)
Acton Burnell Castle is in the care of English Heritage and is free to visit.  If you go in the spring, the churchyard is full of daffodils as it holds a national collection of narcissus; if you go at any time of year, you are visiting somewhere that in 1283 was the most important place in England. 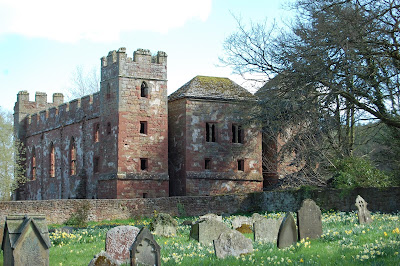