A Visit to The Greek Orthodox Church in Shrewsbury

Hello, thank you for dropping in, it's always lovely to see you.  The weather here has been sunny and rainy and windy and calm and warm and chilly and we have even had hailstones, but we are thankful that we don't get hurricanes and we are counting our blessings.
We have had a busy time: The Mathematician came home last week after a three-week tour of Europe.  There is great energy in our house when she is here, which is great but can sometimes be just a teensy bit tiring!  She has been putting everything in place for her return to university in a few week's time and I am increasingly aware that she won't be in this nest for very much longer as she already has a job lined up for next year, after she graduates.  I am trying to hold on to every last little scrap of her that I can.
The weekend was a busy one but as it was Heritage Open Days I was determined that the Best Beloved and I should fit in a visit somewhere.  This annual event describes itself as "England's largest festival of history and culture", when "places across the country throw open their doors to celebrate their heritage, community and history" and I am always surprised by how many of my friends are unaware of it.  Perhaps the marketing isn't good enough?  In the past we have visited some gems which are not usually open to the public, a National Trust property without having to pay and, last year, the church at Melverley where we heard a talk about its history.  This time we needed a place which was open on Saturday, not too far away and not too big as we only had a couple of hours to spare, so I went online to find out what was available.  I found the perfect place: the Greek Orthodox Church in Shrewsbury. 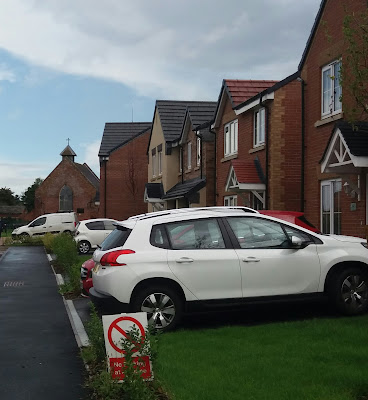 So, on a rainy Saturday lunchtime we parked the car in a lane and found ourselves walking through an estate of very new houses with very shiny cars parked on their driveways.  We followed the path and at the end of the road, rather incongruously, we found what appeared to be a small, medieval parish church, which indeed it was until it was virtually abandoned in the nineteenth century - the parish registers are empty after 1870 - but by the time it was purchased for £50 by the Community of The Holy Fathers of Nicea the First Ecumenical Council in 1994 it was being used as an agricultural storage building.  There was no glass in the windows, the door was not original and didn't fit properly, there were holes in the roof and in the internal plaster, the floor was rotten, the west wall was dangerously bowed, the internal walls were black with dirt and stained by water leaking through the roof and the building was full of unwanted agricultural clutter and squirrel droppings.  However, sad and neglected though the building was, it's history was lengthy and showed that this had been a spiritual place for thousands of years.
Standing outside the south wall, Father Stephen showed us the line of stones at its base which were laid in Saxon times; above this line were the stones laid in the twelfth century and above the windows, the stones laid when the church was restored in the sixteenth century, in 1545, when Henry VIII was King of England.  The bricks which formed the west wall were laid in the early eighteenth century, in the first year of the reign of Queen Anne, elegant, red, smaller than modern bricks.  Believing the church to date from the Saxon period, between the fifth century and the eleventh century, the Community felt that they were returning the church to its original, Orthodox purpose.
(For those of you who know as little about Orthodoxy as I did last week, I think I should explain here a little about the Orthodox Church:  in 1054 the Christian Church divided into two factions, an event which is known as the East-West Schism as the traditional Eastern Orthodox Church separated from the Western, Latin Church, which eventually became the Roman Catholic Church.  Father Stephen explained to us that therefore, all churches built before 1054, as this one was, were Orthodox churches.)

However, an archaeological dig carried out earlier this year revealed that the land the church stands on has been used for ritual purposes for more than four thousand years!  A wooden post was dug up and sent away for carbon dating and as Father Stephen has written, "We were expecting this to be about 700 AD.  The results have now come back and to our total astonishment it turns out to be dated to 2033 BC - a time when the ancient Egyptians were still building Pyramids about 4,000 years ago.  This makes it late Neolithic / early Bronze Age."  Wow!  The discovery was linked with excavations carried out in the 1960s and 1970s which revealed prehistoric burial mounds and cremations, slots for standing stones and a processional way.  I felt a bit peculiar when Father Stephen explained all this to us as I realised that my feet were standing on land which had been trodden by those worshipping their deities for thousands of years before me, and the cup of tea I was then brought by one of his church members was most welcome, I can tell you!

The church was restored in 1996 and a bell tower and gallery were added, as well as a carved icon screen, which incorporates some of the wood from the old oak floor joists and pews, and a new holy table.  The restoration work revealed fourteenth century wall paintings which had not been apparent beneath the grime and the stains, and these were conserved in 2005.  The Community has added its own painting to the walls and icons have been painted by Aidan Hart, a well-known iconographer who is a member of the church.  I had never been inside an Orthodox Church before and what I found there was very beautiful, a building which honours its past whilst serving its present.  I also found warm, welcoming people who served us refreshments and honestly and openly answered my naïve questions about their church. 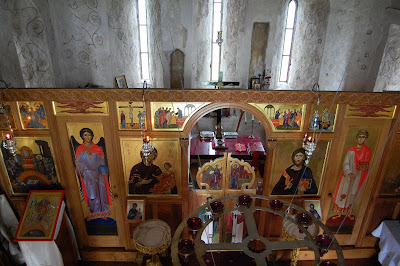 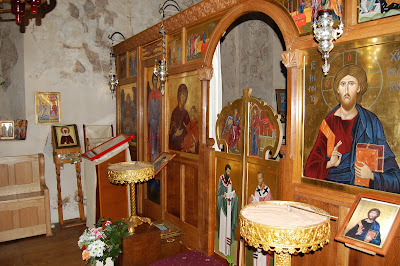 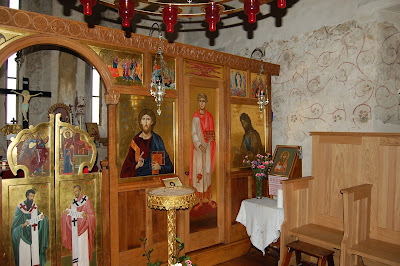 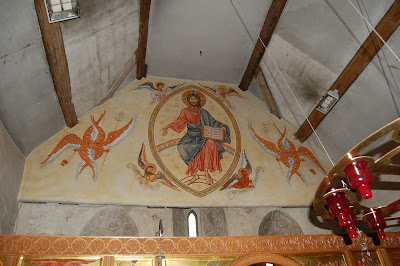 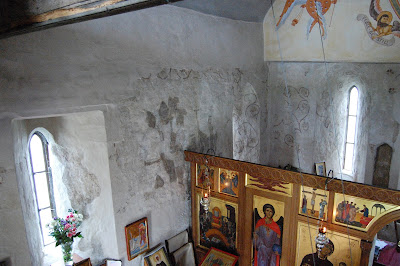 The wall painting you can see on the left of this photo depicts the murder of St Thomas a Becket and is the oldest figurative painting in Shrewsbury, painted sometime between 1375 and 1385.
I was happy to find there icons of our local female saints, St Winifride and St Milburga, and, best of all, St Melangell, with whom I am a teeny bit obsessed at the moment - I have visited her shrine church twice this year but haven't yet found the right words to share those visits with you.  Perhaps this image will inspire me? 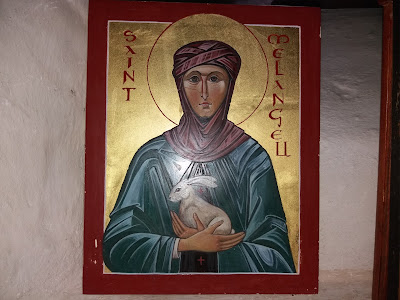