Half Term Holiday Highlights (and Lowlights)

Hello, thank you for calling in, it's good to see you here.  Rough winds are shaking the last darling leaves from the hawthorn tree outside my window and I think it will be bare by the end of the day, leaving its twiggy skeleton stark against the grey sky.

During half term week the Best Beloved and I took ourselves, just ourselves, away to Anglesey for a few days.  This was our main holiday this year - we had planned to go during August but the arrangements fell through, so I was really looking forward to this break on the island I love.  I booked a lovely little house through Airbnb, a little house we have stayed in before, so we knew exactly how lovely it would be.

We travelled on the day Storm Brian made his presence felt along the west coast of the country.  Now, we do like "weather", in fact, I have been known to describe the Best Beloved as "a weather anorak", so we were not put off by this and, making sure that we had appropriate clothing to enable us to cope with "weather", we set off early and excited and drove to South Stack on the northwest of the island.  We wanted to watch the storm over the sea, see the waves crash against the cliffs and the lighthouse.  There is a good café there and we planned to have a pot of tea and watch the storm hit the lighthouse out of the window.  However, when we arrived and parked the car, this was the view through the windscreen - 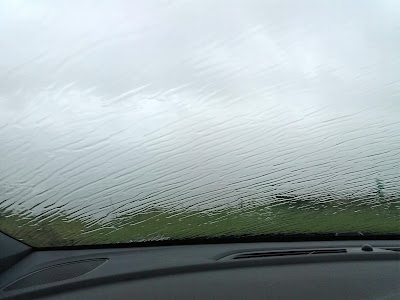 We actually ventured out of the car, which took a while because the wind was so strong that we couldn't open the doors so we had to wait for it to die down!  Once out in the wind, the raindrops hit my face painfully like needles, so we didn't last long before we fell back into the car, bedraggled and laughing.  Unfortunately, the café was closed, presumably because of the storm, and there was no point in sitting in the car park to watch the view because there was no view to be seen, so we started up the engine and meandered down the west coast of the island.  We stopped at Porth Dafarch and wondered at the waves.  The Best Beloved bravely stepped out of the car to bring you this photograph - 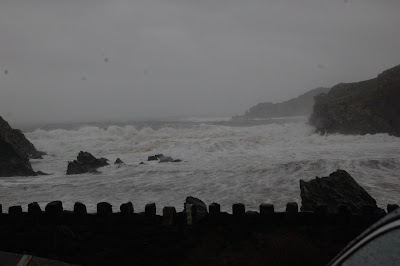 Our next stop was Cable Bay, one of my favourite places in the whole world.  The last time we were here, in July, we lay on the beach in glorious sunshine anointed with suncream, but not today; today the weather was so fierce that we didn't dare raise a camera lens.  By now I was desperate for a cup of tea and so our meanderings led us to the charming Riverside Café at Malltreath where we found a warm welcome and a delicious cream tea. 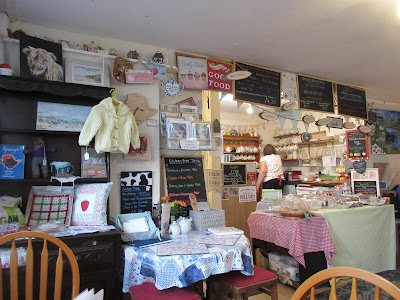 Generously refreshed, we drove to the lovely little house, unpacked, lit the fire, opened a bottle of wine and settled in.

The following morning, fortified by a good breakfast, we went back to Cable Bay.  The storm had passed but the sea was still roaring.  Having pootled along the beach, head down, looking closely at the piles of kelp and seaweed washed up by the storm, poking through them to find mermaid's purses and whelk egg cases as well as the decomposing leatherback turtle, I sat on the sand in the sunshine and watched the fearless surfers while the Best Beloved walked up onto the headland to take these photographs - 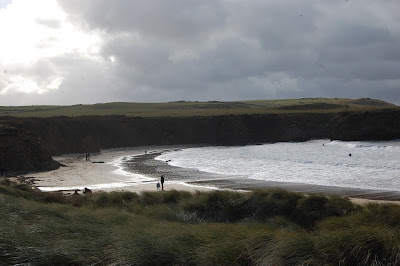 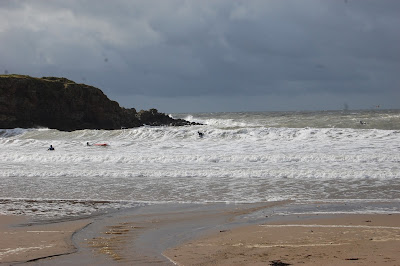 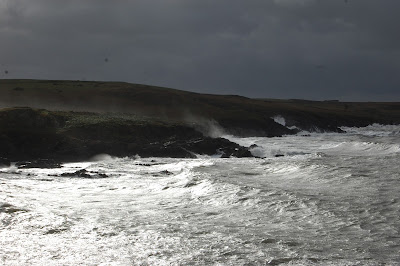 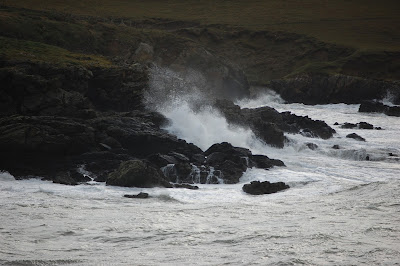 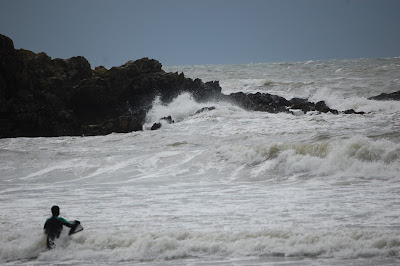 Having thoroughly topped up my vitamin D levels, we got back in the car and drove to Lleiniog, somewhere we hadn't been before.  We parked the car and walked along the track beside the stream, turned through a gate and walked up through a wood.  I love being in the woods in the autumn when the canopy has thinned so the sunlight and the air can swish through.  Up, up, up we went until we reached the ruins of Castell Aberlleiniog.  Built as a motte and bailey castle in the eleventh century and then rebuilt in stone a few hundred years later, possibly in the seventeenth century, the castle is small and there's not much to see,  but it felt good to be up there and we sat on the ramparts for a while.  As many of the leaves had dropped from the trees, we could see through them and across the Menai Strait to the mainland, where a twin castle originally stood. 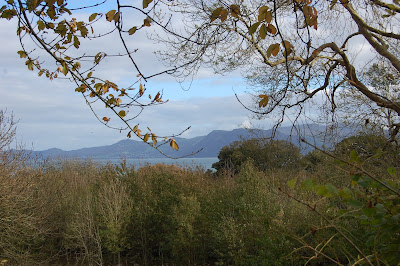 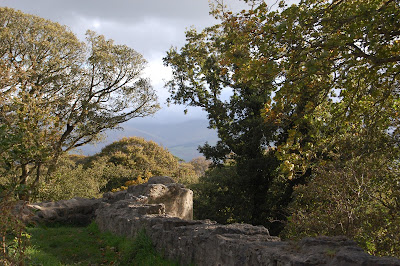 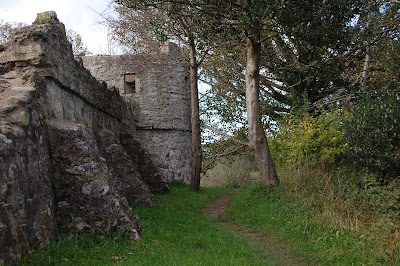 When we got back to the little house, we had bread and butter and lobster for dinner, washed down with a nice glass of wine.  We were living the high life! 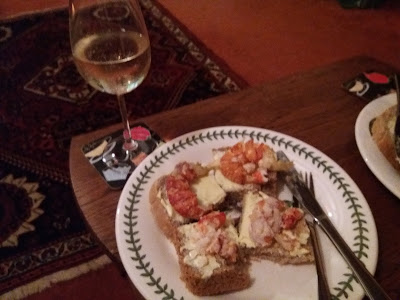 Sorry this photo isn't very sharp but it was taken on my 'phone in very low light - firelight, candlelight and fairylight.

The next day, we drove back to South Stack to visit another place which was new to us as the Best Beloved had spotted a sign which read "Stone Huts" and was keen to investigate.  As we drove up the Holyhead Mountain, we were surrounded by mist and so the Best Beloved chose some suitable music: Misty Mountain Hop by Led Zeppelin.  He couldn't help himself and was chuffed to bits with his artistic choice!  We parked the car, climbed over the stone stile (him) or opened the wooden gate (me) and set off up the track and almost immediately found Cytiau'r Gwyddelod, the Holyhead Mountain Hut Group.  There are twenty stone structures visible here, some partly restored, and they are about 2,500 years old.  Some are domestic dwellings, family homes, some are animal shelters, some are grain stores.  It is a fascinating and very atmospheric place, especially on a misty day.  We talked about how we will bring our family here for a picnic when Tom Kitten is older, we will sit on the floor in a roundhouse and eat Iron Age food, but then we decided that Iron Age food might not be very nice so we will bring 21st century food as well! 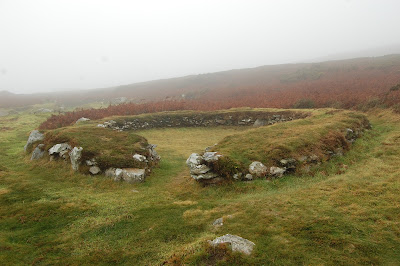 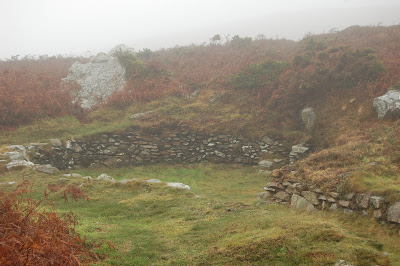 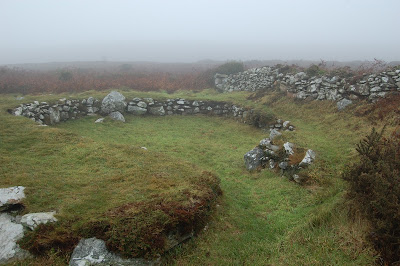 We were ready for a snack so we went to the good café, which was open this time, and were disappointed by a slice of Victoria sandwich which turned out to be very dry.  This is the point at which the holiday started to go wrong.  We bought a bag of logs for the fire but when we opened it at the lovely little house, the wood was damp so we couldn't use it.  That evening, the owner of the house called round to let us know that the water supply had gone off and she was trying to find out why.  She later sent me a text to say that the water company had turned it off to do some planned maintenance work and it would be back on again during the early hours of the morning.  When we woke up, the water was on but it was straw-coloured so I sent the owner a text asking her if it was safe to use.  Her reply was that I should let it run for a bit, boil it or go to the village shop and buy some bottled water.  I'm not stupid!!  I knew that, I wanted to know if she had any further information from the water company!!  Clean water is an essential requirement of any holiday, I think, and I wasn't prepared to take a chance so we went to the village shop where the only water we could buy was an expensive French brand.  Harrumph.

However, the worst experience of all was dinner on our last evening.  We don't eat out very often so I like it to be special.  We went to The Oystercatcher, a fabulous building in a beautiful location, but the food was disappointing and when the staff asked if everything was all right with our meal, as they do, and I explained why it wasn't, they just weren't bothered.  We spent £56 on two courses and left as soon as we could, the last highlight of our holiday well and truly dimmed.

For many years now I have worked for charities and churches and I have been surrounded by kind, caring people.  It's a long time since I was involved in the cut and thrust of capitalism and this holiday brought home to me the fact that I have been living in a lovely, protective bubble which has perhaps left me too thin-skinned to cope with real life.  I don't begrudge anybody the opportunity to make a living but as my money is so hard-won, I do resent people who are not interested in giving me good service in return for it and during this holiday I felt that everyone was just trying to rip me off and that upset me very much.  I had looked forward to this holiday for soooo long and so inevitably, my disappointment was huge.  On our last day on the island, the sun was shining and we had planned to spend the rest of the day on the beaches after checking out of the lovely little house, but I really couldn't bear to spend another hour in a place which now felt so hostile and grasping so we drove straight home instead, where we discovered that our cats hadn't been fed for two days.  I could have wept.  I did.