Hello, thank you for popping in, and thank you especially to those of you who left comments on my last post.  It seems to have generated a fair bit of conversation, both here and in the "outside" world.
Today is 31st October, Halloween, a day which I have come to loathe. When I was a young child in England in the early 1970s it was the day on which we read stories and poems about witches and magic in school and drew pictures of said witches on their broomsticks with obligatory pointy hats and black cats.  By and large, that was it.  We knew that the day was a bit special but what we really looked forward to was Bonfire Night on 5th November.


Then when I was eight years old my family moved to Scotland and on 31st October, after we had eaten our tea, there was a knock on the front door.  When my mother opened the door, she found a group of my friends on the doorstep, dressed up in costumes, who asked if I was coming out guising with them.  Guising?  I had never heard of it, but I liked dressing up and I liked going out with my friends, so it didn't take me long to raid the dressing up box and off I went, bag in hand.  We knocked on people's doors - only the houses of people we knew or people our parents knew - and each of us had to perform a party piece, sing a song or recite a poem, tell a joke or two or perform a magic trick, and in return, we were rewarded with a handful of peanuts in their shells and perhaps a few sweets or chocolates.  Those rewards were why we each carried a bag. 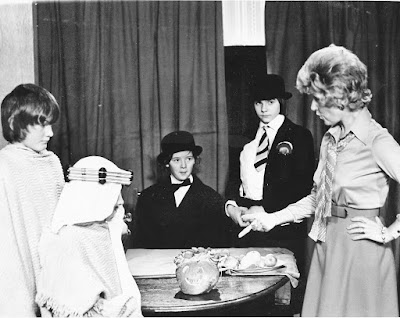 Every home had a bowl piled high with peanuts and some had bowls of water with apples in which we "bobbed" for - traditionally this involved putting your face in the water and capturing an apple with your teeth, no hands allowed.  Yuk!  I can't stand apples so this was double torture for me.  The more modern, and kinder, way was to kneel on a chair, hold a fork between your teeth and let go of the fork so that it dropped into the bowl: if it stabbed an apple, you won it.  Once everyone had performed and had a go at bobbing for an apple, we moved on as a group to the next house.  It was a benign affair with very small children going out with their elder siblings, I can't remember any parents coming with us, and costumes were simply fancy dress of any kind, not limited to the scary.  In fact, I can't remember anyone ever wearing a scary costume in the five years or so that I went out guising - actually, some people did dress up as ghosts, but they were friendly, sheet-over-your-head type ghosts, not really scary ones. 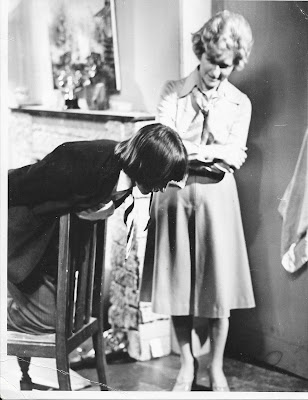 Of course, there were lanterns.  When I was a Girl Guide, there was always a competition for the best lantern.  However, there were no pumpkins for our lanterns were made out of swedes and we lit candles inside them, threaded string through the lids and carried them with us.  Even now, the smell of singed raw swede transports me back to the 1970s.  Although I must say that one year, I won second prize with a lantern made from a hollowed-out melon!  Perhaps my mother couldn't get hold of enough swedes that year (I have three sisters). 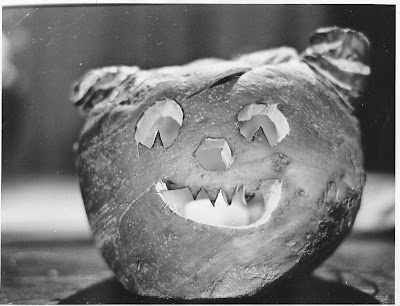 I don't find any of this difficult.  What I know now, and didn't know then, is the relationship between all this and the Christian church: that this is  AllHallowtide.  Ist November is All Saints' Day, Hallowmas, a holy day to honour all the saints and martyrs and 2nd November is All Souls' Day, a day to remember all faithful Christians who have died, especially family and friends.  Around the world, many people will visit the graves of their lost loved ones and lay flowers for them.  So today, All Hallows' Eve, Hallowe'en, is a day to prepare to remember, a night when the veil between this life and the next is thin, a day when our superstitious ancestors might wear masks or disguises so that the wandering souls wouldn't recognise them.  During the medieval period in England, children and poor adults would visit houses during this period and offer to say and sing prayers for the souls of the householders and their friends in return for alms, specially baked cakes, apples or money.  This is the root of my 1970s guising.

If Halloween were still remembered in this way, with an understanding of our folklore and heritage, I really wouldn't mind, but it isn't and I don't like what it has become.  Shall I start with Trick or Treat?  Earning one's reward by singing for one's supper, literally or metaphorically, has been replaced with obtaining it by menaces.  Children expect to be given sweets or money in return for absolutely nothing and if you don't give, you may be given a mouthful of abuse or have eggs thrown at your house or car.  As for the costumes, it's all about gore, violence and scaring the bejesus out of people.  What happened to magic and a bit of spookiness?  Little girls and boys go out dressed as bloody vampires and zombies  with their faces painted accordingly.  Nobody seems to raid the dressing up box any more, but supermarkets and shops make a fortune out of selling "costumes" which will only be worn once because the children will have grown out of them by next year - Tom Kitten has two Halloween costumes and he is three weeks old!!

The season of Hallowtide has been replaced by the season of Halloween, with houses being decorated accordingly with tonnes of synthetic tat which will probably end up in landfill, and it's not just houses: I went for a walk in the woods on Wenlock Edge yesterday and there were fake cobwebs pinned up everywhere.  Several people have mentioned to me that they have never known the "season" begin so early before, perhaps because the actual day has fallen outside the half term holiday around here.

As for the lanterns, I wonder if anyone in Scotland still scoops out and carves a swede or if, like the English, they have gone mad for the pumpkin?  America, I get it, I really do, pumpkins are native in your part of the world and let's face it, they are an awful lot easier to carve than swedes, and if I were American I would definitely go for the pumpkin option, but why have the British let go of their tradition so easily?  Vast fields are given over to the growing of pumpkins which will plummet in price if they are still on the shop shelves tomorrow.  Worst of all, as far as I am concerned, is the fact that apparently, most people scoop out the flesh of their pumpkin AND THROW IT IN THE BIN!  I was shocked when I discovered that, quite recently, because in my naivety I had assumed that nobody would waste good food and that pots of pumpkin soup were simmering away merrily on the hobs of the nation.

And so I have come to loathe this day on which the British have given up their traditions and allowed nastiness, commerce and greed to hold sway.

Are you wondering about the photographs?  When I was at primary school there was a television training college nearby and when I was eleven years old, the college approached my school and asked for four children to go there for a day to appear in a film about Scottish Halloween celebrations with an actress called Dorothy Dean.  I was one of the four children who were chosen and my friend Karen and I dressed up as Laurel and Hardy, our party piece being The Trail Of The Lonesome Pine.  We were treated like film stars that day and each received a handsome payment of £5 in House of Fraser vouchers, which I spent on a knitted waistcoat and a pair of gloves.  A short time later, these photographs were delivered to the school, a set for each of us.  I like to think that in some far-flung corner of the world, I was a famous film star for five minutes!

So I cannot wish you "Happy Halloween" as Facebook suggests I do.  Instead, I have gathered together some photographs of those I have loved and lost and they can stay on the mantelpiece for the season of Hallowtide.  I shall light some candles for them tonight and remember their stories.  No pumpkins, no plastic spiders and definitely no fake cobwebs.