Hello, thank you for calling in.  I am feeling a bit sheepish.  I have been hugely distracted by the weather and I have neglected you for longer than I intended.  Sorry.

We knew that the snow was coming in on Friday but we didn't know how much of it there would be: it began to fall early in the morning and by the end of the day there was 15cm.  We didn't have a single flake last winter and it's several years since we saw this much snow, so on Saturday the Best Beloved and I decided to cast our plans aside and make the most of it.  When we opened the bedroom curtains we were greeted by this glorious sight, my beloved hawthorn dressed all in white in front of a blue sky - 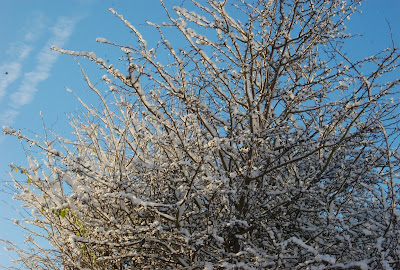 The Best Beloved donned his boots and ventured out into the back garden to assess the situation. 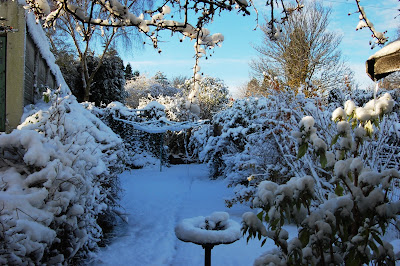 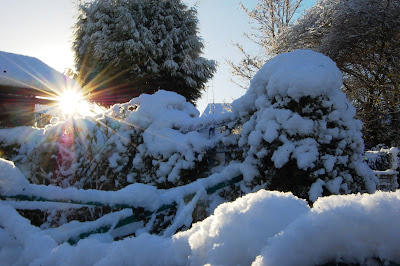 Then we set off for Wenlock Edge in the car.  However, we got as far as the River Severn before discovering that the rest of the road was closed, so we turned the car eastwards and drove along beside the river through a winter wonderland.  The road is lined with trees and their leafless branches looked SO beautiful dressed in white.  We parked the car so that the Best Beloved could get out and take some photographs of the power station, no longer operative and due for demolition next year.  The cooling towers have been part of the landscape of the Gorge for fifty years, extra money having been spent to stain the concrete when they were built in an effort to make them fit more harmoniously, and many people hoped that they would be retained when the rest of the complex is demolished, but it's not to be, the whole lot will be demolished and replaced by new housing. 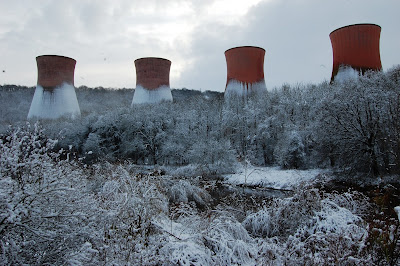 When we reached Ironbridge, we parked the car and went for a little walk. 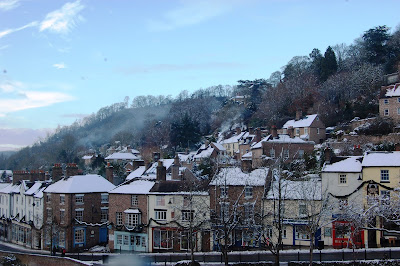 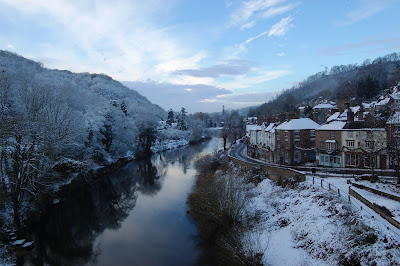 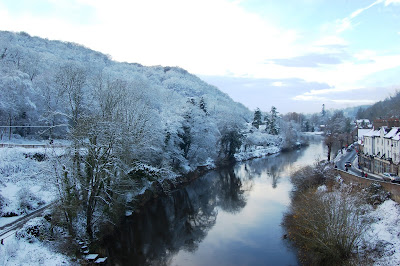 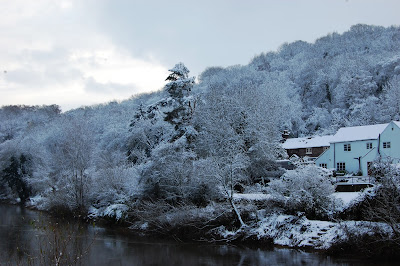 Everywhere I looked, I gasped with delight.  There were a few people around, but not many, and I felt a bit sorry for the shopkeepers who must have been expecting lots of trade on this December Saturday, but I also felt very happy to be in this other-wordly atmosphere, away from the usual hustle and bustle.  It was strange really, the snow made everything feel very Christmassy but the quiet fought against that.  Perhaps it was a proper Advent hush?


The snow began to fall again in the early hours of Sunday morning and continued all day, not stopping until after we had gone to bed.  Many churches and businesses were closed because their staff simply couldn't get to them.   I sat beside the window watching six or seven blackbirds sheltering within the snow-laden holly bush outside, systematically stripping its branches of berries and regularly squabbling noisily.  Knowing that we had plenty of food and fuel and no need to go out anywhere, it felt rather special.  I sent the Best Beloved out into the garden again on Monday morning and he reported back that we had a further 10cm of snow, so 25cm altogether (that's 10" in old money).  Having been brought up on the south coast of England, he said that it's the biggest snowfall he's ever seen.  He was VERY excited.  We are not used to dealing with deep snow in this country and we don't cope with it very well: only the main roads are cleared or gritted so many people find themselves unable to get their cars out of their streets.  Consequently, a rather celebratory atmosphere descends and the air is full of laughter as schools are closed and parents take their children out to build snowmen, throw snowballs and generally make the most of the white stuff. We did this, too: we drove to The Teacher's house (very slowly) so that the Best Beloved could take her out to play on the sledge his father bought for him and his siblings when he was a child, but not before she ensured that Tom Kitten was the fourth generation of his family to enjoy a ride. 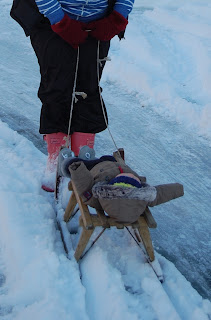 There's something else I'd like to share with you: three hospitals in this county put out a general call for owners of 4x4 vehicles to help with transporting staff to and from the hospitals so that services could be maintained and it seems that people rose to the call magnificently, asking that their passengers made donations to the hospitals or to the local air ambulance in return.  One driver reported that he had four hours sleep in two days, he was so busy.  Staff, too, stayed beyond the ends of their shifts to ensure that wards and clinics wouldn't have to close.  Now that amount of goodwill is, it seems to me, very Christmassy.