Finding the Unexpected in Brithdir

Hello.  Thank you for dropping in, and if you've been dropping in for a while, looking to see if I have written a new post, thank you for your patience; you've been waiting for far longer than I intended.
Sometimes a blog post takes me in an unexpected direction and I end up in a different place from my intended destination.
"It says that it's on the B4416 at Brithdir," I said to the Best Beloved as we drove through the village, just outside Dogellau in the Snowdonia National Park, "There's Ty Glas Farm B&B so it's somewhere here on the left; if we get to the school, we've gone too far."  The Best Beloved spotted the noticeboard on the roadside and parked the car.  We had arrived at St Mark's Church, "one of the most remarkable Arts and Crafts churches in Britain" according to Simon Jenkins in his book Wales: Churches, Houses, Castles.  A rusting sign on the heavy gate announced that the rhododendrons in the churchyard, which had been collected by the botanist Mary Richards, were being pruned as part of a management scheme which would take several years.  I had never heard of Mary Richards - remember her name, I shall come back to her later - but I could see the rhododendron bushes, so many of them that I could barely see the church.  If I had driven past in June when the rhododendrons are in flower, they would have shown me where the church is.
I pushed open the gate and found myself at the foot of a small flight of steps.  I love a flight of steps, they hold so much promise, enticing me up to whatever lies at the top.  This one looked as if it was not trodden very often and the abundance of moss, together with the rust on the aforementioned sign, which was only nine years old, told me that this churchyard receives more than its fair share of rain. 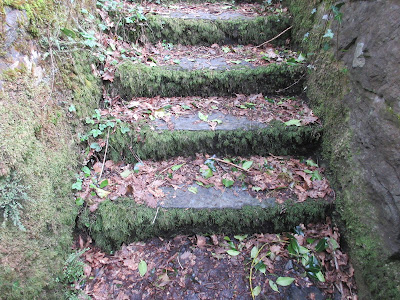 Once at the top of the steps I could see the church peeping through the overgrown trees and shrubs. 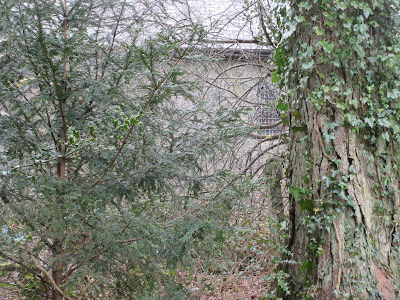 Once up close, I found the stonework fascinating, the rain having persuaded the minerals to reveal their true colours in shades of red and green.  The architect apparently wanted the stone, which was quarried locally, to be left rough and undressed, as if the building had risen up out of the earth, but the builder couldn't bear to do it and made it smooth.  The north door was locked so we walked around the building to the south porch and realised that we had found the main entrance, with a carriage drive leading to it.  I turned the handle, gave the door a good shove, walked in and gasped.  This is why - 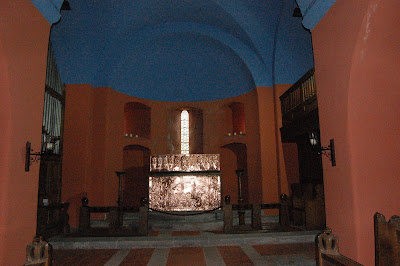 This is not what I expected to see in a remote Welsh village.  I certainly didn't expect to see an apse at the east end, because I had walked around that end of the building and there were definitely corners on the outside!  Would you like to see the view from the false apse, looking towards the west end? - 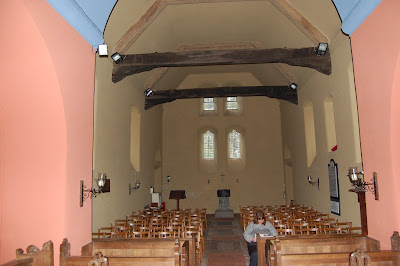 The striking colour scheme is the original one - in fact, the reason for the church's Grade 1 listing is that it is "A highly important and unaltered example of the work of Henry Wilson, a leading figure of the Arts and Crafts movement."  When Rev Charles Tooth died in 1894 his widow, Louisa, had this church at Brithdir built in his memory.  Charles was the founder of St Mark's English Church in Florence and Louisa wanted his memorial to reflect that Italian experience in its style.  She commissioned Henry Wilson, a London-based architect, designer and craftsman who was a member of the newly-established Art Workers' Guild, to build and furnish the church and work began in 1895.  Louisa took a keen interest in the work and over the three years it took to complete the church she wrote more than seventy letters to Henry.
So, would you like a little tour?  I'll begin with that altar: it was cast in copper by Henry and shows an Annunciation scene.  Mary is on the left, there's a child angel in the middle and on the right are two adults, one being Rev Charles Tooth himself and the other his guardian angel.  The reredos, that copper screen behind the altar, was also cast by Henry.  I've never seen anything like it before. 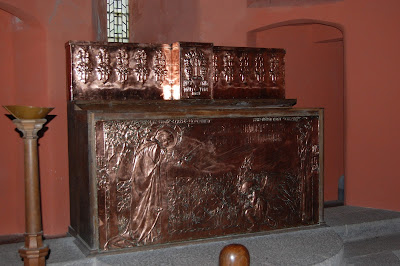 The pulpit, also designed by Henry, is made of beaten copper. 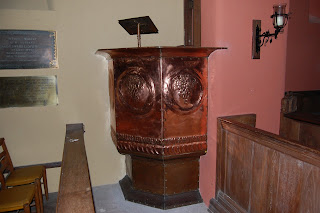 The choir stalls, made of Spanish chestnut, were designed by Henry but carved by Arthur Grove and there are beautiful animals on them.  I was very taken by the tortoise. 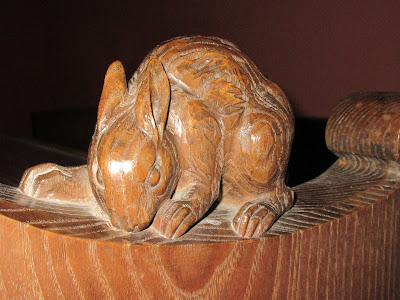 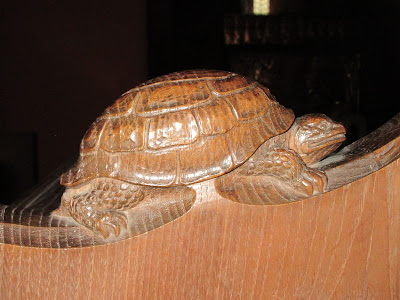 The font is the only lead font in Wales and was designed by Henry, modelled by Arthur and then actually cast at the Central School of Art and Design in London, where Henry was teaching from 1896. 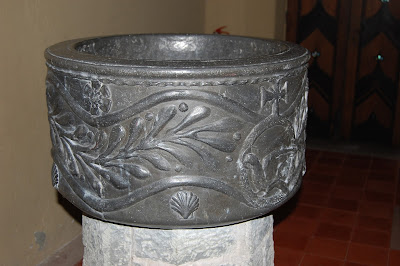 The doors are made of oak and teak and inlaid with ebony and mother-of-pearl. 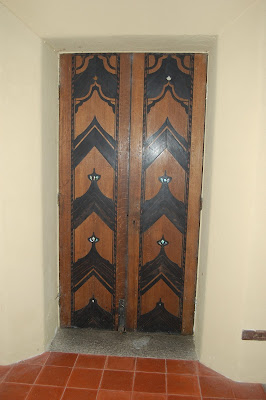 There is no stained glass in the windows but they are intricately leaded, the one above the altar revealing a small heart.  I was taken by that, too, and I wondered about Henry's intention: was it to reflect God's love for his people, or Louisa's love for Charles, or both, or something else? 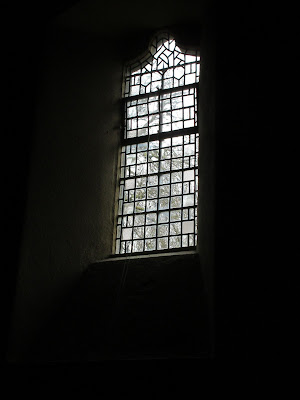 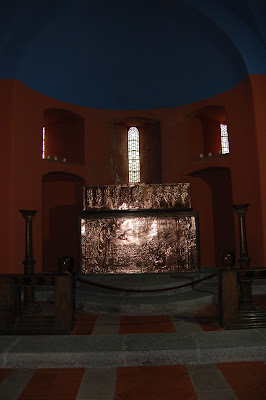 So there you are, one man's vision, from building to furnishings to colour scheme.  Henry actually wrote that "the chief merit of Brithdir is that it is personal... what is done at Brithdir must live, because it has come out of my own life."  St Mark's is now redundant and was adopted by the Friends of Friendless Churches in 2005, only 107 years after it was consecrated.  The church is open all the time for those who want to visit but the visitors' book confirmed that those steps were telling the truth, they were not trodden often.


That evening, the Best Beloved and I were chatting with a local couple in a restaurant in Dolgellau (pronounced Doll-geth-lie).  They told us that the church belonged to Caerynwch and that they went to a carol service there a couple of Christmases ago.  I doubted this but they were quite sure, saying that "Andrew and Hilary" had recently sold the big house but may have retained the land, so when we got home, I started delving into the internet.  I should say that my first triumph was finding out how to spell Caerynwch, which they had pronounced "Carnook"!  I discovered that Louisa was a widow when she married Charles Tooth, her first husband having been Richard Meredydd Richards, owner of...the Caerynwch estate!  Louisa inherited both land and money from her father when he died and from her first husband, so she was a wealthy woman when she commissioned Henry Wilson to build St Mark's and gave the land to the Church.  Andrew Richards, the current owner of the Caerynwch estate, is Louisa's great-grandson, and he did indeed sell the house, although not the surrounding estate, three years ago - I found this link if you'd like to have a look (it's quite grand).  And do you remember Mary Richards, the botanist?  She was Louisa's daughter-in-law, Andrew's grandmother, awarded the MBE for services to botany in 1969.  She brought those rhododendrons back from China in the early years of the twentieth century.
I began with a visit to an Arts and Crafts church and ended up researching the history of the local estate.  I enjoyed the visit, and the journey.
See you soon.
Love, Mrs Tiggywinkle x
Posted by Mrs Tiggywinkle at April 17, 2018