Hello, thank you for being here.  I am glad to see you.  The sun has been shining and we seem to have leapt from winter straight to summer, bypassing spring completely!  Such are the vagaries of the British climate and I'm not complaining about it, I'm really not, I'm well aware that we wouldn't have such a green and pleasant land without it.  Also, we wouldn't have so much to talk about.
Do you remember that in 2014 a work of art entitled Blood Swept Lands and Seas of Red caught the public imagination when it was installed at the Tower of London to commemorate the centenary of the outbreak of the First World War?  The work, by artist Paul Cummins and designer Tom Piper, comprised 888,246 ceramic red poppies, one for each British or Colonial serviceman killed during the war, and was made up of three segments: Weeping Window, a cascade which seemed to pour down from a window in the tower, Wave, an arch around the Tower entrance, and the sea of poppies which filled the moat.  More than five million people went to see the installation and so it was agreed that Weeping Window and Wave should be bought for the nation while the rest of the poppies were sold off to raise money for six service charities.
Weeping Window and Wave have been touring the country since 2015 and in March Weeping Window, comprising 5,500 poppies, was installed at Hereford Cathedral.  I planned to go and see it during the Easter holiday, but the weather was so poor that I kept putting it off, waiting for a brighter day which never came, and in the end the Best Beloved and I didn't get there until 29th April, its final day in Hereford.  The day was dry, which was a relief as some of my friends had seen it two days before in the pouring rain, but overcast and bitterly cold.  We walked through the gates and were greeted by this sight. 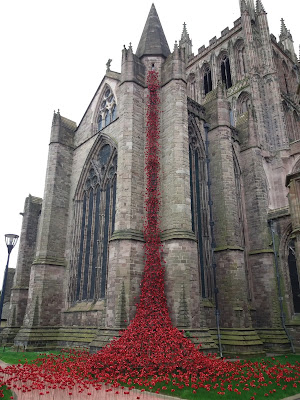 I found it almost overwhelming.  There was quite a crowd of people there, some perhaps passing through the Cathedral grounds on their way to somewhere else, some obviously walking their dogs, there were children running and laughing as they played beneath the trees, oblivious to the significance of the huge cascade in front of them.  It felt almost like an ordinary Sunday morning, except that it wasn't ordinary at all because we were there remembering the horrors of the First World War, obviously.  I had woken up that morning convinced that I needed to read some poetry while I was there, and so I did, aloud.  Please don't misunderstand me, this was a personal commemoration, not a public one so I didn't "declaim", I simply stood and read aloud in my ordinary conversational voice, and then I played The Last Post on my smartphone - that was an impulse, but I think it was a good one.  I read Dulce et Decorum Est by Wilfred Owen, The Death of Harry Patch by Sir Andrew Motion and Blood Swept Lands and Seas of Red, the poem by an unknown soldier which Paul Cummins found while doing his preparatory research.  I am sure that the people who were close to me and heard me thought that I was bonkers but I can live with that; I paid my respects.


If you would like to see the poppies, Weeping Window will be at Carlisle Castle later this month and then Middleport Pottery in Stoke-on-Trent before arriving at its permanent home in the Imperial War Museum, London in October.  Wave is currently at the Royal Armouries in Fort Nelson in Portsmouth and later this year will move to the Imperial War Museum, North in Manchester, which will be its permanent home.  You can find out the details here.  The installations are free to view and I think you have already guessed that I recommend them.
Just as we were about to leave, the sun came out for a few moments and I instructed asked the Best Beloved to whip out his camera and take some more photos.  He did. 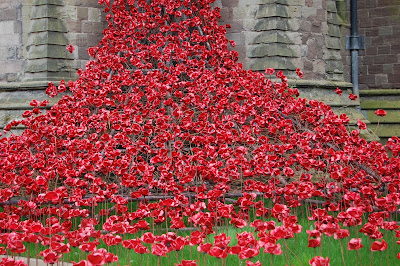 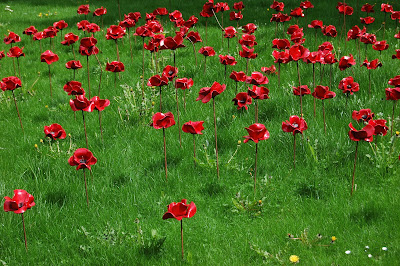 Many people were taking selfies featuring the poppies behind them and I asked the Best Beloved if we should ask someone to take our photo with the installation as we are absolutely hopeless at selfies.  He was adamant that we should not; he thought it was disrespectful.  I love him for that.
See you soon.
Love, Mrs Tiggywinkle x
﻿
Posted by Mrs Tiggywinkle at May 09, 2018