Hello, thank you for calling in, it's good to see you here.  After the half term holiday we are now firmly back in the termtime routine with noses to the grindstone for the most difficult seven weeks of the year.  Wish me luck/patience!  Half term began with a perilous drive through Wales in floods and fog, an adventure which I shall share with you next time, we cancelled our proposed camping trip because of the weather and at the end of the week we droved south to Portsmouth to visit the Best Beloved's family and there we found the sunshine.
Travelling on the Friday at the end of half term week we expected the roads to be busy and the journey long so the Best Beloved suggested that we stop somewhere on the way.  "We can stop at Chawton if you like," he said.  He knows how to make me happy!  Mind you, it took him a long time to learn: we drove past Chawton and the brown tourist sign pointing the way to Jane Austen's House several times a year for twenty-two years before we actually visited!  It's a lovely place for fans of Miss Austen's books and I would dearly like to visit again, but I would want to spend a couple of hours there and we didn't have that long to spare.  However, there was somewhere else in Chawton I was keen to see.
Edward Austen, Jane's elder brother, inherited Chawton House and its estate from a distant cousin of their father, Thomas Knight (and was required to change his legal name to Knight!), and in 1809 suggested that his widowed mother and sisters Cassandra and Jane move into the former bailiff's house on the estate.  If you are familiar with Sense and Sensibility, you will recognise this scenario.  The women often visited their relatives in the big house, which is only five minutes' walk away, and if they walked down the drive, they would have passed St Nicholas' Church, where they attended services every Sunday.  And so we broke our journey in Chawton and I walked in Jane's footsteps down the drive to the church. There was a fire here in 1871 and the church was almost entirely destroyed but the chancel and sanctuary are the parts of the building known by Jane, and some of the memorials on the walls of the nave were rescued from the fire and mounted on the rebuilt walls. 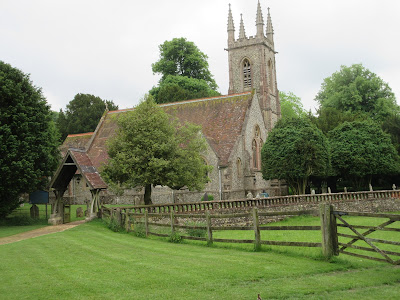 My current read is Sanditon by Jane Austen and Another Lady, so you can understand why I was in the mood for a visit to Chawton.  Jane completed eleven chapters and-a-bit-more of this novel before she died and this version was continued and completed in 1975 anonymously by Marie Dobbs - the four of Jane's novels which were published during her lifetime were done so anonymously, simply stating that they were "By a Lady".  I'm not familiar with Regency Anglican practices but in the hope that Jane would have walked up the aisle and knelt at the rail to receive communion, I walked up the aisle and placed my book there.  I had a little moment and the Best Beloved indulged me. 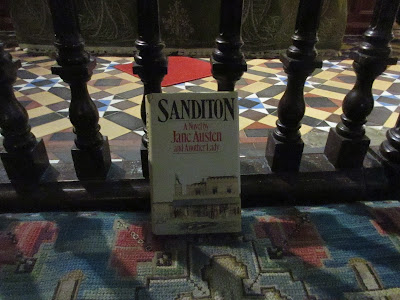 Cassandra and Mrs Austen, who was also called Cassandra, were buried in the churchyard, outside the sanctuary, and there are memorial plaques to them and to many other members of the Austen/Knight family inside the church. 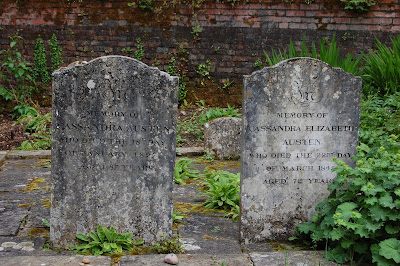 So having paid my respects, we left Chawton and continued the drive through Hampshire to Portsmouth and the coast.  That evening I spent a very pleasant couple of hours at the Spice Island Inn in very good company watching the ships come in and out of the harbour with a gin and tonic in my hand.  On our way home, the Best Beloved drove up to the top of Portsdown Hill because he thought that we could watch the sunset together.  Honestly, I don't know what's come over him, Chawton and now this, and he'd even looked up the time the sun would set!!!!!!!  Unfortunately the cloud was too low and there was no sunset to be seen, but I love that he tried. 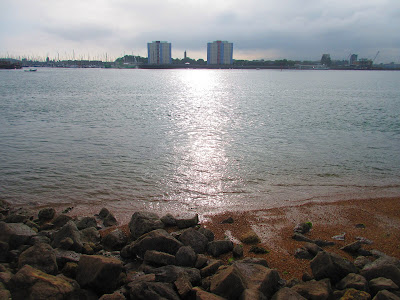 The following day was absolutely glorious and we spent all afternoon on the beach at Southsea.  I have been visiting there for thirty-one years and I honestly think that was the first time I have ever done that.  Tom Kitten, now eight months old, liked the stones very much and was upset when we wouldn't let him put them in his mouth!  This was his first visit to the seaside and we were all glad to be there with him as he dangled his toes in the sea for the first time. 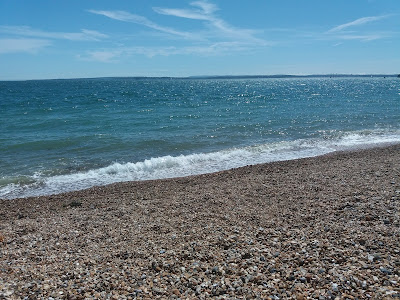 Before heading home on Sunday, the Best Beloved and I visited Fort Nelson on Portsdown Hill. You might remember that we visited Weeping Window at Hereford Cathedral in April, the art installation by Paul Cummins and Tom Piper which formed part of Blood Swept Lands and Seas of Red at the Tower of London in 2014; I shared it with you here.  I had forgotten that the companion piece, Wave, is at Fort Nelson until 24th June until my sister-in-law reminded me and as it's free to visit (although £3 to park a car) we went to see it.
There were hundreds of people there, which pleased me.  Most of them joined a long queue to reach a viewpoint and had their photographs taken there with Wave sweeping up and curling over behind them, but we didn't do that.  I do hope that all the parents who were photographing their smiling children explained to them the meaning of the work.  To me, it looks like a wave of men going "over the top", climbing up out of the trenches and onto the battlefield.  As I had done at Hereford, I stood in front of the work and quietly read aloud the poem Blood Swept Lands and Seas of Red by an unknown soldier and played The Last Post on my 'phone.  I had another little moment. 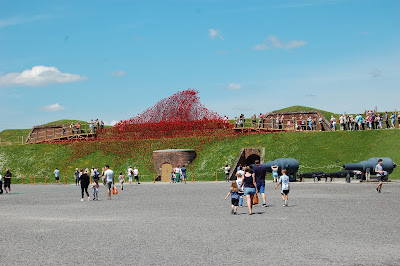 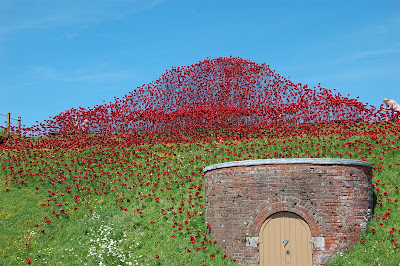 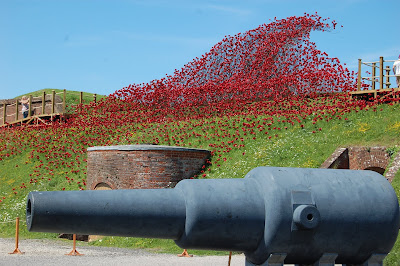 I had another little moment last week: The Mathematician sat her final university exam and feels confident that no resits will need to be done.  I realised that I have been supporting somebody in this house through university for the last twenty-one years, off and on.  What on earth am I going to do with myself now?!
See you soon.
Love, Mrs Tiggywinkle x
﻿
﻿
Posted by Mrs Tiggywinkle at June 12, 2018