Feeling Like An Ordinary 12th Century Person at Heath Chapel

Hello lovely readers, thank you for calling in here, I'm always pleased to know that you've been.  Before the business of the forthcoming season becomes overwhelming, and please note how I am fending it off by avoiding using the C word, I need to finish off telling you about my summer adventures (which also serves to deflect my attention from the forthcoming festivities).

When we went off in search of St Milburga in August we took a little detour to find another place which I have wanted to visit for years: it is Heath Chapel, built in about 1140 as a dependent chapelry of the parish church at Stoke St Milborough, and only just over two miles away.  So it really shouldn't have taken us almost an hour to find it!  I consulted the atlas and we headed off in the right direction.  "It stands by itself in a field," I said, "So we'll see it."  We drove around failing to see it for quite a while before eventually getting out the satnav and plugging in the postcode, which took us along roads which were too small to even be on the map - if you'd like to go, it's SY7 9DS.  There was an incident with half a dozen excited sheep who really shouldn't have been on the road and galloped along in front of us before they found an open gateway and veered off.  At last we saw a sign for Heath and, having driven past a very few large houses, I shouted, "Stop!" and we did, abruptly.  I had caught sight of the chapel through a gate between two tall hedges.  The noticeboard just inside the gate directed us to turn into the lane we had just passed and park the car beside another gate; it also informed us that although the church door was locked, the key was hanging on the back of said noticeboard -  again, I am giving you all of this in case you'd like to visit yourself because you don't want to waste the best part of an hour driving around the lanes like we did, even though the countryside is rather lovely, in a hilly, farmy sort of way. 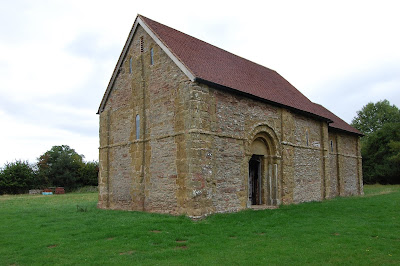 The chapel is very small and very simple.  In typical Norman style, it is just a squarish chancel with a longer, slightly wider nave - no porch, no transept, no tower, no gallery, no stained glass.  Nikolaus Pevsner described it as the "perfect example" of a small Norman church, but that's not quite right because one of the windows in the north wall was altered in the seventeenth century, presumably to give more light to the pulpit. 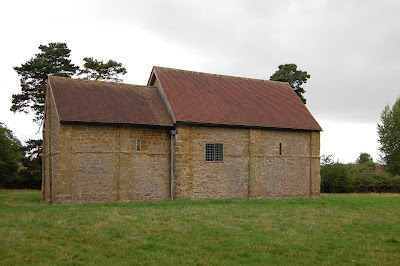 In 2013 when the National Churches Trust asked sixty well-known people to choose their favourite church in the UK, the historian Dr Kate Williams chose Heath Chapel, saying that "going inside is the closest you will ever feel to an ordinary 12th century Shropshire person going to worship. These traces of ordinary life are very rare from so far back – which is why it must be treasured."  The classicist Dame Mary Beard, who grew up nearby, also chose it, describing it as a "wonderful reminder of just how moving the plainest architecture can be."  So, would you like to see what the fuss is all about?

The most decorative feature of this chapel is the doorway, typically arched with a plain tympanum and chevron mouldings. I imagined the skilled hands of the mason carving the stone almost nine hundred years ago.  The ironwork may be original, too. 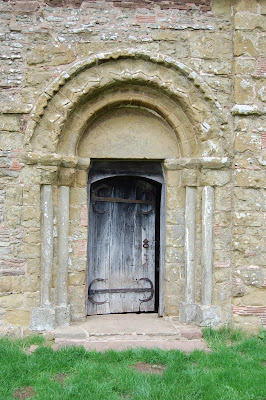 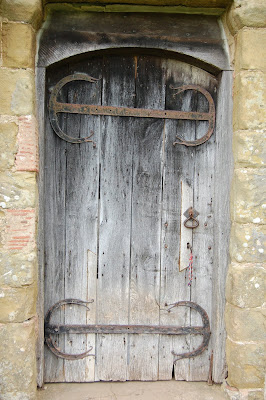 The key did not work easily and I had to wiggle it about a bit, but not for long before I was able to push open the door and step inside.  This is what I saw. - 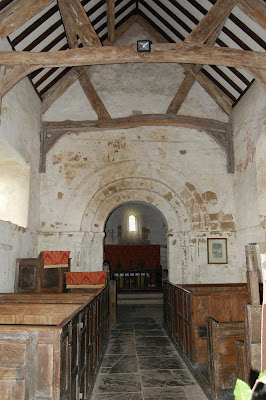 Do you see the scraps of Medieval painting above that typical Norman arch?  They were whitewashed over after the Reformation and only uncovered just over one hundred years ago.  Apparently, this is The Last Judgement, but I couldn't tell! This one, on the south wall, is St George.  Obviously! 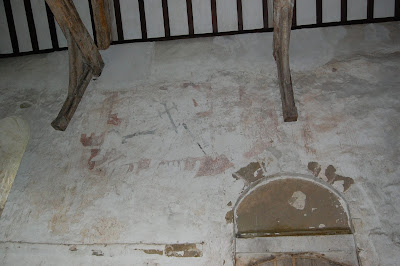 The change in Anglican worshipping styles in the seventeenth century meant that the chapel acquired new interior fittings: the pulpit, the altar rail and the seating all date from that time, including the GINORMOUS box pew in the chancel, which I could only just get far enough away from to photograph!  It's like an enormous sleigh, with a bench on the back for the driver. 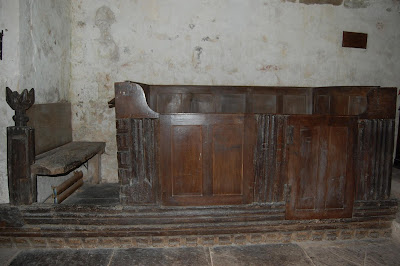 The font is also huge, as was the Norman style.  I think the baptism of babies at that time involved dunking them right in the water, rather than the more restrained sprinkling which tends to be favoured nowadays. 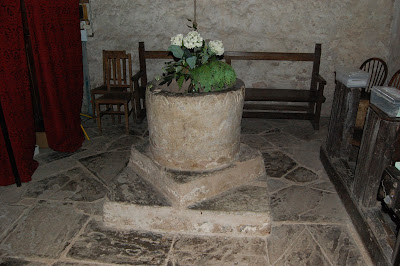 Do you see those plastic boxes placed rather incongruously on the side and ruining my photo?  Those boxes led me to believe that this church is still in use.  It is certainly cared for and cared about - there were glass jars of greenery on the altar, sitting on top of a plastic cover which has presumably been placed there to protect it from the whatnots which might fall off the ceiling in such an ancient building.  After I got home a bit of internet hunting revealed that a family service is held in the chapel every month.  That made me feel happy, that the building is still needed to do its proper job. 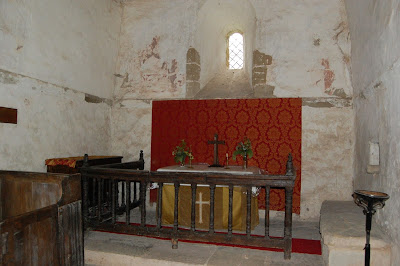 Also, I don't know if you spotted this in the exterior photographs but the chapel has obviously had a spanking new roof, I think within the last five years, replacing the last new roof of 1912. 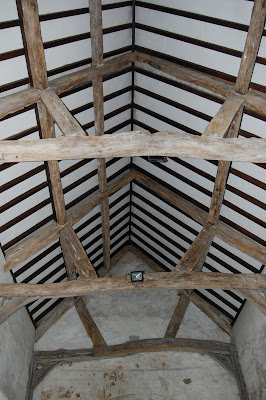 We had the place to ourselves while we were there.  A look through the visitors' book revealed that Heath Chapel is obviously very dear to a good number of people, some of whom visit repeatedly and I can entirely understand why because the atmosphere is very, very special.  I could have stayed for much longer.  I have written before about thin places, places where the boundary between this world and another feels very thin, and Heath Chapel is such a place.  The atmosphere there was amazing. Perhaps I was feeling the presence of all those ordinary twelfth century Shropshire people who Dr Kate Williams was referring to.  Yes, the paint is peeling, the place is very dusty, the (nineteenth century) flagstones could do with a mopping and the woodwork is crying out to be fed BUT I agree with Dame Mary Beard, it is a very moving place.  "Wow!"  I kept saying over and over again, "Just Wow!"  The Best Beloved thought I was a bit bonkers, but he's thought that for a long time and I keep telling him that that's why he loves me!

So, if you do get the chance to visit Heath Chapel, I highly recommend you make the most of it.   It is a very special place.