Two Holy Wells, a Flat-Pack Church and Salad with Gravy

Hello, thank you for dropping in here, where today you will find a little haven away from the relentless reminders that C******** is coming.  It's November, the sun is shining and I am going to share with you a day out on an equally sunny day in September, the funniest day I have had for a long time.

You might remember that in the summer I visited St Winefride's Well in Holywell with two friends.  I wrote about our visit here and you might want to clink on the link to read St Winefride's story, but the short version is that she lived in the seventh century and when she died, she was buried in the grounds of the convent at Gwytherin where she was abbess.  Five hundred years later a monk from Shrewsbury Abbey made a pilgrimage to her holy well and, having been healed by the water, decided that her bones should be exhumed and transported to Shrewsbury Abbey so that they could be properly venerated.  (This also worked out well for the Abbey, which became an extremely popular pilgrimage site, in England second only to the shrine of St Thomas a Becket in Canterbury).  If you are familiar with Ellis Peters' stories about Brother Cadfael, the first novel, A Morbid Taste For Bones, is based on this venture.  So, in 1138 poor St Winefride was dug up from her peaceful resting place and carried to Shrewsbury.  The journey was too far to complete in one day so overnight the party rested at Woolston in Shropshire and where her bones were laid - guess what?  A spring of holy water appeared!  This well, too, became famous for its healing powers and sometimes, stones were found in it which were stained with red spots resembling bloodstains, exactly like stones found in the well at Holywell - St Winefride's blood.  (Actually, its a type of algae, but why spoil a good story?!)  So, my friends and I decided that, having been to Holywell, we should also visit St Winefride's Well in Shropshire.

This time there were four of us as one friend's husband came too.  I was in charge of directions.  "Tight and considerate parking for at the most 2 cars, in a lane just off the main through road at Woolston, then follow the path to the right for a couple of minutes, and the well housing becomes apparent" I read out to the driver.  We found the lane easily and parked tightly and considerately on a grass verge on the left in which large tyre marks were visible.  In front of us was a large metal gate, possibly a farm gate, from behind which a scowling man watched us, so the driver left plenty of space for large vehicles to get around our car if necessary.  We got out of the car (I didn't, I cowered on the back seat) and the scowling man began to berate us rather aggressively, saying that his vehicles wouldn't be able to get through, accusing us of parking on his lawn and saying that we should park near the well if we were visiting it.  We were parked near the well!  My friend's husband asked him to be civil and said that he hadn't seen tractor marks in a lawn before and the driver reparked the car on the right of the lane, tightly and considerately.  Phew!

So we walked down the path which was edged with ripe, luscious blackberries glowing in the sunshine, and speckled wood butterflies danced before us, leading the way.  After a few minutes we saw the well house, which is now owned by the Landmark Trust and can be rented out for holidays - here is the link.  It looks like a beautiful, secluded, peaceful place for two but be aware that the bathroom is in a separate building on the other side of the path!  This building was probably built in the 16th century to replace an earlier chapel and was used as a courthouse before it became a cottage.  Behind the well house, the water flows into a series of stone basins which were used by local people for public bathing - but only until 1755, when they were closed because of "riotous" behaviour!  The mind boggles. 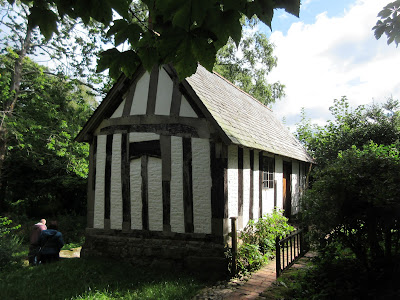 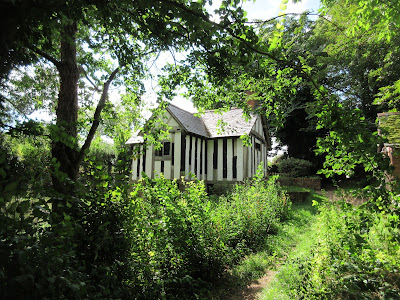 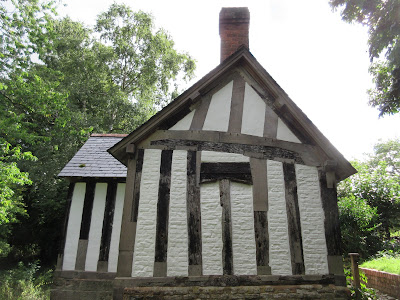 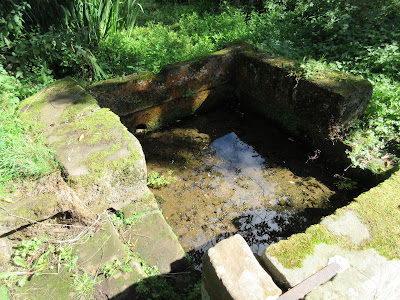 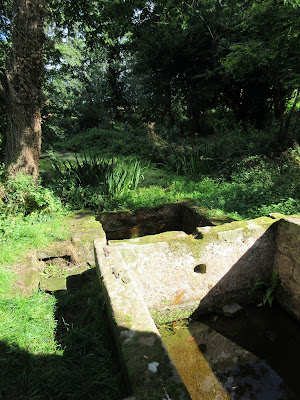 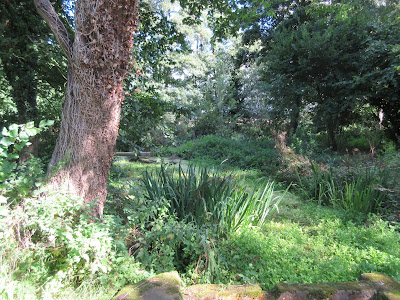 Now, gentle reader, I was a bit cross because the pool into which the waters flow has been completely claimed by plants and weed.  I would like the Landmark Trust to clear some of it to release the magic of the water.  I should also tell you that while I found the place to be a beautiful spot, I did not feel its supposed holiness at all.  There was no magic, no spirit of St Winefride, although I was touched when I saw that an earlier visitor had left a little posy of flowers for her.  I mentioned this aloud and it sparked off a goodnatured discussion about "thin places", places where the barrier between this world and another is fragile; my friend's husband said that there is no such thing, it is not that God is in some places and not others because God is everywhere, instead it is we who put barriers in place so that we can't sense God's presence and lower them in some places so that we can.  Hmm. 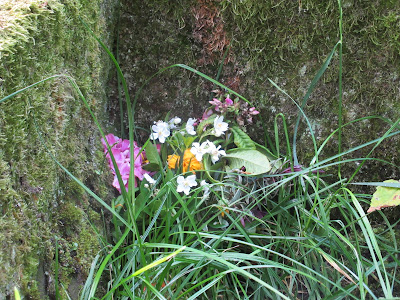 So we ambled back along the path to the car and drove for a few minutes to Maesbury, where a sign proclaimed that the Church of  St John the Baptist was open.  We couldn't resist it. 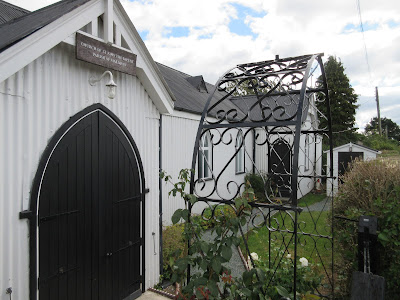 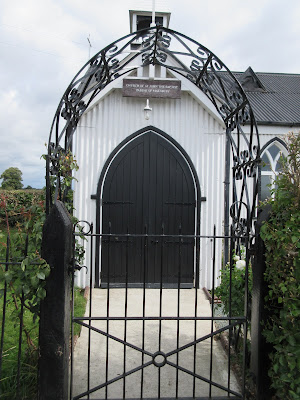 This church must be the best flat-pack thing I have ever seen.  It was purchased from Harrods in London in 1906 for the grand sum of £120 and transported up to Shropshire where two local men erected it.  The interior wooden cladding is original and the pews were made by carpenters from a local college in the 1950s and 1960s. 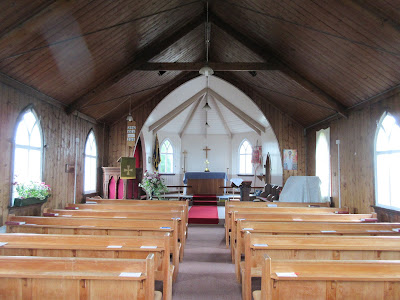 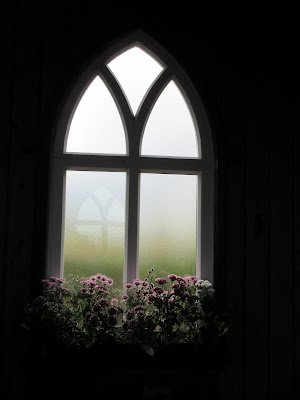 We got back into the car and drove past a sign for a canalside tearoom to Oswestry in the hope of finding something to eat.  These road trips usually include a refuelling stop somewhere with cake, china plates and pots of tea.  We parked the car and walked to a likely-looking tearoom only to discover that it was closed.  By this time we were quite hungry, some of us having foregone breakfast to make room for cake, and as there was a pub a few doors down, The Oswestrian, we decided to go there.  The pub was busy, which I took to be a good sign, and everyone seemed to be eating hot food, so we decided to follow suit.  Two of us chose "jacket potatoes with tasty sausages and fried onions" and salad while our friends made more sensible choices.  When will I ever learn?!  When our plates arrived, two or three thin sausages were nestled inside the potato which was then covered in thick onion gravy.  This was not what we were expecting.  We quickly ate up our salad first before the gravy seeped across the plate to meet it, but I was too slow.  I can confirm that salad with gravy really isn't very nice and coleslaw with gravy is absolutely revolting.  Eventually, somebody who had chosen something sensible to eat said, "I don't hear anybody saying, "Mmmm, these sausages are tasty!""  He was right.  We were not saying that.  I don't think I shall be dining at The Oswestrian again, but it did make us laugh a lot and gave us a story to dine out on.

Oswestry is named after St Oswald, the Christian King of Northumbria who fought the pagan King Penda of Mercia at the Battle of Maserfield in 641 or 642 AD.  Oswald was killed in the battle and his body dismembered.  Legend has it that a large bird, possibly a raven or even an eagle, swooped down, picked up one of his arms and flew off with it.  Where the bird dropped the arm, guess what?  A spring of holy water appeared!  We couldn't resist it so after lunch we set of to find St Oswald's Well. 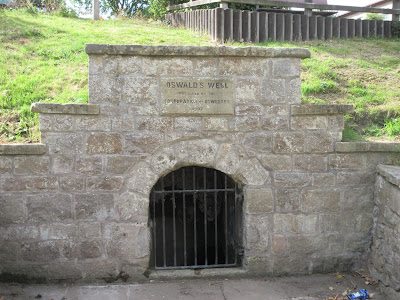 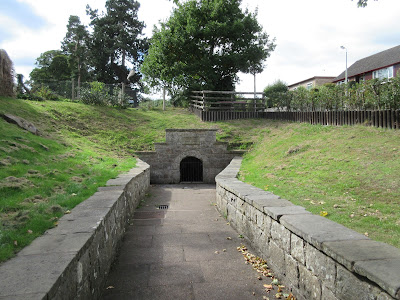 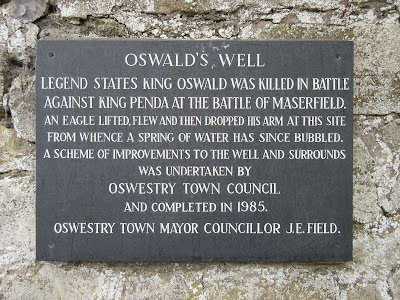 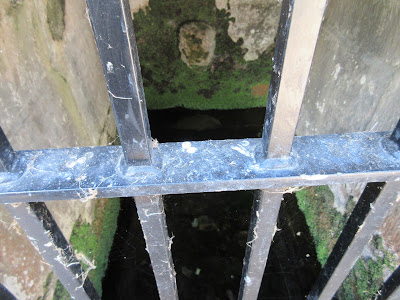 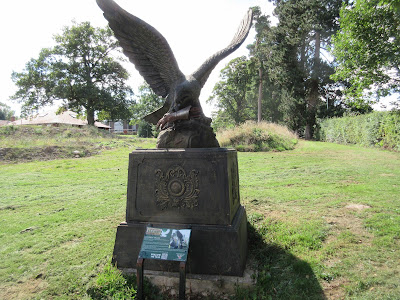 Again, I was a bit disappointed.  I think Oswestry should be making more of a hoo-hah about it.  Instead, it sits quite forlornly in a residential area which was not easy to find.  There was litter both around and floating in it and it felt uncared for, as if nobody expected anyone to actually visit it deliberately, and certainly not like a place of pilgrimage.  There is a rather grand statue of an eagle above it, in the park, separated from the well by a chainlink fence.  I felt a bit sad for St Oswald, who founded the monastery at Lindisfarne, where he is much better remembered.

So that was our first day out as a foursome.  My friend's husband had been keen to join us on one of our road trips but I'm not sure this gave the best impression of what we usually do.  The "holy wells" were a bit disappointing (to say the least) and THERE WAS NO CAKE, but we laughed all day.  We even laughed when we talked about the belligerent farmer who made us move the car.  I can't really tell you why.  Now that I have written it down it doesn't seem very funny at all, so I am sorry if you are disappointed.  I suppose it shows that it doesn't really matter where you go or what you do, the thing which makes the difference is the company.