Once upon a time in England there was an unpleasant vicar who didn't really like his congregation and spent as little time with them as possible.  He particularly avoided the families with children who attended his church, leaving all family activities to be organised and led by a small team of lay church members.  Working in a hostile environment brought this team of people close together as they supported and cared about each other, and this support and care was reflected in the work they did for the church so that families wanted to be with them and to share in the activities they organised - Messy Church, film nights, holiday breakfasts, playing in the snow.  All of these thrived with generosity at their heart while attendance at the church's traditional services dwindled.

One year the unpleasant vicar decided that he didn't want to be involved with the church's usual Crib Service on Christmas Eve so in the autumn he asked the Team Leader if she would organise and lead it instead.  She agreed on the basis that it could be a service based around the values of Messy Church: it must be Christ-centred (that bit would be easy), for people of all ages and include creativity, celebration and hospitality.  The unpleasant vicar agreed and so the Team Leader contacted the rest of the team and invited them to be involved.  Everybody agreed.  She and her Right Hand Woman had a meeting (in a café, with Earl Grey tea and cake, so it was a very productive meeting) and drew up a plan.  They both felt VERY excited about it.  They went away from the meeting and sent e-mails and made 'phone calls.  They began to publicise the Crib Service and sent out invitations to all the families who attended the activities they usually held at the church.  A young child began to practise reading a passage from the bible, as did a woman who hadn't felt able to come to church for a long time, delicious baking smells wafted across the parish from the Chief Baker's kitchen and straw bales were sourced.


The excitement grew.  There was a definite amount of chatter about the forthcoming service.  On the Sunday before Christmas, during the afternoon, three bales of straw were installed in the church's chancel, ready for a weary Mary and Joseph.  (Have you ever moved bales of straw?  What a trail of mess was left!  The vacuum cleaner had to be whipped out straight away.)

On 21st December, three days before Christmas Eve, one of the church wardens telephoned the Team Leader during the evening and told her that the wardens had met together and decided that they did not want her to lead the Crib Service but instead, the unpleasant vicar was going to prepare and lead an alternative Crib Service.  As the meeting had taken place at the vicarage, the Team Leader assumed that the decision had actually been made by the unpleasant vicar and that the wardens were simply rubber-stamping it.  The Team Leader felt devastated and she immediately rang her Right Hand Woman, sobbing down the 'phone as she explained what had happened.  The Right Hand Woman had difficulty understanding her and was initially confused but once she had established what had happened, she sobbed, too.  She felt as if she had been given a wonderful gift which had then been spitefully snatched away from her.  Please remember that invitations had been sent out, people had been practising their readings, baking had been done and three bales of straw were already sitting in the church in preparation...and now the service was not going to happen.

What to do?  Was there, in fact, anything to do?  The following day, 22nd December, two days before Christmas Eve, the Right Hand Woman awoke after very little sleep, remembered what had happened and burst into tears again.  She thought about holding the service in her garden but the space wasn't really suitable and the access was difficult.  The Team Leader thought about all the people she would have to contact to let them know what to do.  But what were they to do?  She talked to her Wise Friend about it and an amazing thing happened: the Wise Friend suggested that the service go ahead as planned IN HER GARDEN where there was a breeze house which would make the perfect stable.  Could they do it?  Yes, they could.  The Team Leader and the Right Hand Woman spent the day contacting the families they had invited and removing the bales of straw from the church (and vacuuming the carpet afterwards).  The Wise Friend asked her neighbour, an organist, if he would bring his portable keyboard into her conservatory and play for the relocated Crib Service, and he agreed.  She went out and bought metres and metres of fairy lights, invited her neighbours to the service and found lots of chairs.

On Christmas Eve the fairy lights were strung up around the garden, the straw bales were installed and an old crib became a manger.  It looked absolutely enchanting when night fell.  The Right Hand Woman, wearing tinsel on her head and carrying a lantern, assumed the role of innkeeper and stood outside the house to direct people where to park and welcome them, apologising that there was no room inside the inn but ushering them into the back garden where they gasped at the fairy lit enchantment as the Chief Baker offered them cakes and other treats.  Forty-two people came that night, well wrapped up against the cold, the youngest aged nine months and the oldest more than seventy;  there was even a little dog.  Some of them were neighbours who wouldn't have come to a service in a church.  When the Team Leader asked who would like to be Mary, a seven year-old boy shouted, "Me!" and ran forward to sit on the straw.  Then a five year-old girl called out, "Can I be Joseph?" and of course she could.  Then, as the familiar story unfolded, a shepherd was needed and a small boy raced into the "stable", then an angel, and the Right Hand Woman stepped forward because she thought that the children needed to be supervised, and after all, she was wearing tinsel on her head so she had the right costume, but really because she had always wanted to be in a nativity play.  Encouraged by this, other adults and children then volunteered to be shepherds and angels.  Sitting on straw can be rather uncomfortable and "Mary" called out, "The straw is prickling my bum!" and everybody laughed.  Once the story had been told and the company was assembled in the stable, the organist played Away In A Manger and everybody sang because everybody knew all the words off by heart.  By heart.  There was an awful lot of heart in that garden that night.  A messy group of people, of all ages and in varying states of health, and a little dog called Bobby, surmounted the rubbish that was thrown at them obstacles which were put in their way and came together in a spirit of love and hope and made the best nativity service they had ever been to.  They are still talking about it and recently, one of them said that it's the best nativity service anyone has ever been to. 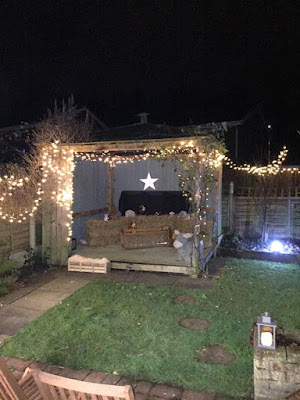 So I wish you all a Christmas filled with love and hope.  I know that it's a very difficult time for some people so I remind you that it will be over quite soon and if there can't be love, there can be hope.

See you on the other side.