Cradle on the Waves by Mae Leveson

Hello, thank you for popping in. February is zooming by, I am a year older than I was last time I was here and I have a little adventure to share with you soon but in the meantime, I am going to shamelessly plug a book. 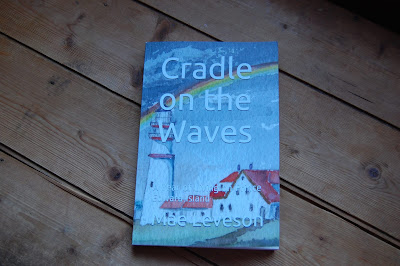 At the end of last year, having reached and surpassed my reading target by miles (yippee!) I decided that this year I would read only longer books of at least 450 pages.  However, when I saw that Mae Leveson had published her book, Cradle on the Waves, I had to make an exception.  I must be completely honest and tell you that I bought the book because the author is my friend and I wanted to support her endeavour but I must also tell you that having begun reading it, I couldn't put it down; literally, I read all 175 pages in one day and when I reached the end, I felt disappointed that there was no more to read.

Mae is "a displaced Yorkshire lass" who lives in Canada and who, after several years of city life, moved to Prince Edward Island with her husband in 2017.  The book is an account of their first year there where they encountered a long, snowy winter, a short, intense summer, beautiful skies, red squirrels, ospreys, muskrats and skunks.  There is a bit of history and a bit of Anne of Green Gables, which has made me want to read that book again.  Mae does a lot of walking, a lot of baking, not as much gardening as she would like, a bit of knitting, a bit of watercolour painting and drinks a lot of tea, her favourite brand being Yorkshire Gold, obviously!  I particularly enjoyed the passages she writes about cooking: baking the Christmas cake, "The house is filled with the aroma of warm spices and hugs me like a comforting blanket" and the taste of her freshly-made lemon curd "transports me back to childhood when my mum used to put lemon curd on my toast."  After all, cooking is about much more than the food itself, isn't it?

The book is divided into twelve chapters, one for each month of the year, with a prologue and an epilogue.  It's an easy read and I think it's the kind of book a reader could dip in and out of - in fact I did that when it first arrived through my letterbox, before I settled down a couple of days later to read it from start to finish.  Another of the reasons I enjoyed it is that living in Prince Edward Island is so very different to living in England and I liked that window into another part of the world, which Mae describes well.  Storm Chips, anyone?

So, although I bought the book because I wanted to support a friend, I am recommending it to you because I very much enjoyed reading it, despite the fact that it's not my usual genre.  It's available on Amazon in paperback (which is what I bought because I am unashamedly old-fashioned) and in electronic format and Mae is blogging here if you would like to hop over and meet her.  I hope you do because she's lovely.