Hello, and thank you for your kind comments on my last post.  Today is the fourth Thursday in November and when I looked at my Facebook feed this morning I saw that the poet David Whyte, who is based in the USA, had posted part of his essay on Gratitude.  Thanksgiving and Gratitude have been on my mind recently.
At the beginning of last month I was driving home from The Teacher's house when my car broke down about four miles from home, in a residential area.  She had invited me to stay for tea but I had (reluctantly) declined her offer and, as the light was lovely that afternoon, I decided to take the picturesque route home rather than the fast route - I often do that when the weather is good because the countryside is so pretty.  Just before 4.30pm the clutch stopped working while I was waiting at temporary traffic lights which had been set up just before some roadworks, and the car was undriveable.  I put the hazard lights on, got out of the car and walked down the queue of cars behind me, explaining what had happened and telling the drivers to drive around me.  I returned to the car, locked myself in and checked my mobile 'phone: I only had 6% battery power left.  I rang the Best Beloved and left a voicemail message, then I rang The Teacher and told her what had happened and where I was, explaining that if my 'phone ran out of charge she would have to liaise with her father.  I rang the garage I always use to service the car and asked if someone could come out to me but the mechanic explained that he was the only one there so he couldn't leave.  The Best Beloved then rang me and promised to come and find me.  He thought he would be able to get the car going but if not, he would ring the breakdown service.  I was in a bit of a state but all I could do was sit in the car and wait.


He arrived about an hour later, while it was still light, but in the meantime, a rather lovely thing had happened: the two men who were working on the road came over to find out what was happening and pushed the car, with me in it, into a safer place before surrounding us with traffic cones "to keep you nice and safe".  They were so kind.  I was a bit panicky by this point and one of them touched my head with his hand and said, "It'll be all right, Bab."  I almost cried.  So the Best Beloved found me quite easily and once he had pumped the clutch and established that I wasn't an idiot and the car really had broken down, he rang the breakdown service and they sent out a relay vehicle to load up my car (her name is Martha) and carry her home.  We were back safe and sound just after 7pm, three hours after I had left The Teacher's house.
The next morning I walked up the road to the garage and was met by the mechanic who I had spoken to on the 'phone, so I didn't have to explain the problem again.  "Where's the car now?"  he asked.  "Parked outside my house, just round the corner, " I replied.  He walked to the end of their drive, looked down the road, came back and said, "Is it that grey one down there?"  "Yes," I said, "but I'll have you know that's not grey, that's Faded Denim!"  We both laughed.  "We can push that up here," he said and so we walked down the road with another mechanic.  Once he had pumped the clutch and established that I wasn't an idiot and the car really had broken down, the two mechanics pushed the car up the road, me walking on the pavement a little behind them.  They were joined by a friendly BT engineer who added his muscle to the task.  At the end of the road is a roundabout which is very busy at 9am so...they decided to push the car up the footpath instead!  It's a sight I shan't forget in a hurry.  Neither shall I forget the eventual bill, which was £350.
We weren't expecting this expense, the car having been fully serviced and passing it's MOT in September.  However, the week after all this drama our other car, Rosie, went to the garage for her MOT.  She is nineteen years old and the Best Beloved expected that she would need some work, in fact he expected that he would need to spend about £350 to get her through the MOT, but she sailed through without needing any attention at all.
I am sharing this with you because although I found it a bit traumatic, as I thought about it I realised that there were things to be thankful for.  If I had accepted my daughter's invitation and stayed for tea, I would have broken down at about 7pm and it would have been dark by then and much more scary; if it had not been such a lovely afternoon and I had decided to drive my usual route home I would have broken down on the slip road as I came off the motorway, a much more dangerous and remote place, and there would have been no roadworkers to look after me; if I lived further away from the garage, the mechanics wouldn't have been willing to simply push the car up the road and deal with the situation entirely themselves.  I am grateful for all of this, as well as the fact that we didn't have to spend any money on Rosie this time.
I am grateful, too, for our half term trip to Guernsey to visit The Mathematician.  Stormy weather delayed our departure for twenty-four hours which was very frustrating because not only did we lose the money we had spent on that night's accommodation, we lost the only full day we would have been able to spend with our island-dwelling daughter as she was unable to take a day off work while we were there.  The day before we left, Barbara over at Coastal Ripples posted that the arrival of her triplet visitors had been delayed by a day because of the weather and, as our ferry would continue on from Guernsey to Jersey, where she lives, I thought they might be travelling on the same ferry as us.  So when I saw twin girls with a brother who might be their triplet seated almost opposite us I just had to go and ask their parents if they were going to visit "Barbara in Jersey".  They were.  "How did you know that?" asked their mother, "Have you been stalking us?!"  It was a funny encounter, we all had a little chat and I asked them to give Barbara my best regards.  "I am Mrs Tiggywinkle," I said, and there was more laughter.  It does look as if they had great fun visiting Jersey and I was glad to have met them and given them a funny anecdote to recount. 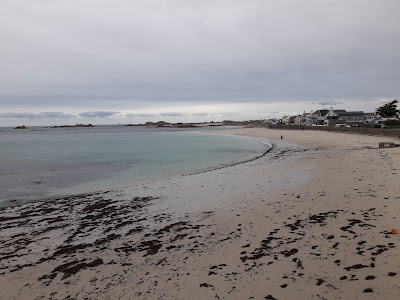 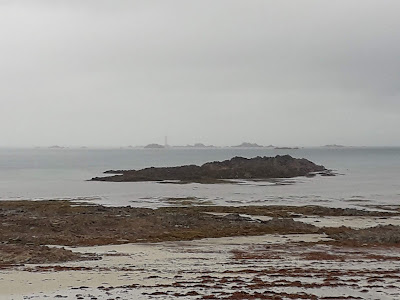 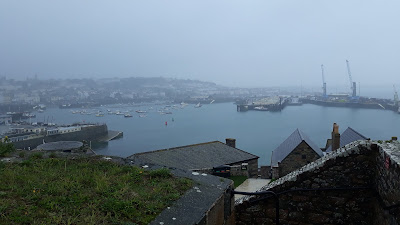 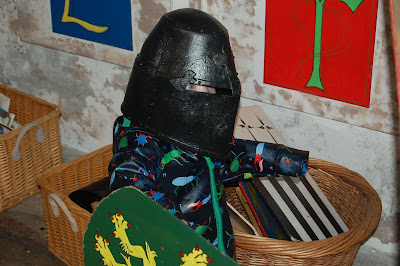 ﻿
﻿
Unlike our previous two holidays in Guernsey, the weather this time wasn't good and we didn't see the sun at all.  We were able to get out to a beach three times, wrapped up against the cold in coats and hats, and Tom Kitten was thrilled to make sandcastles and fly a kite with his grandfather.  He was also thrilled to dress up as a knight at Castle Cornet.
However, being two years old, his favourite word is "No" and he behaves like a two year-old so inevitably, there was a bit of challenging behaviour, and his three month-old sister was teething and so cried a fair bit, and their father missed his flight and was only able to join us two days before the end of our trip AND IT RAINED A LOT.  Also, the dishwasher in our apartment wasn't plumbed in as had been promised - and I know that I sound like a spoilt brat but we don't have one at home and were looking forward to it, and the apartment wasn't cheap- and on the evening the heating stopped working I almost cried (again).  So really, you might forgive me if I thought this wasn't a great holiday.  However, as I said to the children, "It doesn't really matter because the important thing is that we are all together," and I meant it.  The Mathematician joined us every day during her lunch break and after she finished work in the evening and she was able to take one afternoon off work.  On that day we all went out for lunch together and then walked on the beach at Vazon Bay.  I held back and watched my children and grandchildren walking across the sand towards the gentle waves and suddenly, my heart was full of love and gratitude and I did cry. 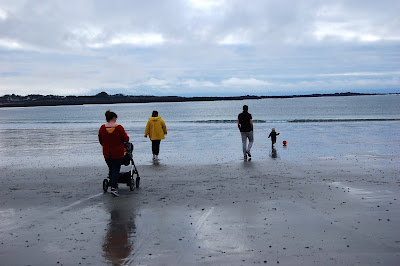 Happy Thanksgiving to all of you who are celebrating today.  I hope the day has brought you everything you hoped for.