Rolling With The Punches

Hello.  Do you know whether you are coming or going?  I'm not sure that I do.  It's just as well that the Best Beloved and I decided that we would have no definite plan this year and just roll with the punches, and this week, they have really felt like punches.  We thought that we knew where we would be on Christmas Eve and Christmas Day and then Boris popped up on our screens on Saturday afternoon and within half an hour all the rules had changed again.  We remain in Tier 2, as do The Teacher and her family, but the big change for us was the alteration of the  rules for Christmas bubbles.  Messages flew through cyberspace, telephone calls were made and eventually, new arrangements were agreed.  The Teacher and her family will have breakfast with us and a late lunch with her husband's family so that her children will see all their grandparents on Christmas Day, not ideal but that is the only day that people from different households can meet together.  For the first time since 1987 the Best Beloved and I will have Christmas dinner for two.  (We are not cooking for two: he has bought a goose!)

An hour later we met my sisters and parents online for a Zoom meeting, as we have done every Saturday since Easter.  One of my sisters remained in Tier 2, another had gone into Tier 4 and while we were speaking the rest of them went into Alert 4 in Wales.  My head was spinning.  My parents will also be having Christmas dinner for two, for the first time since before I was born.

Monday was the day of the winter solstice and this was the only day of the month for which I did have firm plans.  I wanted to watch the sun rise from the field behind The Teacher's garden, the place where I watched it rise on the day of the summer solstice and then I wanted to gather some greenery to bring into the house.  During the afternoon I wanted us to bring in and decorate our Christmas tree before going outside to watch the conjunction of Jupiter and Saturn just after sunset.  In the evening we planned to watch a Midwinter concert online.  Well, we left the house at 7.30am and discovered that there was something wrong with the electrical system in the car.  Fortunately, we have another car so we used that one to drive to The Teacher's garden but the cloud was thick so we couldn't see the sunrise, it poured with rain so I didn't collect any greenery and the cloud cover shielded the planets in the evening sky as well.  Harrumph!  However, we did decorate the Christmas tree, light the fire and the candles, acknowledge the triumph of light over darkness and watch the concert, which was great. 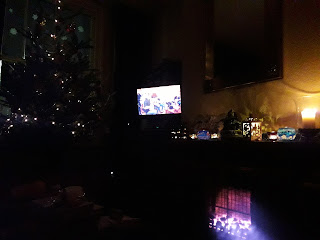 On Tuesday morning I left the house just before 7am and went to a big supermarket for the first time in nine months.  Sainsbury's was very civilised and I felt quite safe.  The Best Beloved was still in bed when I got home at 8am but after breakfast he had a proper look at his car and said that the problem was with the central locking system and although he could open the doors and the boot manually with a key, he couldn't open the fuel cap so we could only travel as far as we could get with the fuel which was already in there.   Meanwhile, I was on the 'phone to Italy.  I ordered a box of wine seven weeks ago which had gone astray.  I had been e-mailing the company to chase it up and the last communication I received from them stated that the order was being processed in the warehouse.  That was a week ago so I rang them to find out what was happening.  I spoke to a very nice woman who told me that the wine was still in Italy but assured me that I would have it before Christmas.  I told her that I wouldn't have it before Christmas because of the restrictions being imposed on travel between the UK and Europe and lamented that I would have to have a cup of tea with my Christmas dinner.  She then said that the wine would definitely be with me before the end of the year.  I am not hopeful and think that I might be toasting the new year with a cup of tea as well.

In the evening the solid cloud cover hid the conjunction of Jupiter and Saturn again.  The Best Beloved drove out to a dark, rainy car park to meet my brother-in-law and exchange Christmas presents.  We have always called this a "sleigh run".  He returned with wine, a gift from my parents for Christmas Day, and while he was driving home the car's electrical locking system had sprung back into life so he made the most of the opportunity and drove to the petrol station to fill up.  Hooray!

Today it has rained and rained and rained and I have felt very tired.  I wrote this blogpost this morning and the laptop lost its internet connection before I had saved my musings so they disappeared.  Fanbloomintastic.  The Secretary of State for Health gave a press briefing  at 3pm and announced that other counties will be going into Tier 4 on Saturday and to be honest, I felt relieved because when he started speaking I thought he was going to announce that nobody could mix with any other households on Christmas Day. Things change so quickly that it's hard to keep up but we remain in Tier 2 so we can still meet other people outdoors.

At times this week I have felt as if everything is going wrong.  We had a dodgy moment at lunchtime today when we thought the Christmas tree lights had broken but we held our breath and they came on - phew!  There is still time for the Christmas rules to change, the Secretary of State hinted at that, so I don't actually know where I'll be or with whom but we have a goose, wine, candles and fuel for the fire so we'll be fine.  I'm so glad we decided not to make firm plans.  And I'm really sorry about that annoying central alignment of my first paragraph but I can't make it fully justified.  Hey ho, it's 2020.