Hello, thank you for dropping in.  Firstly, I'm sorry that the font changes halfway through this post, I know that it's annoying but I have tried and tried but I can't do anything about it.

Everything here feels very wet.  We have had a lot of rain over the last couple of weeks - the Best Beloved says that he has never seen so much rain - but we have also had sunshine and snow.  Fortunately we live far enough away from rivers that we have not been flooded but our weekly drive to The Teacher's house takes us past lakes where fields should be and rivers which have burst their banks.  (I should explain that the lockdown rules allow us to form a childcare bubble with her family so we go to her house when she and her husband are both working and need essential childcare, usually once or twice a week.)   We are glad to have had snow, it feels like a real winter.

In ancient times the Celts celebrated Imbolc on 1st February.  Halfway between the winter solstice and the spring equinox, with longer, lighter days and the birth of the first lambs, they regarded it as the first day of spring and honoured the goddess Bride.  When the Christian church took over the pagan celebrations it gave the day to St Brigid of Kildare and her story became entwined with that of Bride.  In the sixth century the Byzantine Emperor Justinian I declared that Candlemas should be celebrated in churches on 2nd February, forty days after Christmas Day, which meant that celebrations began on the evening of 1st February.

In the church calendar this date became The Feast of the Purification of the Blessed Virgin Mary and remembered the day when the infant Jesus' parents took him to the temple so that Mary could receive the ritual of purification and the baby could be presented to God.  Although I have read that this is a Jewish tradition I'm sure that the purification is also a Christian tradition as a few weeks after my elder daughter was born my friend's mother, who was born in Yorkshire in the 1930s, was surprised to hear that I had been out before I had been "churched", which should have been when the baby was six weeks old.   The old Churching of Women service has been replaced in the Church of England by a service of Thanksgiving for the Gift of a Child and quite right too as far as I'm concerned, I find the notion that a woman needs to be purified after giving birth to be repugnantly misogynistic.  After the Reformation, the Protestant church shifted the focus of the day from Mary to Jesus and it became the day to celebrate The Feast of the Presentation of Christ in the Temple.  Anyway, to return to this story, an old man called Simeon recognised Jesus as the son of God and declared him to be "a light for revelation to the Gentiles, and the glory of Your people Israel.”  From this text Jesus is described as the Light of the World and so it became the day on which people would bring their candles to church to be blessed alongside the candles which the church would use over the forthcoming year.  So, as far as the Church is concerned, it's all about light and candles but the people still celebrated in their homes and had a bit of a party, placing lighted candles in their homes and giving candles as gifts on this day.

More than any other year, I wanted to celebrate Candlemas this year and I'm not really sure why but as I read more about it I felt the attraction of lighting candles to dispel the metaphorical darkness of living in a global pandemic, using them as a symbol of hope now that the vaccination programme really is underway in this country.  Reading about the ancient practices, I really understood the longing for spring - please don't misunderstand me, I'm an astronomical kind of gal and I know that spring will come with the equinox in March, but half the winter is behind us now and I am ready to look ahead towards the spring.  My celebration would have to be something I could do by myself and looking around the internet I found a Forest Church video entitled "An Outdoor Celebration for Brigid-tide and Candlemas".  It looked just right for me.

The introductory video told me that I would need a bonfire to burn my Christmas tree, a candle in a lantern or jam jar and a wassail -  a warm, mulled drink of beer, cider or apple juice.  Well, this might have put me off because for the first time EVER, the Best Beloved chopped up our Christmas tree and put it out with the recycling weeks ago and he informed me last weekend that both our garden incinerator and fire basket disintegrated at the end of last summer.  Harrumph!  Secondly, I did not have any of said beverages to mull.  However, I decided that as I was a Girl Guide in my youth, I know how to be resourceful.  I found a small foil tray in the kitchen cupboard and put some tealights in it to make a substitute bonfire and I poured the last of my homemade blackberry vodka into a jug with a cinnamon stick and heated it up in the microwave.  I was ready. 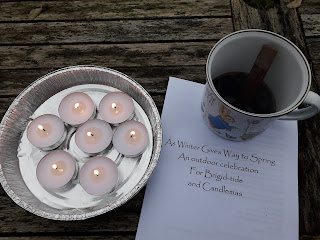 I sat in the garden by myself and played the video.  I lit my tealights and fed my little fire with dried stems of lavender pulled from the bush.  At this point I realised that I shouldn't have used so many tealights because with such a lot of melted wax, the fire blazed and grew and I almost burned down the wooden table.  Almost.  I sang loudly and merrily.  I lit my candle and in the absence of fruit trees or bushes, I drank my blackberry vodka and wassailed the lavender.  I sat quietly and looked around at the new, living green shoots.  It began to rain but I stayed outside until the film, and my celebration, was over.  I came indoors feeling more connected to nature, to the rhythm of the seasons and to God.  I also felt more hopeful and more myself.  I think my equilibrium has been restored. 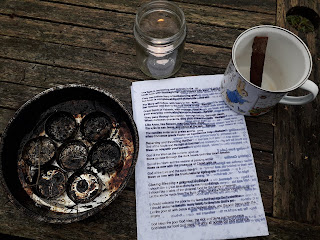 While reading about Imbolc in preparation for writing this post I discovered that the bramble is sacred to St Brigid and that its leaves and fruits are used to attract prosperity and healing, so my blackberry vodka wasn't out of place, after all.  I shall have to make some more this year because I would like to celebrate Brigid-tide and Candlemas next year in a similar fashion...but with other people and a bit of a party.