So That Was February

Hello, thank you for dropping in here, you are very welcome, as ever.  I haven't been here for more than a month, for which I am sorry, but really, I didn't think I had anything interesting to share with you; I certainly haven't been anywhere interesting.  However, this week I suddenly have lots of things I want to write about so I thought I should start with February and when I looked back over the month it seems that some things did happen.

I celebrated my birthday at home with the Best Beloved and a bit of a tear in my eye because the day marked a whole year since the last time I saw my younger daughter. The Best Beloved did his best to make sure that I had the best possible lockdown birthday: he gave me smoked salmon with a poached egg on toasted homemade bread for breakfast, we had croissants for elevenses and he went to Marks & Spencer's food hall to buy a treat for dinner. I made myself a birthday cake because he's really not up to that. During the afternoon we lit the fire and watched a film together, a rare occurrence because we don't like the same kind of films, but I was allowed to choose (gasp!) so we watched The Dig, a film about the discovery of the Anglo-Saxon treasure at Sutton Hoo. (Some of you may have read Simon Stone's novel on which the film is based, but I haven't.) We both enjoyed it, him more than he expected to. In the evening I really enjoyed a video meeting with my sisters and parents, during which I wore a tiara and drank champagne - after all, it was my birthday!  The following day was a babysitting day and I was able to celebrate all over again with The Teacher, Tom Kitten and Cottontail and even though I had to cook the dinner myself this time, it was super duper to be with them.  They had even made me a cake, which was a big deal because The Teacher doesn't enjoy baking and she had borrowed the equipment from a friend, which of course made it all the more special.  She's a good girl. 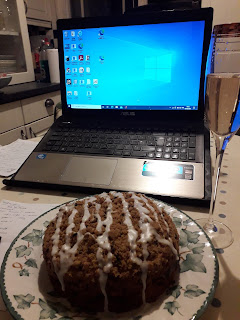 The Best Beloved really isn't interested in Valentine's Day so I gave up hoping and bothering several years ago.  However, I did receive a card - from somebody else.  The Mental Health Collective organises a card exchange several times a year and this is the third time I have participated - I was given a name and address and somebody different was given mine.  We are asked to send a card or letter with encouraging words to our recipient, that's all, and the theme this time was Love, goodwill rather than romance.  It's not terribly onerous but I really believe that it can make a big difference to the recipient.  I received my card a couple of days early, before the posting date, and I was bowled over because the sender had obviously spent some time and effort making it, even though I am a complete stranger to her.  I wanted to pass on that kindness in a similar way so I set aside the card I had bought and instead spent an afternoon making a card to send.  Here is the card I received.  It's still on my mantelpiece. 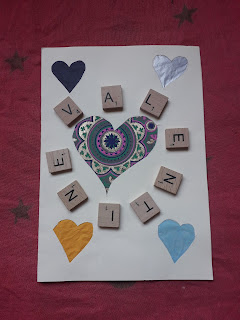 Well, I didn't go to be shriven of my sins but I did eat pancakes.  I had decided that this year's pancakes would be Scotch rather than traditional or American so I made up the batter before we ate dinner, ready to cook afterwards.  The Best Beloved then decided that he wanted to do the cooking - I don't know why, this task always falls to me and I'm not sure that he has ever cooked a pancake of any variety before, but he was quite sure.  He went into the kitchen, instructed me that I was to stay outside and closed the door firmly.  Well, obviously I couldn't help myself and I quietly crept in and snaffled this photo without him realising.  I couldn't stop laughing - it's the smallest pancake in the world!  He told me that it wasn't his fault, that my batter was too thick (how very dare he!) and would not accept any advice or information about the niceties of pancake batter. 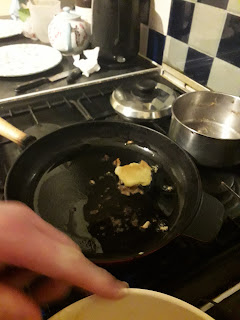 I was shoved sent out of the kitchen, the door was firmly closed again and a little while later he presented me with these.  I was very polite and appreciative (and stifling laughter). 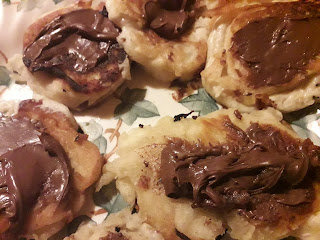 My 'phone rang one afternoon and even though the call was from an unknown number, I answered it, which is unusual.  I am very glad I did because the call was from my GP surgery, offering me a covid vaccination two days later.  I was very surprised, accepted the invitation and asked if the Best Beloved could also be vaccinated at the same time as we fall into the same category.  We were given consecutive appointments and two days later, the deed was done.  I was very impressed with the whole set-up, we were given appointments in May for the second dose and neither of us suffered any side effects.  The Best Beloved was relieved because it meant that by the time he would return to the classroom, he would be almost three weeks post-vaccination, long enough for it to provide him with some protection.

I finished reading A Suitable Boy on 26th February, so it took just over seven weeks.  I smile when I think about this book and I miss it already because I enjoyed it very much, all 1,474 pages of it.  James Wood reviewed it in The Guardian as "vast and amiably peopled" and that's one of the things I liked about it, almost all the characters are likeable.  I also found it very visual - the clothes, jewellery and gardens are vividly described and painted beautiful pictures in my head.   This book isn't difficult to read, it's all storytelling and there's no need to read between the lines, it's just long, but hey, we're in lockdown, I had little else to do but read, and I am glad to have read this. 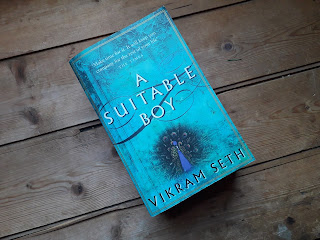 I am still slowly working on Tom Kitten's jumper but at the beginning of February I discovered that my cousin, a teacher, has to spend all day at work with the windows and doors open (to reduce the risk of covid infection) and that by the time she gets home she is frozen so I knitted her a pair of woollen socks to keep her feet warm.  She has very dainty feet so they didn't take as long as usual and I used some lovely Drops Fabel in Salt and Pepper (shade 905).  I was very pleased with them and so was she, it is lovely to be able to make people happy. 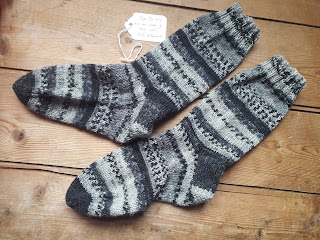 Now here we are, halfway through March and less than a week away from astronomical Spring. The Best Beloved returned to work when the schools reopened to all pupils a week ago and on the Sunday evening he had a shave, ironed a shirt, polished his shoes and put his face shield, mask and hand sanitiser into his briefcase. The following morning I wondered aloud if I should take a photograph of him on the doorstep, the way we used to do when our children returned to school on the first day of the new school year, because that's how I felt. I am now allowed to meet one friend in a public place for a chat so that's what I am planning to do on Thursday and I can't bloomin' wait. The world is still turning.

Email ThisBlogThis!Share to TwitterShare to FacebookShare to Pinterest
Labels: Knitting and Crochet, Reading