Hello, and Happy Easter, whenever you are celebrating!   According to the Anglican church, Easter is a season rather than a weekend and lasts for about seven weeks so my greeting isn't late at all, and some of you may not have celebrated Easter yet if you follow a different church tradition, but I'd like to share with you how I spent the weekend itself. 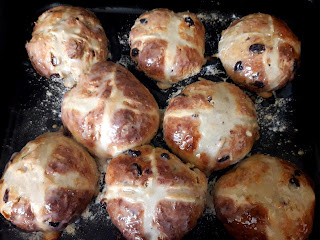 Good Friday is alternatively known as Hot Cross Bun Day in our house.  I ADORE those sweet, spicy, fruit-studded buns but I never eat them before Good Friday, when I shamelessly eat as many as I can get away with.  When I was young my father used to go to the bakery first thing in the morning and bring home a bag of them for our breakfast, still warm from the oven.  Mmmm!  When I was first married I expected the Best Beloved to do the same but it turns out that he doesn't like them so I was disappointed.  Frankly, HXBs are so important to me that it's amazing we are still married.  I made them myself once, more than thirty years ago, but there seemed little point in all that kneading and proving if he wasn't even going to try one so we reverted to shop-bought buns and later, the children and I would eat them for breakfast before going to the Hot Cross Bun Service at church and eating one or two more.  For many years now we have watched Jesus Christ Superstar during the afternoon of this holy day, it's the perfect day for it, and a tear or two has usually been shed.  We have the 2000 film version on dvd and I find it emotionally draining to watch, it's really quite harrowing.  I need the comfort of another toasted hot cross bun afterwards.

This year I discovered that my friend would be leading a digital Hot Cross Bun Service during the afternoon of Good Friday, preceded by an online hot cross bun bakealong during the morning, and having read many bloggers saying that homemade HXBs are so much better than shop-bought, I decided to join in.  We began at 10am and my friend had cleverly chosen a recipe which requires no kneading and only one prove - you'll find it here if you fancy it.  So we measured and mixed while she told us the bible story of the day and we chatted about our own Good Friday traditions.  I enjoyed it, and at the end of the session I had eight bun-shaped balls of dough on my baking sheet.  All I had to then was leave them to prove and another friend had given me a tip: she told me to turn my oven on to any temperature, leave it on for thirty seconds, turn it off and then pop the dough in.  I was scared that thirty seconds wouldn't be enough so in fact I left it on for sixty, but I shall do thirty next time.  An hour and a half later my balls of dough had risen into glorious buns.  I piped the crosses onto the top, baked them and glazed them as soon as they came out of the oven.  I felt as pleased as punch.  I am desperately trying to avoid using the word "smug" because it's not very nice.  At 2pm I split one of those buns, buttered it and joined the online service.  That bun was delicious.  I may never buy HXBs again.  Afterwards, the Best Beloved and I settled down and watched Jesus Christ Superstar and while it was on my Guernsey daughter sent me a photo of a packet of HXBs with the message that she was just about to watch the film too.  We hadn't discussed it in advance, she just wanted to maintain our family tradition.  I cried even more than I usually do.

On Saturday I ate a couple more hot cross buns.

On Sunday I got up very early and went to my friend's garden.  I think the sunrise service on Easter Day is my favourite church service of the year but as no local churches were holding one we had decided to celebrate together in her garden.  We lit a fire, the traditional symbol of the triumph of light over darkness, read some verses aloud (quietly, so as not to disturb her neighbours), drank tea and ate hot cross buns and chocolate mini eggs.  It felt just right.  The birdsong was louder than our voices and Mrs Blackbird kept travelling through the garden to an ivy-covered wall just beyond with beaksful of nest-building materials.  A buzzard wheeled overhead.  As I drove home I noticed the blossom-covered trees, swathes of daffodils lining the roads and a sweet grey squirrel on the verge. The sky had turned blue. 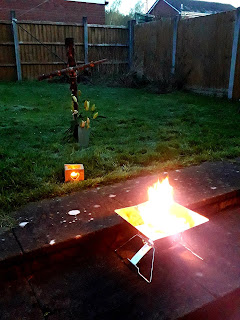 The Best Beloved and I spent the rest of the day alone.  The sun shone and in the afternoon he mowed the lawn while I was indoors as he, the non-lover of HXBs, had asked me to bake him some scones.  As I carried them out to the summerhouse I looked up and saw a heron flying over.  We ate the scones still warm, with cream and jam and accompanied by a pot of Earl Grey tea, while we watched a few bees hovering in the sunshine.   He was very happy and I felt all caked out, although it felt really good to be living outdoors again. My day was made complete when the Best Beloved told me about the evidence of fresh hedgehog activity which he had cleaned off the patio earlier! 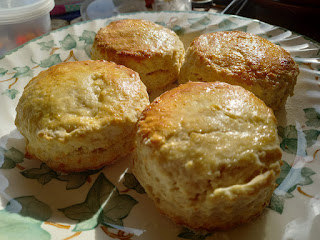 On Monday it snowed!  I sorted out the squares I had crocheted during Lent and packed them up ready for the Best Beloved to take to the Post Office.  They are on their way to Woolly Hugs, a charity who will turn them into blankets for people who are unwell. 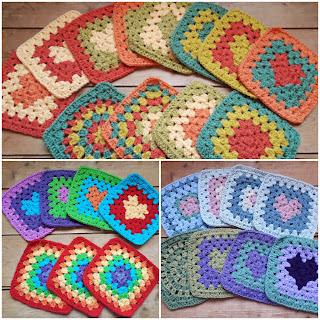 May I just mention the weather?  You know how I like to.  A week ago the temperature here was 26 degrees and I had to cover the tiny people in suncream and jam sun hats onto their heads before we went into the garden.  I almost melted.  On Easter Sunday the temperature was 16 degrees in the sunshine and today it is 6 degrees.  Snow fell on Sunday, Monday and Tuesday and my grandson is confused because he thought that winter was over and he is too young to have worked out that April can be capricious.  Here is the view from his window this morning.  This is why British people talk about the weather! 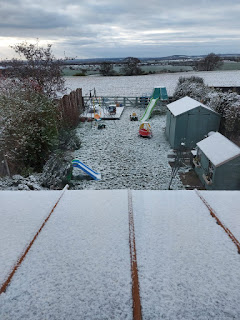