Hello!  Thank you for calling in, expecially as I have been so sporadic in posting.  I am happy that you are here.  Here we are on the last day of April, a month which, until the last few days, has been full of sunshine but very cold, with frosty mornings and even snow.  The other thing which has been abundant is blossom.  April has been white, pink, frothy and beautiful, although we haven't smiled all the way through as we lost both of our cats: Lyla was almost fifteen and rather frail, having suffered a dreadful poisoning when she was eighteen months old, and she went out one day and hasn't come home, while her daughter, Pippin, died peacefully in a basket in the kitchen one evening after a short illness. For the first time in thirty-two years there are neither cats nor children in the house and the atmosphere feels unnaturally still.  There is a new grave in the garden. 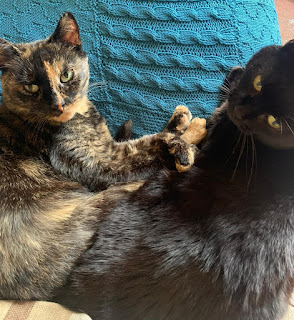 Before we bid farewell to April I thought that I really should show you the books I read in...March. 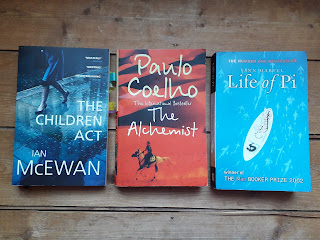 I am still trying to make my way through the unread books which are already in the house but almost as soon as I had finished A Suitable Boy at the end of February my mother sent me The Children Act by Ian McEwan with her highest recommendation so I set to straight away.  The book is about a judge in the Family Division of the High Court who has to make a judgement in a case involving a teenager who requires a blood transfusion to save his life but is refusing it for religious reasons.  At the same time, the judge's marriage is in crisis.  I haven't seen the film but I can imagine that Emma Thompson was perfectly cast as Fiona, the judge.  I thought this book was brilliant and, at only 213 pages, I read it quickly.  I, too, give it my highest recommendation.

The next book I read was The Alchemist by Paulo Coelho, and I'm aware that I'm arriving late to this party.  I was browsing a second-hand book stall a few years ago when the other browser, a stranger, picked this book out, showed it to me and asked if I had read it.  I was a little taken aback by his direct manner and answered that I had not.  "You should do," he said.  My face must have given my thoughts away as I hesitated because he then said, "Really, I mean it.  You should buy this book."  So I did, and it has sat on my To Be Read shelf waiting for its turn.  This book is even shorter than The Children Act at only 161 pages and if you are unfamiliar with it, it's an allegory about finding your destiny, I have even seen it described as "a self-help book", but that doesn't mean that it's to be dismissed.  I enjoyed it, it's given me food for thought and I am glad that I read it.  "Finding your destiny" is the kind of phrase which would usually put me off, and if I had known that this book was about that I might have put off reading it for even longer, but if I rephrase that as "working out what you really want to achieve" it feels more pragmatic.  The next time a stranger accosts me at a bookstall I shall be more trusting.

The third book I read last month was Life of Pi by Yann Martel.  This was another second-hand purchase which I bought because it had won the Man Booker Prize and I thought I ought to read it, but that was a long time ago and I just didn't really fancy it.  This is also another film I haven't seen (there are a lot of them!) and all I knew about it was that it's about a boy who is cast adrift on the sea in a boat with a tiger.  My conceptions about this novel were all wrong and in fact, I loved it.  I expected it to be a rather philosophical text but it isn't, it's simply a wonderful book and I am not going to spoil it for you by telling you why.  If I ever see it on a second-hand bookstall, I shall be pressing strangers to buy it.

I shall save my April reading for another post.  Tomorrow is May Day.  When I was a child in the 1970s I skipped around a maypole on the school playground wearing bluebells in my hair but I shan't be doing that tomorrow.  However, I may get up early and wash my face with the dew - unless it's frosty!