A 1995 Weekend with the England Men's Football Team

Hello, thank you for popping in.  We're getting excited here about the Euro 2020 final this evening - I'd really like to be in my cousin's house because her husband is Italian and whatever the result, there will be a celebration!  I keep telling the Best Beloved that football is "only a game" but he doesn't believe me. 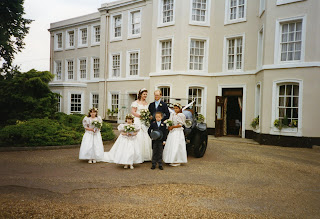 In June 1995 my youngest sister got married and the day before the wedding we discovered that the England men's football team were staying in the same hotel while they were participating in a friendly international tournament at Wembley.  I wanted to share some of the stories from that weekend here so yesterday, I asked my family to send me their memories.  I'll begin with one of mine: we arrived at the hotel in the morning and it became apparent that the staff were so busy dancing attendance on the footballers that they were overlooking their other guests.  I ordered a pot of tea and had to wait for forty minutes before it appeared.  As my name means "grumpy until I have a cup of tea" this was tricky, even more so as I was ten weeks pregnant, full of hormones and had just spent almost three hours travelling so I really needed that soothing pot of tea and forty minutes felt like four days.

I was walking through the hotel with my sister, mother and grandmother, who was 83 years old and walked slowly and uneasily, when David James walked out of the gym and started following us.  When we reached the bottom of the stairs, three of us stood back to allow the sprightly Mr James to go up ahead of us as my grandmother's pace was so very slow but she was oblivious and began climbing them anyway.  Mr James was an absolute gentleman, he ushered us up behind her and brought up the rear at our snail's pace, waiving away our apologies.  I loved him for that and have held a fondness for him ever since.

One of my sisters took my 6 year-old daughter to the hotel's swimming pool and saw a young chap in the weights room as they walked past.  The Best Beloved joined them a little later, VERY excited because he had just seen Alan Shearer in the weights room.  "Who's he?" asked my sister.  After their swim, the Best Beloved went into the male changing room and found most of the team in there, half-naked, and was enjoying chatting with them until he realised that our daughter had followed her daddy in there.  He sent her out to join her aunt and carried on chatting.

Lots of our stories happened in the evening, after the ceremony and the wedding breakfast, when the team and their managers appeared in the hotel bar.  Some people were a bit starstruck and Terry Venables (Team Coach) and Bryan Robson (Assistant Coach) were gracious in signing autographs and having photographs taken but there were security staff there to ensure that we didn't take any photographs of the players, so this photograph of a card game shows only my sister and my cousin and omits the other players, David James (you can see his legs!), Jamie Redknapp and Steve McManaman, but her signed order of service proves that they were there. 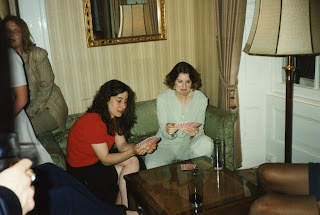 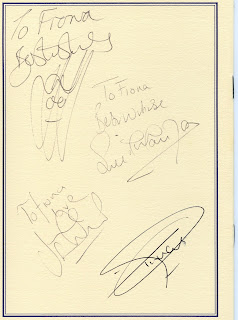 The page boy was ushered up to Bryan Robson by his grown-ups and held out his new football for an autograph.  "What's your name, son?" asked Mr Robson.  "Luke," mouthed the child as no sound came out of his mouth.  He was completely overawed.  The lovely Mr Robson signed the ball and then took it away so that the whole team could sign it, too.  The bride and groom later varnished that ball to preserve the signatures.  My 19 year-old cousin also wanted a signed football and about a fortnight later he received one in the post, also signed by the whole team.

During the evening the bride and groom quietly took themselves outside for a walk in the hotel gardens and some peace and quiet.  While they took a turn around the lawn, Paul Gascoigne joined them and chatted to them about the bad press he was receiving.  A minder followed them the whole time.  My sister recalls that Gazza was "sober and very pleasant" and when he congratulated the newlyweds, he shook the groom's hand, kissed the bride's cheek and asked them to ensure that the party didn't go on too late or too loud!  Gazza also had a quick, friendly word with my 85 year-old grandfather, a lifelong football fan, and made his day.

The team had a coach to transport them to and from Wembley and my daughter and the page boy were very excited to be invited onto it.  They were each given a chocolate bar from the fridge and a copy of the team's new official magazine, called "ENGLAND".  My sister couldn't resist the opportunity to sit in the driver's seat. 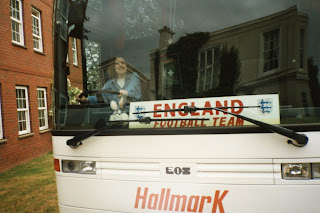 Our most memorable story involves Bryan Robson (again).  Here he is with two of my sisters and me, wearing a t-shirt bearing the name of the tournament sponsors. 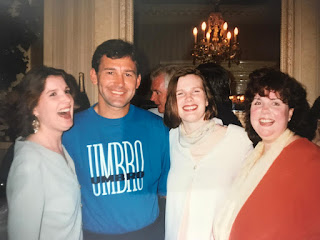 Later, he was bare-chested in the bar so I asked him what had happened and he replied that my aunt had his t-shirt!  She still has it - she sent me this photo yesterday. 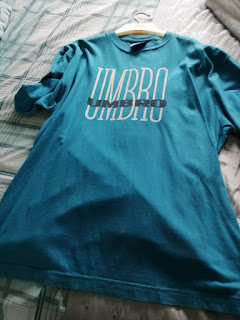 And I still have the ENGLAND magazine. 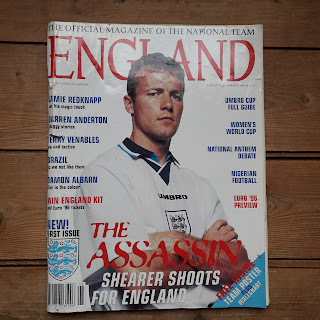 Understandably, I think my bridal sister was a bit disappointed when she learned that the England football team would be staying in the hotel for the weekend of her wedding because with so many football fans in the family, she was worried that they might be more interested in the team than in the wedding. However, twenty-six years later, although we have our stories and our souvenirs, when we think of that weekend and recall the anecdotes, we always refer to it as her wedding weekend and thoughts of her and her husband are always at the forefront of my mind.  She still has him, too. 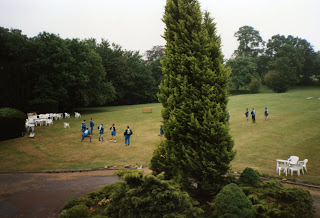 The morning after the wedding the football team was training on the hotel lawn and one of my sisters leaned out of her bedroom window and took this photo (please don't tell anyone, it was strictly against the rules and we might get into terrible trouble!).  That afternoon, they boarded their coach, found two chocolate bars missing from the fridge and went to Wembley where Brazil beat them 3-1.