The Sock That Didn't Want To Be Knitted

Hello, thank you for popping in to read my musings.  I was away again over the weekend, staying with family in Wales and being well and truly looked after.  My diary is beginning to fill up - actually, it's not, there are only eight events planned betweeen now and the end of August but after so many months of staying at home that feels busy and it's making me feel a bit anxious.  I shall have to pull up my big girl pants (Kay, that's knickers, not trousers!) and be brave.  In the meantime, there will be some soothing domesticity at home to keep me grounded.

So here is the tale of a sock which didn't want to be knitted.  I knitted the first one without any problems at all but as my needles were weaving the yarn and the sock grew I realised that it was a long pattern repeat and that matching up the yarn for the second sock might be difficult.  I do like socks to match each other, although I know that some people are not as bothered as I am if they don't, and even though these socks were a gift for somebody else I needed them to be identical twins.  Had I known how difficult this would be with this yarn I wouldn't have bought it, although I love this colour and I am almost (but not quite!) wishing that I had bought some more of it for myself.  This is Drops Fabel 672 and the colour is called Bourgogne.

Having finished the first sock, I started winding yarn off the second ball until I reached the place where the colour matched the first and I could begin.  I wound and I wound and I kept on winding.  The colour change was subtle and I couldn't be sure of the exact point at which to stop.  Eventually I found it, at least I thought I had, and I cast on.  After knitting sixteen rounds of the cuff I realised that I had not found the right point so I pulled out my needles, undid all my work and began winding off more yarn until I found what I thought was the right place to cast on again.  This time I had found the exact point and as the leg emerged it matched the first sock beautifully.  Hooray!

Everything was going well until my yarn became tangled up so tightly that I had to cut it.  That wasn't really a great problem as I made a beautiful, invisible Russian join and spliced the two ends together...except that I joined the ball of yarn to the tail at the top of the cuff instead of the working end!  Grrr.  I cut the yarn again and made another invisible join, this time using the right ends.  Off I went again, around and around the needles.

I finished the leg and began to knit the heel flap over thirty stitches.  I made a serious mistake at this point: I did this while I was at my daughter's house and after knitting six rows I set the sock aside and went upstairs to read her children a bedtime story.  I really should have known better.  When I came downstairs and picked up the needles again there were only twenty-nine stitches!  I counted several times, in horror, in the hope that my counting spell would cause the missing stitch to reappear but alas, there really were only twenty-nine stitches and I couldn't work out where the missing one had gone.  There was nothing for it, I had to pull out the needle, take back those six rows and start again.  Harrumph!   This time I ensured that I was at home, by myself, with no distractions as I counted every stitch, and after thirty-five rows I still had thirty stitches.  Phew!  However, it was apparent that the pattern on this knitted heel flap did not match the pattern on the first sock; I must have knitted one row short on the leg and although it didn't show up when I finished it, knitting the heel flap over only half the stitches made the difference glaringly obvious.  Again, there was nothing for it, I had to pull out the needle, frog those beautiful thirty-five rows and knit one more row on the leg of the sock.  I was, to put it mildly, quite frustrated!  The third time I knitted that heel flap, at home, by myself, with no distractions, I was successful but I was beginning to curse the sock.

Once the heel flap is complete I always feel that I am on the home straight with a sock, unless it needs to fit a very large foot, in which case I have sometimes been on the verge of losing the will to live, and I was able to complete that sock without any further mishaps.  The pair of identical twins were duly wrapped and posted off to Scotland, where the weather allows woollen socks to be worn for many months of the year, and their new owner reported that they were a perfect fit and she was beyond delighted.  I think that makes all the splicing, frogging and reknitting worth it - but only just! 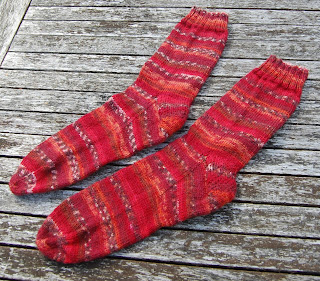 Some of you may have struggled with some of the terms I have used in this post, and I have never met a non-knitter who knew that socks have gussets!
See you soon.
Love, Mrs Tiggywinkle x
Posted by Mrs Tiggywinkle at July 06, 2021