Hello and Happy New Year. I really hope that 2017 will be a better year than 2016, which was particularly difficult for me.  I haven't made any resolutions but, prompted by a friend, I have set myself a few goals which I hope to achieve before the end of this year so I am busy making plans and lists; I do love a list.  I also love a list of Five and so today I am joining Amy's Five On Friday at Love Made My Home to share with you five of my Christmas presents. 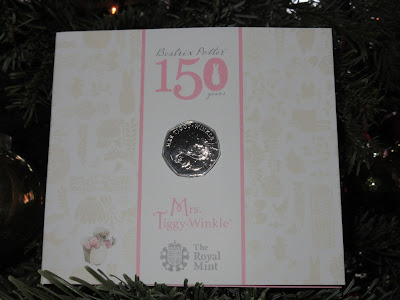 The 150th anniversary of the birth of Beatrix Potter brought an outpouring of commemorative items onto the market and I was hopeful that something would make its way into my Christmas stocking.  I was not disappointed: my thoughtful sister bought me this special 50p piece from the Royal Mint.  Obviously, I shan't be spending it! 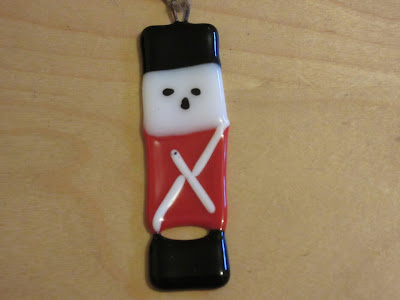 The Teacher gave me this to hang on my Christmas tree.  It was made by the sixth form students at the special school where she works and I think it's beautiful, as she knew I would.  (I tried to photograph it in situ, hanging on the tree, but my photos were rubbish!)
3.  Tiny Churches 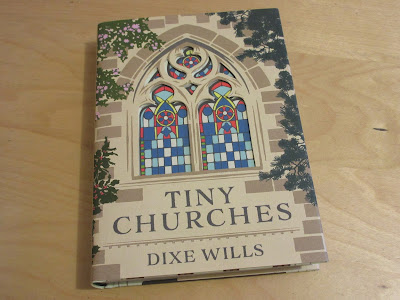 If you've been visiting me here for a while you might have worked out that I like visiting churches.  I'm not sure why but I think it's because no matter how old or how big the church is, there will always be an altar which will (almost) always be placed under the east window, there will always be a font, a pulpit, pews or chairs, and yet these fixtures are always different.  There are stories to be told and I like decoding the clues.  This book was a gift from another thoughtful sister and it turns out that I have already visited a few of the churches in this book, although I have never written about them here, so I think it must be time to revisit them!
4.  A Rather Battered Little Book of Poems 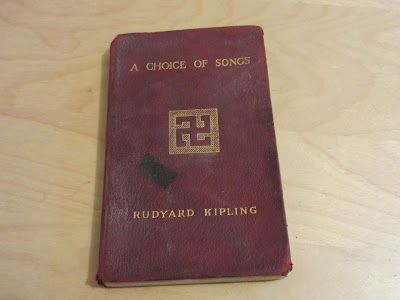 My mother gave me this book and it is real treasure.  Obviously, it's not new and the inscription shows that my grandmother gave it to my grandfather on his 39th birthday which means that unlike many of their possessions, it survived Hitler's blitz on London during the Second World War.  There is more treasure within its leaves: a newspaper cutting, a fragment of a poem written by my great, great uncle, James McKeon of Cloonfad.  I wonder when that was tucked inside? 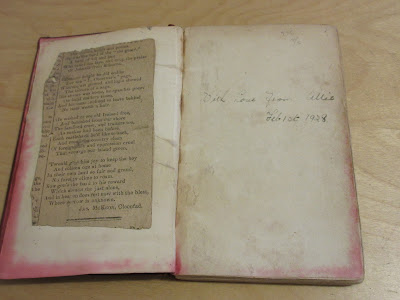 Click on the photo to enlarge it and read the inscription.
5.  A Trip To The Theatre 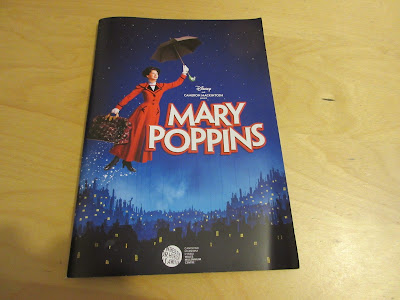 Every year at Christmas my parents take their children and grandchildren to the theatre, at enormous expense as there are now twenty of us.  This tradition began in 1980, I think, when they brought together grandparents, aunts, uncles and cousins in London to see Hiawatha at the National Theatre and although we had a few years' break, it's now an annual event.  Cameron Mackintosh's production of Mary Poppins was this year's treat and it was a brave choice because some of us love the film and this musical is not the same as the film - obviously.  I mean, you can't really animate the penguins on stage, can you?  However, it really was a treat for all ages and I heartily recommend it.
So there you are.  No diamonds, porsches or expensive perfume, just some simple, thoughtfully chosen things which bring me happiness.  I'm off now to have a look at everyone else's Five On Friday (or Saturday).
See you soon.
Love, Mrs Tiggywinkle x
Posted by Mrs Tiggywinkle at January 07, 2017