Hello, thank you for calling in, and thank you for the lovely comments left on my last post.  I do love reading them and I think I have altered the settings so that anyone should be able to leave a comment now without having to be "registered" anywhere.  Several of you mentioned the book about Tiny Churches and asked me to share my visits with you so on Sunday the Best Beloved and I set off to visit the first.  Although it was raining, the drive was lovely, along narrow lanes bordered by ancient hedges.  We had to stop twice to allow an oncoming car to pass but the only other traffic was on legs, two or four. 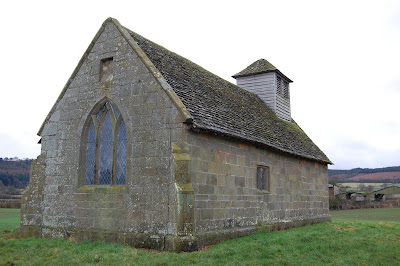 Langley Chapel, a simple stone rectangle with a small wooden bell-tower, stands in a corner of a field in a remote part of a rural county.  Farm buildings are on the other side of the field boundary.  As I stepped out of the car, all I could hear was a clamour of birdsong and the gentle bleating of sheep in a far field.  There was nobody else around and I could have been standing at almost any point in time.   I turned the heavy, iron key in the lock, pushed open the door and stepped in...to a seventeenth century Puritan time capsule.  Plain, whitewashed walls, simple glazed windows and heavy, dark wooden furniture.  A plaster frieze between the south wall and the roof is the only ornamentation. 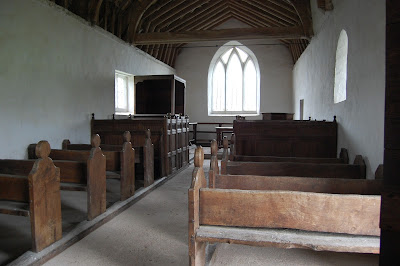 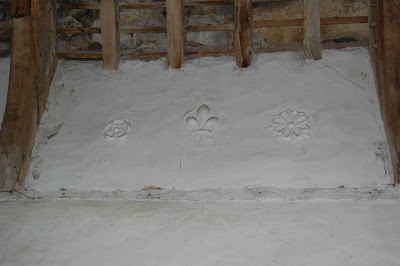 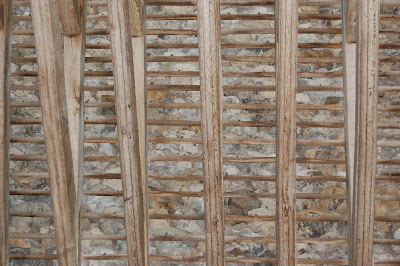 The  first thing I saw from the doorway was a musicians' desk, placed at the back of the church.  I have never seen one anywhere else.  I was drawn to it and placed my hand flat on it, feeling the echoes of those whose hands made music here four hundred years ago.  (The Best Beloved thought I was a bit daft at this point!) 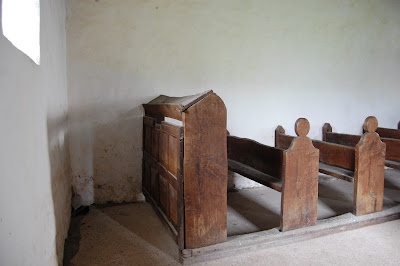 So why does does this little gem stand alone, seemingly in the middle of nowhere?  The manor of Langley was first recorded almost a thousand years ago and was one of the most substantial in Shropshire, substantial enough to warrant two water mills in the manor, and the Burnell family built a large hall here and surrounded it with a moat.  The population of estate workers and tenants was sizeable and as the manor was a couple of miles away from the parish church, in 1313 the Burnells were granted permission to build a parochial chapel on the estate so that everyone would be able to attend services.  The chapel was rebuilt in 1546, by which time the estate had passed to the Lee family, and its roof was replaced in 1601.  These last two dates are important because we are now in the Tudor period, King Edward VI has established the Protestant Church of England and a new English prayer-book, issued in 1547, introduced a new style of congregational worship.
The Reformation changed the style of Christian worship in England and so changed the layout of churches in order to facilitate that worship.  The focus of the service was no longer a mass, spoken in Latin by a priest who turned his back to the congregation and faced a stone altar placed against the east wall.  Instead, the focus was the word of God, reading from the bible and  preaching to the congregation, with communion shared with them from a wooden altar table which the priest stood behind as he faced them.  So, when Langley Chapel was refurbished at the beginning of the seventeenth century, it was done so in the modern way; the Puritan way. 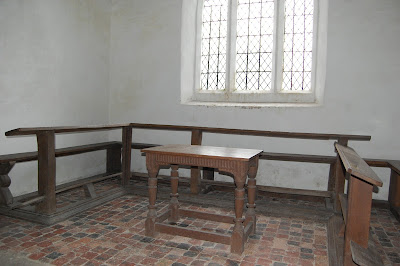 This altar table is a replica, the original having been stolen!﻿
The altar table is surrounded on three sides by benches, complete with kneeling rail so that those who wish to can kneel and those who don't can sit.  (Puritans regarded kneeling as "popish" so they always sat.) 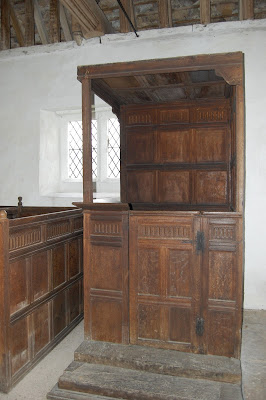 The reader's desk, from which the bible was read to the congregation, is huge, emphasising the importance of this part of the service. 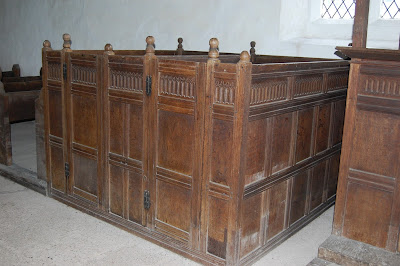 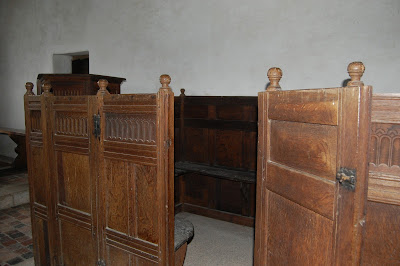 The seating here is all about social class: at the back there are benches for labourers and servants, in front of them there are box pews for farmers, millers and tradespeople, to give some protection from the draughts, and right in front of the pulpit there is a large box pew for the Lee family.  Well, if you were going to have to listen to a long sermon, you needed somewhere comfortable to sit, didn't you?
During the second half of the seventeenth century Langley Hall and its estate was passed to the Smythe family and they moved out less than fifty years later. By 1717, the hall was being used as a farmhouse and it was demolished in about 1870, replaced by a new farmhouse.  With no servants or estate workers, the population dwindled and so did attendance at the chapel's services until the last regular service was held there in 1871.  So the Victorian trend for reordering churches in a medieval, gothic style bypassed Langley Chapel and it was left alone and abandoned, its heavy tudor doors locked, its interior preserved as a time capsule.  It was repaired in 1900 and again in the 1960s and during one of those repairs the concrete floor must have been laid and the haphazard arrangement of medieval encaustic tiles set in the chancel. 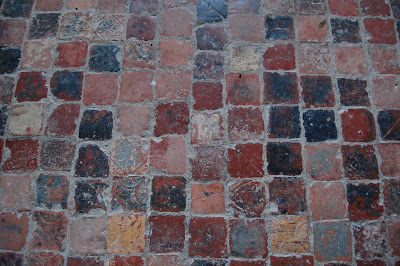 All that remains of Langley Hall is buried beneath the earth; only the chapel is left.  It is of such significance that it was taken into the care of the state, in 1914.  I have never seen a church like it. 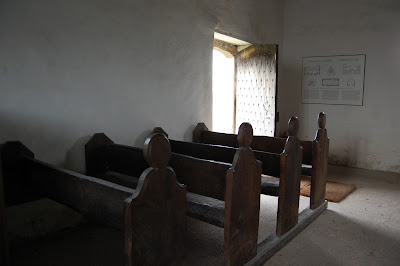