A Tale of Two Prams

Hello, thank you for dropping in, it's good to see you here.  We are still floating on a happy baby cloud here.  Tom Kitten arrived rather late and, in the end, rather dramatically, but mother and baby are both doing well.  Postnatal care has changed a lot since she was born in 1989: mums and babies stayed in the hospital for eight days for a first baby, four days for subsequent babies and at least ten days for babies born by Caesarean section.  I wasn't allowed to bring her home until feeding was established and I had shown the midwives that I could bath her on my own.  After returning home, the midwife made daily visits until the baby was ten days old, at which point we were discharged into the care of the health visitor.  The Teacher's experience was quite different: after two days in the hospital under consultant care she and Tom Kitten moved to the midwife-led unit for one night before coming home.  The midwife visited on days four, six and eleven.  The health visitor came on day fourteen and, having given The Teacher a verbal list of things she must and must not do, will visit again in four weeks' time.  Thank goodness for grandmothers who can show nervous parents how to bath a baby, dress a baby, wind a baby, launder baby clothes and generally help to build up their confidence.  We are all losing track of time and dates but Tom Kitten is absolutely adorable and we are all smitten.
When I was expecting The Teacher my parents-in-law said that they would like to buy a pram for us.  We went to the County Sleep Shop in Shrewsbury and, after much deliberation, chose a Silver Cross pram which, with its metal shopping tray, cost £158.  Of course, we didn't bring it home with us because that was thought to bring bad luck, to have a pram in the house before a baby was born; no, the shop owner suggested that he should keep it in his store room until we rang him to let him know that the baby had arrived, so that's exactly what we did.  It wasn't a coach built pram, the carry cot detached from the frame so that we could fit it into the boot of the car, but it had large wheels and springs and it was wonderful to push.  The springs meant that I could bounce it up and down the eight steps to my front door with ease and without disturbing either The Teacher or the shopping which was on the tray underneath the carry cot.
Early this summer, we returned to the County Sleep Shop with The Teacher and bought a pram, this time from the daughter-in-law of the man who owned the shop the first time we visited.  She told me that her mother had bought a pushchair there from him in 1958. The Teacher also chose Silver Cross, but this contraption is so much more than a pram: it's a complete travel system.  There is a frame into which fits a carry cot, a car seat or a pushchair seat, which can be angled anywhere between upright and recline and face backwards or forwards.  There is a change bag for baby paraphernalia, a parasol for sunny days and there are various covers for wintry days.  It doesn't sing, dance or make the tea but it is definitely a multipurpose vehicle.  The wheels are small, but the woman in the shop assured us that they think these are "the best for our county".  There are no springs to cushion Tom Kitten's ride.  No springs and small wheels, and yet Silver Cross describe this affair as having "a multi terrain off road chassis" and being "robust and built for adventure".  Pish pshaw!  I think that would be a rather uncomfortable adventure.  Would you like to know how much this marvellous contraption cost?  £795, and that was a special offer as apparently the list price is £1,000+.  When I told her that we paid £158 in 1989, the woman in the shop said, in all seriousness, "The cost of living has rocketed since then."  I looked her in the eye and said, deadpan, "The cost of prams has rocketed since then." 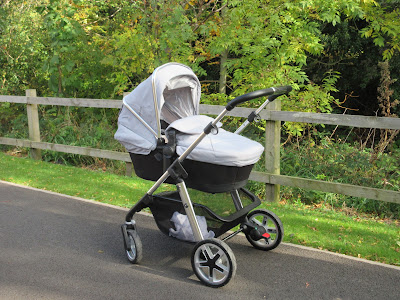