Hello, thank you for calling in, and many thanks for your congratulations on my new grandmotherly status.  When I was a child, a grandmother had grey hair and false teeth and wore an apron all day, which is not a route I am ready to go down just yet, but my cousin has assured me that she has heard that these days, grandmothers can be superglamorous.  I have aspirations.


I hope to tell you more about our adorable new bundle later this week, but today I think I need to talk about 16th October - well, two 16ths October, to be precise.


On Friday 16th October 1987 I woke up full of excitement.  I went to the bathroom and when I came back to my room in the rented flat I shared with two friends, I turned on my second-hand, black and white portable television to listen to BBC Breakfast Time as I pottered around the room getting myself ready for the day ahead and packing up my things, ALL of my things because today I would be moving into my very own house!  Completion was due to take place at midday and then I would be A Homeowner. 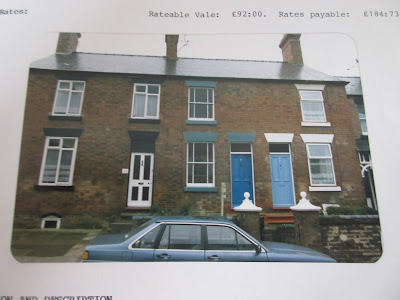 ﻿
This is an extract from the surveyor's report.  Mine is the middle house.
As I looked at the television I realised that something was wrong: Nicholas Witchell was on his own in a temporary studio.  I listened more closely and discovered that storm-force winds during the night had caused massive disruption and destruction across the country.  I went to the window and, looking out, saw that everything was exactly as it had been the previous day.  I felt a bit confused.  Shortly afterwards, the Best Beloved rang me from his home in South Buckinghamshire.  He had booked the day off work and planned to drive up to Shropshire and help me to move house.  He told me of the terrible winds during the night.  In the morning, he had gone into the bathroom and thought, "Where's the window?"  He looked out of the hole where it had been and spotted it on the other side of the garden, with lots of other debris which had been picked up and dropped there by the wind.  Apparently, here in the west midlands we had been in the eye of the storm, winds had raged all around us but the air above us had been completely still and we had slept on in blissful ignorance as the Great Storm of 1987 passed by.


The Best Beloved's journey was long and tortuous as many roads were blocked by fallen trees but after several hours, he arrived and we collected the van we had hired.  Our first task was to collect the bed which I had bought during the week, so we drove to the shop only to be told that the bed wasn't there but at the factory on the industrial estate and that we should be quick because the factory closed early on Fridays!  The Best Beloved put his foot down but we were too late and as the factory was closed over the weekend, we had to sleep on the floor for three nights until it reopened on the Monday - fortunately, the house was carpeted! ﻿
Throughout the process of buying my house I recorded every important detail in a journal.  This extract shows the details of the van hire.
We had an interesting visitor that first evening in my new house: a television licence inspector.  He said that there was no record of a television licence at my address and I replied that I had only moved in that afternoon and hadn't had time to transfer the licence from my previous address.  He didn't believe me so I invited him in and showed him the boxes everywhere and the blankets which I had hung at the window as temporary curtains.  He still appeared to be very sceptical and the following week, I received an odd letter purporting to be from the General Post Office, which administered the licences then, informing me of the penalties which I would face if I didn't buy a television licence immediately.  The letter was typed on very thin paper, not headed paper, and I still don't believe that it was genuine.  All very odd.  Perhaps he was casing the joint with a view to burglary?  My second-hand, black and white portable television, cardboard boxes and blankets for curtains obviously weren't sufficiently enticing.
So let's move forward thirty years to 16th October 2017.  Flashman returned to work after paternity leave and so I drove over to The Teacher's house early in the morning to help her with Tom Kitten (he's not called Tom and he's not a kitten but his mother and I have decided that it's a good blog name for him, so that's how he will be known here).  We knew that the remnants of Hurricane Ophelia were on their way to Ireland and Wales but the Best Beloved, who is something of a weather nerd, had assured me that we wouldn't be affected here.  The sky looked very strange as I drove westwards, thick and uniformly grey but not misty.  The temperature was unseasonably warm, more than twenty degrees Celsius and apparently, it was the hottest October day since UK records began (the average temperature here at this time of year is  fourteen degrees Celsius).  Later that morning, the solid grey sky was blushed with pink and the shafts of sunlight which fell across the floor were rose-coloured.  Outside those shafts, the light was gloomy and dim and The Teacher commented that she's not used to having to put the lights on in the morning.  The atmosphere felt most peculiar, as if it were full of an invisible something, and the orange sun burned high in the sky.  The Mathematician, who had flown in from Guernsey that morning, told me that the skies were the same in Guernsey, in Birmingham and in Loughborough.  I have read several different explanations of the cause of this phenomenon but according to the Met Office, Ophelia dragged sand and dust from the Sahara Desert and ash and debris from the forest fires in Portugal up into the atmosphere where the particles scattered the blue and green light in the spectrum, leaving the red and yellow to dominate.  In the afternoon, the winds whipped up, we watched twigs and branches being wrenched from trees and thrown around the garden and we felt very glad to be safe indoors.

In the evening, I went to a poetry evening and listened to three poets tell stories and poems, their voices rising to be heard above the howling wind outside (and the humming bar fridge inside!).  Fifty people had booked tickets but less than half that number attended and those of us who had made it were lauded for our efforts in braving the weather.  It was a memorable evening.  It was a memorable day. 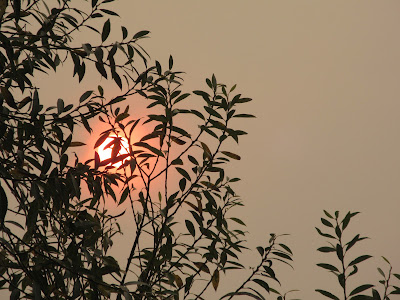 I hope you and yours have all survived the winds.  See you soon.
Love, Mrs Tiggywinkle x