Back to Anglesey to find a Hero

Hello, thank you for calling in.  It's lovely to see you here, especially at such a busy time of year.  I feel that we are thundering down the road towards Christmas and that I am running out of time to get everything done.  I know that I'm not, I planned well, began early and I'm on track, but I feel that I am fraying.  It's 5.30am and I have been awake for two and a half hours, my mind whirring.  This is absolutely normal for me at this time of year but it's still difficult to manage.  So, in an effort to gather myself together and find some serenity, I have been thinking about my little break in Anglesey last month when the sun shone, the sky was blue and the Best Beloved and I spent some quality time on our own together without the distractions of work or tiny people. 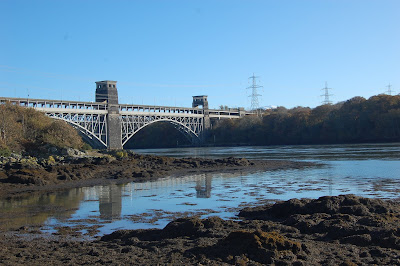 We have been visiting the island for more than twenty-five years and of course we have favourite places but each time we go now, I like to seek out a place we haven't been to before.   There are two bridges linking the mainland to Anglesey and this one is the Britannia Bridge, built between 1846 and 1850.   I had read about a statue which stands down here on the Menai Strait and I wanted to see it so on this beautiful November Sunday morning, after attending the Act of Remembrance at the cenotaph in Lanfair­pwllgwyngyll­gogery­chwyrn­drobwll­llan­tysilio­gogo­goch (which we call Llanfair PG) we drove to St Mary's Church, which is tucked away almost right under the bridge, and left the car in the car park.  We followed the path down through the churchyard.  Now, I have to say that if you like poking around churchyards, as I do, this one is delightful.  There are many different styles of headstone, some rather grand, and there is this monument which commemorates those people who died during the construction of the bridge - not just builders, but their family members, too.  It's an interesting story and you can read more about it here.  The most recent names were added in the early 1970s when the bridge was reconstructed after a devastating fire. 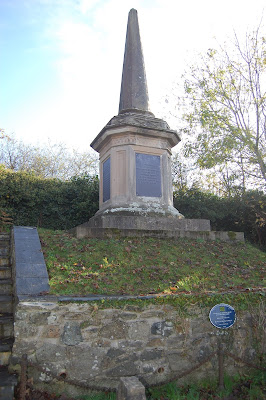 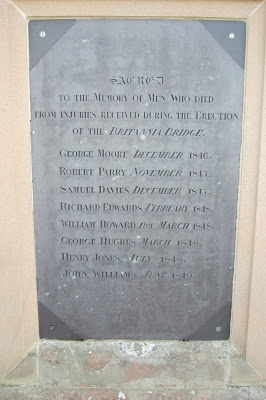 This was fascinating and we looked all around, reading every name, but it wasn't what we had come to find so we carried on and picked our way carefully down the path to the Strait. 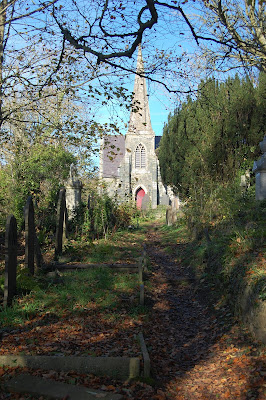 I caught a glimpse of him from the path so I knew where I was heading.  The Best Beloved went ahead of me across the seaweed and the mud and through the very shallow stream to make sure that the route was safe and I followed behind.  Here is the hero. - 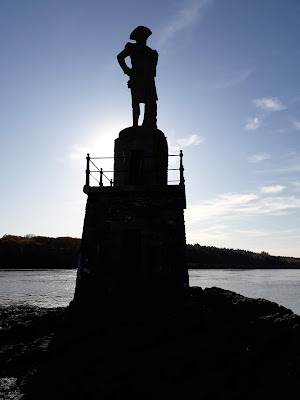 And just what is Horatio, Lord Nelson doing here, looking out across the Menai Strait?  An art lover and sculptor called Lord Clarence Paget, a younger son of the Marquess of Anglesey, lived beside the Strait at Plas Llanfair.  He had been experimenting with concrete to create statues in the grounds of the estate and liked it because it was cheaper than marble and more durable outdoors so he decided to create a statue of Neptune to stand down on the shore.  However, he was persuaded that the statue's subject should instead be Lord Nelson,  who regarded the Strait as "one of the most treacherous stretches of sea in the world" and said that "if you can sail the Menai Strait you can sail anywhere".  The Admiralty was surveying the Strait at the time and suggested that if Paget erected the statue in a slightly different place to the one he intended, it would serve as a navigation aid to sailors, marking the entrance to The Swellies, and by the time the statue was unveiled in 1873 it was already marked on the naval charts. 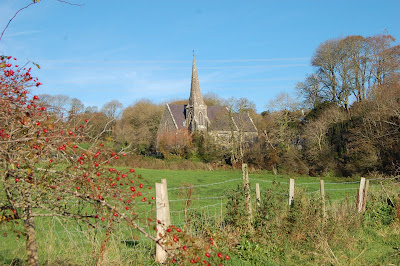 We lingered here, it was so very peaceful.  Then we strolled back to the car and on the way, I stopped for a while to enjoy the trees.  I know, I'm a bit odd, but I like trees, especially in the autumn. 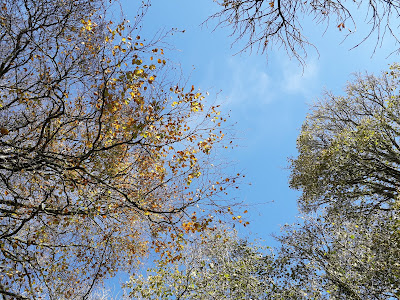 Back in the car, the Best Beloved was keen to drive off the island into Snowdonia because it had snowed the previous day and he wanted to see the mountains.  It was a very picturesque drive and we stopped at Llanberis to take some photographs. 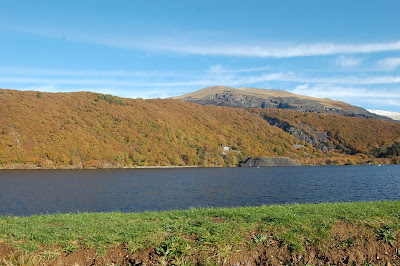 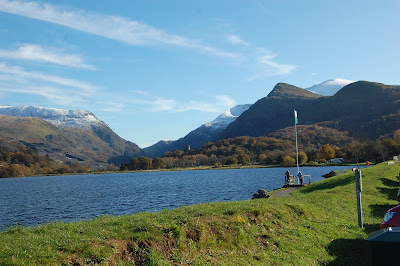 On the right at the back, under a snow blanket, is Snowdon, the highest mountain in Wales. 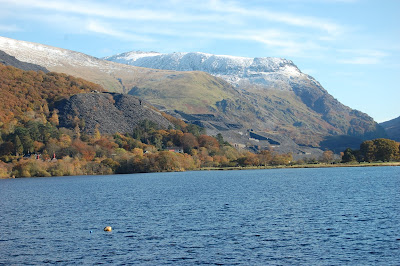 It was a beautiful and memorable day.  The following day, the sky was grey and overcast but we were not deterred - we are British and we dress for the weather!  So, we wrapped up well and went to Porth Trecastell, Cable Bay, so-called because the first telegraph cable from Anglesey to Ireland was laid from here.  This is one of my favourite places and we walked along the beach recalling the many happy days we have spent here - our children paddling in the shallow sea and poking about in the rockpools when they were small, the time we found a line of stranded jellyfish all along the shoreline, our twenty-ninth wedding anniversary when the sun beat down and I danced in the sea in my party dress, the time Storm Bryan washed up a dead leatherback turtle onto the beach, and watching wild waves and brave surfers.  This was not a day for taking photographs but we recalled many of the snapshots we hold in our heads.  Here is a photograph I took there in July 2017. 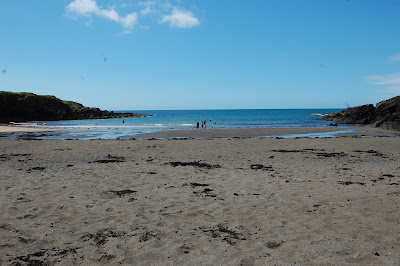 Then we moved on to another place we have visited before, St Cwyfan's, the Church in the Sea.  Of course, the church was not built in the sea, it was built on the land in the twelfth century but the sea has eroded the land around it and would have taken the land beneath it too had a protective wall not been built in 1893 after some of the graves fell away.  I think the church looks as if it is perched on top of a hatbox and when the tide comes in, it is completely cut off.  I have walked along the causeway at low tide and climbed the steps up to the church, but this was not the day for that.  The wind had become bitter and our visit was brief but rather wonderful. 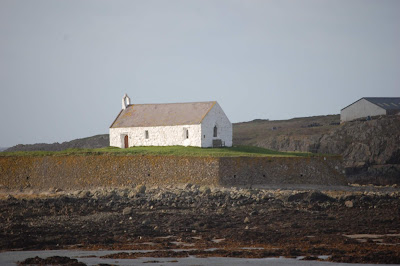 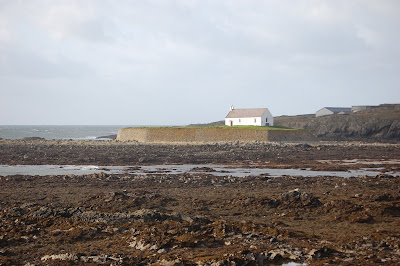 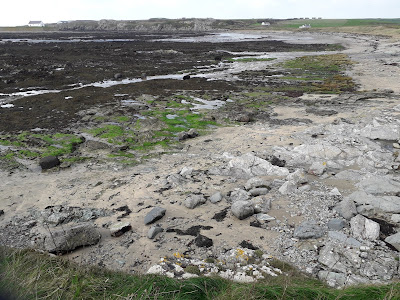 Here's what it looked like when we were last here on Valentine's Day in 2012. 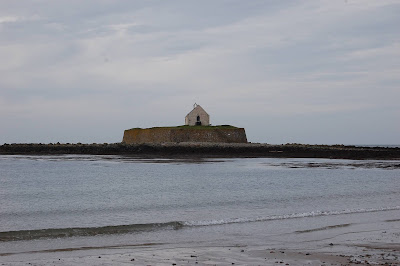 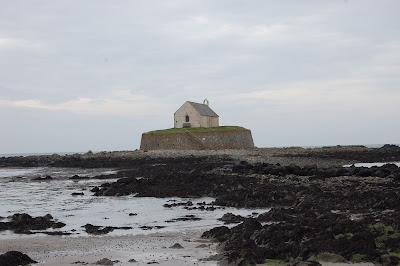 It's a special place.  Occasional services are still held there, including weddings.
Thank you for bearing with me.  I feel much calmer now, more ordered.  It's 7.45am and time for my day to begin.  I plan to be back here again before Christmas, hopefully at a more civilised time of day.  I hope things are going well for you.
See you soon.
Love, Mrs Tiggywinkle x﻿
﻿
Posted by Mrs Tiggywinkle at December 18, 2019