On The Seventh Day of Christmas

Hello!  Thank you for calling in, and congratulations on making it through to the other side of Christmas, whether you celebrated it or not.  I have just enjoyed two very therapeutic, restful days which have put me right back on track after the frantic pace of the last couple of weeks and it feels good to be back here again.  Lots of potential blog posts are swirling around in my head and I need to untangle them slowly and thoughtfully so in the meantime, I thought I'd share with you some of what I've been doing since I was last here.  First of all, however, I'd like to show you how my Advent Calendar Nativity set looks now that all the doors have been opened. - 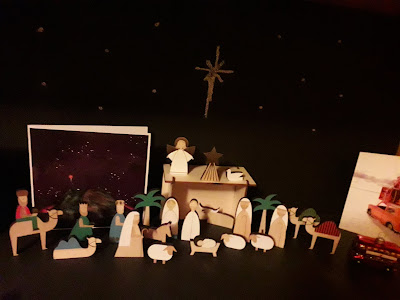 I love it.  However, the figures are prone to falling over if you sneeze/walk past/breathe which is a bit tiresome, although they are happier now that I have moved them off the mantelpiece onto a shelf in the corner of the room, so next year I am planning to start them off on the shelf and put a tiny piece of blu tack on the bottom of each one.  I'm not usually keen on having shepherds and wise men in the stable at the same time and prefer the magi to arrive at Epiphany but I decided to allow them to show up early this year and join the melee.
So, what have I been up to?

Wrapping
I wrapped up fifty-three parcels, I think, so it's a good job that it's a task I enjoy.  I have always liked prettying up my parcels with ribbons and bows but like many people, this year I have been more aware of the wasteful consequences of that so I eschewed much of it and simply  used nice wrapping paper - the kind which can be recycled, sans glitter or foil - and fabric ribbon.  I did use some villainous sticky tape but I am planning to reduce that next year.  I think my favourite parcels were these gift bags made with paper and glue  (I used a Pritt Stick) and fastened with fabric ribbon, all reusable and then recyclable. 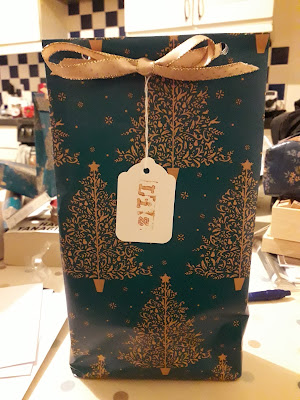 Lighting
I often describe our house as "tealight-tastic" at this time of year.  Every evening we light a string of tealights on the mantelpiece in containers made of glass, pottery and metal, the joy their light brings me being worth far more than their cost.  There's a pillar candle to light too, and Christmas tree lights and, on cold evenings, a fire.  In fact, on special days we light the fire even if we don't need its heat because we love its company.  The weather here has been very mild (and mostly wet) so our bodies could have managed without the fire but I don't think our souls could. 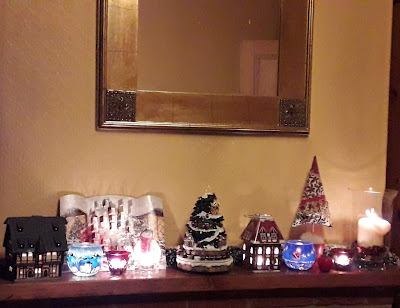 Feasting
Our Christmas fare has been quite modest really.  There has been no cake at all, barely any chocolate and only a few mince pies.  There was pudding on Christmas Day and Boxing Day but not at any other time.  However, on Christmas Day the Best Beloved and The Mathematician cooked up a magnificent feast: roast goose, stuffing, pigs in blankets, roast potatoes, roast parsnips, mashed swede, red cabbage and steamed broccoli, carrots and peas with gravy.  It was all perfectly cooked and after a little rest we enjoyed Christmas Pudding with brandy cream. 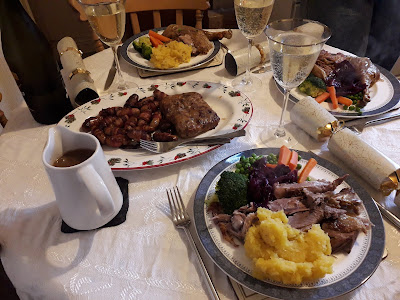 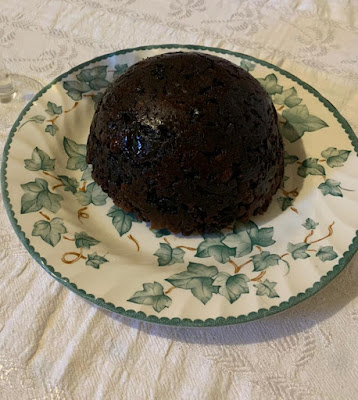 My mother has made the family's Christmas Puddings for more than fifty years.  They are always made in a batch and when I was a child we ate them on Christmas Day, Easter Day and either May or August Bank Holiday, leaving one to be served at a dinner party.  Now, there are none for the rest of the year as my sisters and I claim them.  This one was too big for three of us to finish at one meal so I cut the remaining pudding into sections and pressed them into my smallest pudding basin, as I saw Mary Berry suggest on the television.  I covered it with new pieces of baking parchment and foil, secured the covers with string and took the pudding to The Teacher's house the following day.  After steaming, it turned out like this and we were delighted.  A further four portions were greedily enjoyed, with a little sadness that we won't be enjoying it again for another year. - 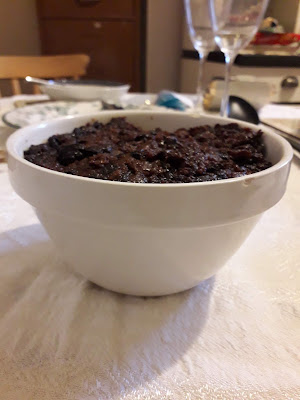 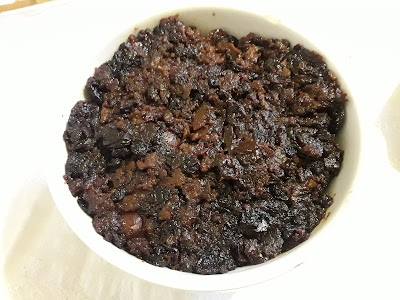 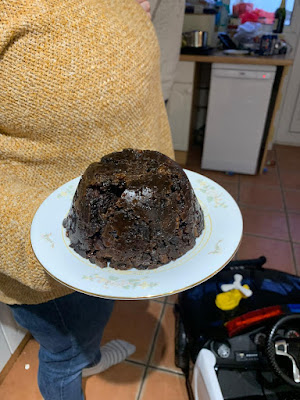 Reading
I knew that there wouldn't be much time for reading in December so I picked some easy books.  I've been dipping into Nigel Slater's The Christmas Chronicles since the end of October and enjoying it very much.  I read The Christmas Mystery during Advent last year, one little chapter every day of December until Christmas Eve, and I did the same again this year.  Both of these books helped to buoy my festive spirit.  The third book I chose was one I first read more than forty years ago when Puffin books cost 20p, a serious children's book by Barbara Willard called A Cold Wind Blowing.  I wanted something snowy, seasonal and not at all taxing and my first thought was Laura Ingalls Wilder's The Long Winter but when I looked at the group of her books on my shelf I discovered that I don't own that one, I must have borrowed it from the library.  I thought that A Cold Wind Blowing might fit the bill but the cover is deceptive as it's not a winter story, although there is a chapter about the twelve days of Christmas, and the titular wind is a metaphoric wind of change as the Reformation takes hold in England in the sixteenth century.  However, I enjoyed it nevertheless. 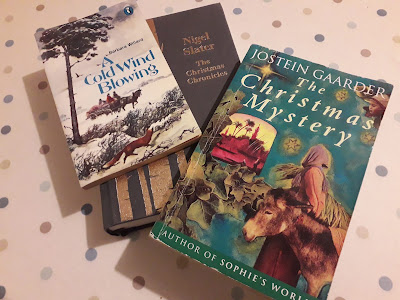 Watching
I rarely go to the cinema, in fact I haven't been since Boxing Day last year, but at this time of year The Mathematician and I have taken to going together and this time our choice was... Frozen 2!  That may have surprised you.  I enjoyed it unashamedly, although I remain horrified that a cinema ticket costs more than £12.  On the television I have also watched Some Like It Hot which is one of my favourite films. Marilyn Monroe is luminous in it and her dresses are practically indecent.  Nobody's perfect.  The Best Beloved and I really enjoyed the three-part drama A Christmas Carol, even though it was so different from Dickens' novella and I can be a bit of a grumpy purist, and on Christmas Day I loved Call The Midwife and Gavin and Stacey.  However, the best thing I have watched was Les Miserables on the stage at Wales Millennium Centre in Cardiff, which even brought tears to the Best Beloved's eyes. 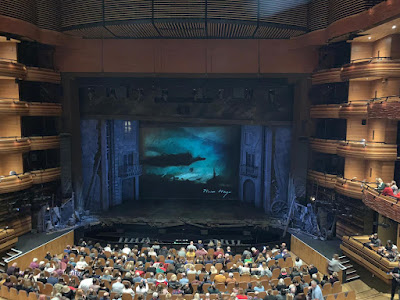 Gathering
The week of Christmas was bookended by visits to South Wales where my family gathered firstly to celebrate a twenty-first birthday and secondly to celebrate Christmas, as we do every year.  One of my nephews always makes a gingerbread house to share (isn't it a shame to demolish them when they look so pretty?) so last year, when I saw the biscuit chandeliers on the Great British Bake Off, I challenged my sister's family to make a gingerbread chandelier for us.  She wasn't able to do it last year but this year, her nineteen year-old son wowed us with this thing of beauty. - 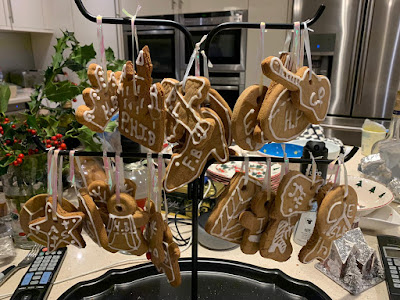 He had made and decorated a biscuit for each of us, twenty-two altogether, and each was personalised.  There was an acoustic guitar for an acoustic-guitar-playing cousin, an electric guitar for an electric-guitar-playing brother, a rugby ball for a capped cousin and a sailing boat for a sailing cousin.  Grandpa had a castle because he is the king of the castle and Grandma had a crown because she is the queen.  An aunt who "is Imelda Marcos" was presented with a gingerbread shoe.  For me he had made a star because he had seen my Advent Nativity set (on Facebook) and thought that its star was too small and insignificant.  He had iced two tiny crosses onto it.
At the end of Call The Midwife on Christmas Day, Vanessa Redgrave's voiceover told us, “Christmas is not a competition but the prize itself, a gathering and a sharing of the things that matter most. It is of no consequence whether we’re the biggest or the brightest, whether we’re the strongest, the bravest or the most inclined to win.”  Christmas is a place where a guitar, a rugby ball, a sailing boat, a shoe and a star can gather together and share our

memories, traditions and the ties that bind us together - and I am well aware that this is not everyone's experience, but this year, Vanessa spoke for me.
And now it is New Year's Eve.  The Best Beloved and I will stay in with some party food, some fizz, a fire and Jools Holland's Hootenanny on the television. We will drink too much and kiss each other at midnight and stay up ridiculously late.  Tomorrow morning we'll have breakfast in bed and watch the New Year's Concert from Vienna, as we always do. See you next year.
Happy Christmas.
Love, Mrs Tiggywinkle x
Posted by Mrs Tiggywinkle at December 31, 2019