Rainbows In The Clouds

Hello, thank you for popping in, you are very welcome here and I hope you enjoy today's witterings.  The sun is shining here today and my washing is flapping on the line while I hide away in the cool to write this post, with all the windows open upstairs.

I'm going to backtrack for a bit, back to March.  The prime minister gave his first televised press briefing about coronavirus on Monday 16th March, by which time the school in which The Teacher works had already closed - it's a special school and many of the pupils are extremely vulnerable, clinically, so the headteacher had made the decision early in order to protect them.  There was plenty of work for supply teachers in mainstream schools as so many of the staff were staying at home, either because they had symptoms of the virus themselves or because somebody else in their household did, so the Best Beloved was busy but he wasn't at all surprised when the announcement came that all schools should close on 20th March.  When he came home that evening we didn't know when he would next have any work (and we still don't) or when he would next have any income.  Mothering Sunday was to follow two days after this and the prime minister had asked us not to visit our mothers, households were to stay separate in an attempt to prevent the spread of the virus.  I felt anxious about the future and quite bleak and I decided that I needed to do something positive to raise my mood.

During this last week of term there was a call to put images of rainbows in our windows so that children who were going out for a daily walk with their parents could count them, giving them something cheerful to do on those walks.  A woman in Telford had seen that this was happening in Australia and started spreading the word over social media and soon those rainbows were everywhere around here.  The Teacher and Tom Kitten drew one in their front window and I decided that I wanted to decorate my window with rainbows, too.  This was all before the rainbow began to be used as a symbol of support for the NHS, it was simply something colourful and cheery to lift our spirits, although I couldn't help remembering the story of Noah's Ark in which the rainbow is a symbol of God's promise that life on earth would never again be wiped out by a flood.  So on Mothering Sunday, rather than seeing my little family I went to a craft shop and bought seven sheets of card, one each of red, orange, yellow, green, blue, indigo(ish) and violet.  I had noticed that lots of people didn't know the colours of the rainbow but I know that Richard Of York Gave Battle In Vain and I'm a rainbow pedant.  That evening I cut out eighty-four hearts and stacked them into seven neat little piles.

The following day I strung the hearts together with cotton thread and sent the Best Beloved up the ladder to hang them in front of the window.  Then I took a large wooden heart, a couple of tester pots of paint and some children's paint sticks and chalk out of the craft drawer and painted a centrepiece.  I thought that if I used chalk, I could change the word in the centre sometimes but in fact, it still says "Hope" because that is still my watchword.  The great thing about this little project was that not only did its creation cheer me up but its existence continues to bring me happiness.  Every morning when I open the curtains I smile as those colourful hearts twirl and dance in the air.  I can't possibly feel gloomy when there are forty-two brightly coloured hearts in my window. 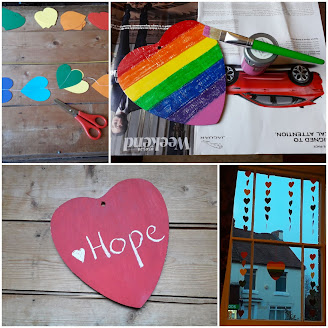 Soon, crocheted rainbows began appearing in windows too and in the middle of April I received a request from a good friend: could I make a crochet rainbow for another friend of hers, a hospital staff member who really wanted one and was sleeping away from her family while she was awaiting Covid-19 test results?  I couldn't refuse, could I?  So I cast around the internet to get some ideas and found the the Rainbow of Unity at Kerry Jane Designs.  I liked the pattern but I didn't like the pompoms so I kept looking and came across Vicki's Rainbow of Hope.  I did like all those beads dangling beneath her rainbow, and I had plenty of beads left over from last year's Christmas projects, so I brought the two patterns together and made this. - I love, love, LOVE it.  I sent this photo to a group of three friends and my daughters and within five minutes I had been asked to make six more!  I had plenty of yarn and beads so I carried on and I saw a pompom-bedecked rainbow online that I really did like so I embellished one of mine in a similar way.  I used this photo on my Facebook account and people asked if they could buy a rainbow.  I was a bit stunned. 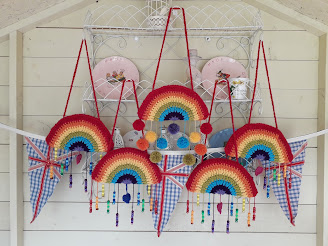 At this point I took stock.  I was running low on yarn and beads and I would need to buy more if I agreed to these requests.  I worked out that each rainbow cost £1.25 in materials and five hours of my time and while I was happy to give the time - we were in lockdown and I like doing things which make other people happy - I didn't want to be out of pocket.  One friend, a good needlewoman, offered to make me some fabric face masks in return for a rainbow and I was very pleased by this creative swap.  So, I explained to my potential "customers" (get me!) that while I wasn't selling rainbows, I would need to cover my costs at £1.25 per rainbow or payment in kind.  The response has been amazing: one person has paid £1.25, one paid £5 for two and I have also received, as well as the face masks, chocolates, jam, a plant for the garden, seeds, a bag of yarn oddments, tea, pamper products, biscuits, shortbread and cakes.  My friends have been SO generous. The bartering economy is fab!  I am currently making Rainbow No.21 and the Best Beloved, who is usually indifferent to such things, has asked me if I am going to make one to stay in our summerhouse!

I shall leave you with this quote from Maya Angelou, "God put rainbows in the clouds so that each of us - in the dreariest and most dreaded moments- can see a possibility of hope."