Hello, thank you for calling in, it's good to be here.  The weather here has been so unpredictable this week, it's extraordinary.  On Tuesday morning I was sitting in the sunshine counting the butterflies on the buddleia (11 small tortoiseshells, two red admirals, two small whites, a peacock and a comma) and in the afternoon I was trapped in the summerhouse as it rained cats and dogs.  Yesterday was warm, sunny and breezy, a perfect drying day, and today we woke up to pouring rain and a wind so strong that I had trouble opening the door!  I hope you are all safe and dry.

When lockdown began The Teacher decided that as she was saving money on petrol and her children's usual activities, she would spend some of those savings supporting small, independent businesses.  She has bought shoes from two independent children's shoe shops, a t-shirt for Tom Kitten from a local seamstress who makes children's clothes, books from an independent bookshop, a small keg of beer from a pub which is owned by a local brewery and online baby and toddler music classes.  She has asked me to tell you that she spent more on some things than she ordinarily would, £19 for the t-shirt and £46 for a very small pair of sandals, but felt that she could because she and her husband are both in secure employment and she was saving money on petrol and nursery fees. 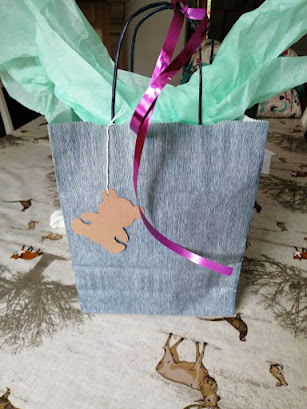 I love her for this, for her compassion and willingness to look beyond the needs of her own little family and think about other people whose incomes had been hit hard by the pandemic, and so I decided that I would buy from small, local businesses where I could, too.  My first attempt at this was at Easter when I saw that a bed and breakfast business which had been closed by the pandemic was offering to deliver Easter cream teas.  I contacted them and the friendly owner said that she would deliver to my area and the Easter tea would comprise homemade jam, cream and scone with a strawberry tart, with napkins and tea bags, all dressed prettily.  The price was £8 per person and although I would never normally do this, I ordered our tea for Holy Saturday.  The Best Beloved loves a cream tea (actually, he just loves cream) and I wanted to surprise him with a treat.  Come the day, I hovered near the front door just before 2pm, the appointed time.

I had to hover for more than an hour before our tea arrived and this is what the owner handed to me. 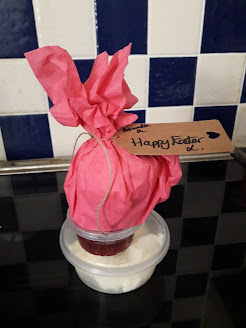 There were no strawberry tarts, no pretty napkins, no tea bags.  I asked if there was something else and the owner looked at me quizzically and said, "What?"  I replied that she had said there would be cake or strawberry tarts and she said, "Oh, I gave that to somebody else."  She said that she would go home and get me something else and as she went through the gate she called back, "Eat that today and I'll come back tomorrow."  I had been expecting a special treat and I felt really let down, especially when I opened up the package and found these scones, which were not large, in fact one was decidedly small and overcooked, the one the baker would usually eat herself because she wouldn't serve it. 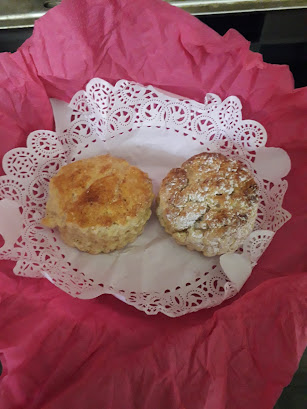 The following day, Easter Day, she redeemed herself slightly when she brought us this, especially as the cream was clotted, the Best Beloved's favourite, rather than whipped as we had received the previous day.  I put a £1 coin in the box to give some scale.  Those tiny cakes really were tiny, one or two mouthfuls each and although the meringue was delicious, the other was only a piece of vanilla sponge with cream piped on top. 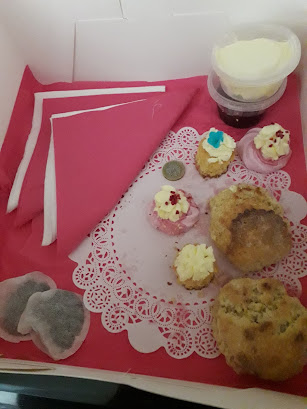 I still thought it was poor value for £16.  I see that her standard cream tea is now £5.50 per person and includes two scones rather than one, but we shan't be troubling her again.  She didn't even apologise.

My May efforts at supporting local businesses were more successful.  I discovered that the owner of a nearby yarn shop was offering free delivery so I rang her, paid over the 'phone with my card and the wool was on my doorstep the following morning, safely wrapped in plastic.  I was delighted.  There is a little cafe in the park which had to close but they opened up one Friday evening in May to sell burgers and even though a burger wouldn't be my first choice, we ordered in advance and collected them because their food is always good quality - and because we wanted to give them some income.  This time we definitely weren't disappointed.

In June, I ordered some cards from a local artist and printmaker.  They are so beautiful that I don't really want to send them to anyone so I ordered two sets so that I could keep some for myself!  When I wanted summer plants for the garden we avoided the big garden centres and went to a small independent nursery.  I was nervous about that because I hadn't been in any retail establishment for three months but it was well-organised and I felt safe.  We also bought some beer direct from a small local brewery which is still in our cellar as we are saving it for a special event at the end of this month, but I really don't know how I have kept it out of the Best Beloved's clutches all this time and he's already thinking of buying some more. 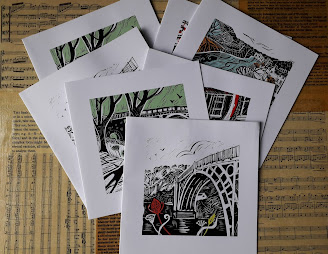 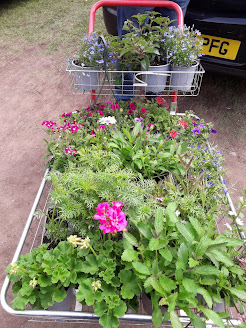 In July I bought some potions from a friend who is a Body Shop At Home consultant.  I've used some Body Shop products since the 1980s and I was thrilled when my friend started her business as the products are cheaper than they are in the shops, I don't have to make the trip to the horrible shopping centre as she delivers it to my door and she can make some income from it.  I also ordered a canvas from a young artist and designer, a girl who I have known since she was four years old, who turned one of the Best Beloved's photographs into a painting.

Have you seen that sign which does the rounds on social media which says that if you buy from a small business, an actual person does a happy dance?  I like to think that I have made a few people dance over the last few months, although I know that at least two of the businesses which my daughter and I have supported have now folded.  I appreciate that we need the big corporations too but I don't want to shop in a retail park or high street where there are only branches of large chains, where everything follows the trend and looks the same, where everyone drinks fancy coffee and nobody serves decent tea.  Our household income isn't large but I can make choices, I buy my groceries in one of the large supermarkets but I can choose a free range chicken and make it last for three meals rather than a battery broiler and I can buy cards and bookmarks from an individual who loves her products and cares about her customers enough to wrap their purchases in tissue and ribbon before posting them out.  That picture at the top is how Tom Kitten's new shoes were delivered to his house, complete with a free activity book, the day after his mother ordered them through Facebook.

I was very disappointed by those scones but the experience hasn't deterred me from buying from other independent businesses and I plan to keep on making people dance where I can.