Hello, thank you for dropping in.  I had the most wonderful weekend: I went to a family party, held to celebrate the 21st birthday of a nephew.  A carefully managed invitation list meant that we fell just within the thirty person limit on garden gathering numbers and double vaccinations meant that there was a lot of hugging.  It was wonderful to be together again for the first time in more than eighteen months but there was also sadness as we were not all together: The Mathematician is still stuck on Guernsey and watching my sisters and cousins with all their children around them emphasised the black hole in my family.   Also missing were a significant aunt and uncle, kept away from the rest of us by illness, the elephant in the garden.  Apart from those absences, there was everything I love about our family gatherings:  lovely chat, reminiscence, music, singing, great food, plenty of fizz and a super duper cake.  I have been basking in a warm glow ever since, but it's time to come back down to earth.

"Craftivism" is a word I heard for the first time only a few months ago when I watched a documentary fronted by Jenny Eclair.  (I have a great soft spot for Jenny Eclair because before she became famous she came to my college and performed in the student union bar.  I had never seen a female comedian before and I had never found any comedian so funny before.  I completely connected and it was a revelation.)  Craftivism is a portmanteau of the words "craft" and "activism" and it's a form of gentle protest in which craft skills are used to advance social causes.  I have some basic craft skills and I always wanted to change the world so the documentary was right up my street.  Afterwards, I searched around the internet and found this website and its social media pages and I began to get a bit excited.

A couple of weeks ago we landed in Cervical Cancer Awareness Week.  Smear tests can prevent 75% of cervical cancers from developing but UK attendance rates are lower than they have been for more than twenty years and the campaign aims to address that and encourage women to book and attend tests.  Apparently, some women don't attend tests because they feel that they are not sufficiently "well-groomed" and the We Are All Smear Ready campaign addresses that myth in an attempt to overcome barriers caused by embarrassment and negative body image.  The campaign invites people to craft tiny pairs of pants and leave them in public places with an information label - at least, that's what has happened in the past, but for the last couple of years the craftivists have been asked to simply photograph their tiny pants and labels and share them on social media.  I decided that if Jenny Eclair could do it, so could I.

Cath Kidston (the company, not the person) sent me a letter a fortnight ago printed on very pretty paper which I immediately realised would make some lovely tiny pants and even better, the envelope was similarly patterned but its other side was red. 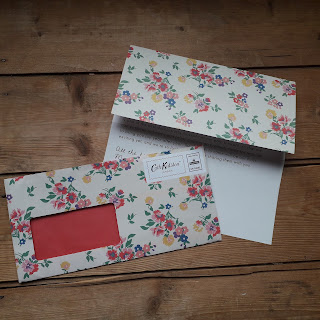 Armed with a template, scissors and glue I watched a Facebook makealong at the beginning of Cervical Cancer Awareness Week and fashioned that pretty paper into several tiny pairs of pants, decorating each pair with some lace and a teeny, tiny bow.  They were so pretty that I wished they were real pants that I could wear. 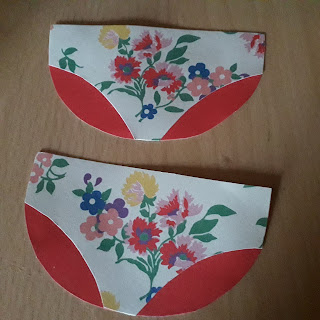 The following day I went out to meet some friends at a tea room with my tiny pants and a label in my bag.  At an appropriate moment I took my bag into the ladies' loo, trying very hard to look nonchalant.  I had intended to stick my handiwork onto the inside of the cubicle door, thinking that it would be the perfect place as women always sit down and look at the door when we are in a cubicle, but the door was made of wood and very beautiful and I was worried that my sticky tape would spoil its lovely surface so instead, I stuck it on the tiles (easily wiped) next to the mirror.  Luckily there was nobody else around so I was able to take my photo carefully before sauntering out of the door in a casual manner as if everything were perfectly normal and I hadn't just performed my first act of guerilla craftivism.  Inside, I was flying and I felt tremendously liberated. Go me!  I really did feel as if I should have been wearing sunglasses, a large, floppy hat and a turned-up collar.  I fully expected the staff to remove my tiny pants at the end of the day but if one person saw it before that happened, it was worth it (although I feel a tiny bit sad at the thought of those beautiful, tiny paper pants being thrown away).  Later that day I posted my photo on Instagram and another on Facebook and I know that people have seen them.  I did it, I raised awareness and I am a craftivist! 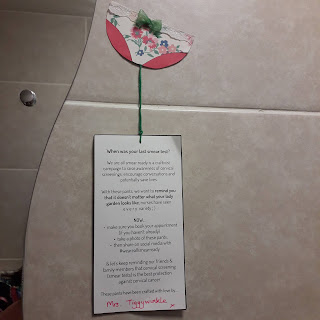 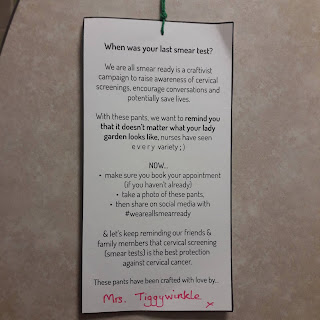 Craftivism: Making A Difference is still available on the BBC iPlayer if you'd like to know more. I'm working on my next project.