A Tale of Tents

Hello.  Thank you for dropping in.  Until today we have still been "enjoying" very, very hot weather.  It did rain for about an hour on Tuesday, lightly and softly, not enough really as we were able to walk barefoot on the grass afterwards very comfortably and today we have blustery winds and proper showers, real rain for the first time in almost nine weeks!  We drove to the South Shropshire hills on Wednesday and noticed how brown and parched they are.  We spent a night under canvas, except that tents aren't made of canvas anymore, and because we were so high above the level of the sea, I felt blissfully chilly after the sun had gone down - I had to don a fleece, and even my woollen wristwarmers!  I didn't mind at all.


I first camped as a Girl Guide, in good old Icelandics, six girls in each tent, and I took to it straight away (except for the toilet arrangements, obviously, because they were horrible).  I proudly bore my Camper and Backwoodsman badges so I know that you mustn't touch the inside of the tent if it's raining, where to stake the guy ropes  and how to storm lash them in the event of fierce weather.  I know that you shouldn't pitch your tent at the bottom of a hill and that when you strike camp, you tap the mud off the pegs and stack them to dry before you pack them away.  Oh yes, I am A Camper.
When I met the Best Beloved, he owned a small, two-man tent which he had used when he  travelled around France a few years beforehand.  We never used it together but when The Teacher was a little girl, her special birthday treat was to camp in the garden, just for one night, with her father.  Honestly, the man was practically a saint - her birthday is in August so those evenings were long.  "Daddy, I spy with my little eye something beginning with S."  "I give up."  "Stitch!"  There's really not much to see inside a very small tent.
Approaching The Teacher's ninth birthday, her grandfather rang me and said, "She's asked us to buy her a tent for her birthday.  I assume she means a play tent?"  Er, no.  She really wanted a tent in which the four of us could go off for camping adventures together and I had no idea that she had asked her grandparents to buy her that tent.  So being wonderful grandparents, they bought her a Lichfield four-person tent.  It was a cracking little ridge tent, easily put up and pegged in within half an hour.  There was one sleeping cabin, big enough to roll out four sleeping mats with a space at the end for our luggage.  The porch was big enough for a small table and chairs, a cooker and kitchen paraphernalia.  It was perfect for weekends away - our first trip was to The Golden Valley in Herefordshire and The Teacher was disappointed because it wasn't like Enid Blyton's Valley of Adventure! 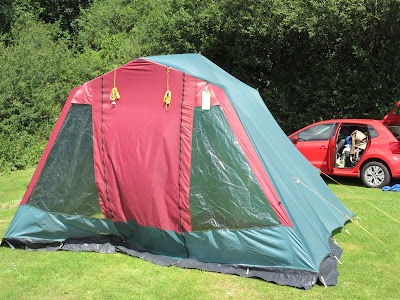 For over three years that little tent served us well and we had little adventures in England and Wales.  Then we decided that we wanted to travel a bit further and stay for longer than a weekend but the vagaries of the British weather (ha ha, she said ironically) meant that we would need a tent with a larger living space, big enough to spend time in together in wet weather and with space to dry clothes out.  Off we went to a recommended camping shop which had a large range of tents erected outside; the saleswoman told us that the staff erected all the new tents at the beginning of the season but only stocked the ones they felt were good enough to sell.  We chose a tent with a large, hexagonal living space and three low bedrooms leading off alternate sides, a Wynnster Satellite 12 - in theory it could accommodate 12 people but in practice, that would only be 12 very small children!  Each bedroom slept two adults or three children comfortably, on airbeds, so our girls were able to bring their friends on our trips sometimes or, as they grew older, take the tent away without us for teenage group holidays.  On one memorable occasion, twelve of us ate a meal inside, sat around tables, and we reckoned we could have fitted in another four!  With more than twenty guy ropes and more than sixty pegs it took ages to pitch but it was rock steady in a storm - one morning, on the edge of Wales, we woke up and saw that we were the only tent on the campsite that was still intact, high winds having at least partially demolished every other one there.  That really was a great tent and it gave us fabulous holidays from North Yorkshire to West Wales to Cornwall as well as weekend trips closer to home, but perhaps our happiest memories are of the Best Beloved's fiftieth birthday when we held a family camp for thirty people. 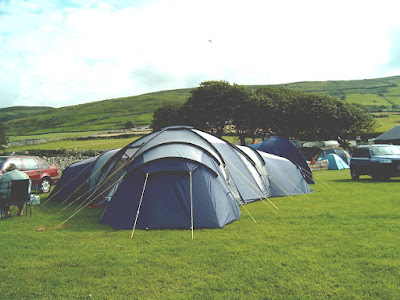 After twelve years the tent was showing signs of wear and so were we - we were old enough to be fed up of lying on the floor to wriggle our trousers on and off and we wanted to be able to stand up in the bedroom!  Our girls were older, too, and had their own tents and we realised that our future camping holidays were most likely to involve just the two of us so we downsized to...a six-person tent!  In practice, the large bedroom, which was alleged to accommodate four adults, sleeps two of us very comfortably and the second bedroom would sleep another one if necessary but we use it as a dressing room, giving us more space in our bedroom.  The living space, in front of the bedrooms, has lovely big windows (I really LOVE to sit inside and look out when it's raining) and is large enough for our children to come and sit inside with us - it turns out that we do not yet holiday alone, the girls come and camp with us in their own tents!  It's not as robust as the last tent but on the basis that we're unlikely to be camping in a gale any more, I like this one very much indeed and it seems perfect.  I also like the colour, much preferring the brown and green to blue and grey.  Like a car, the colour of a tent is really important, right?! 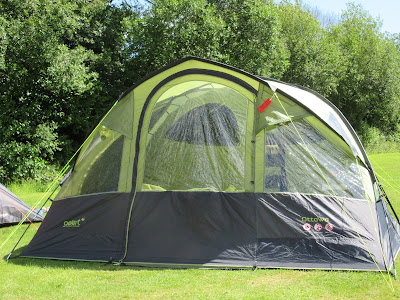 This tent is only four years old (and has only been to Cornwall, Anglesey, Somerset and Shropshire) so I was shocked  when, two months ago, the Best Beloved announced that he intended to buy a new tent.  To be absolutely honest, I might have been a bit grumpy about it, I certainly wasn't enthusiastic, but he had seen what he wanted and there was no stopping him.  His stated reason was that he wanted a tent with inflatable beams so that I no longer have to crawl inside and hold up the intersection of poles over my head for as long as it takes for him to insert the ends into their holders.  I thought this was just an excuse for him to play with new technology.
This week we went away for a night to try out the new tent.  It is very easy to erect: the Best Beloved pegged it in at the corners, I simply staked out two guy ropes and he pumped away and inflated the beams before completing pegging in and staking out.  It was quick... and it's humungous!!!!!   It is supposed to sleep six people but it's MUCH bigger than the last one and I reckon we could easily have a family sleepover for our Christmas Twenty-one.  I sat in the cavernous living space and didn't feel at all cosy.  I looked around for places to fasten fairy lights and bunting but I couldn't see any.  It's blue and grey.  I might still have been a bit grumpy.  However, as we sat outside watching the butterflies and dragonfly flit about and relaxed into our usual contented camping mode over dinner and a bottle of wine my lovely husband explained to me the real reason why he bought this tent: he is planning for the future, thinking ahead to a time when we'll be a bit too creaky to cope easily with a conventional tent and we might want camp beds rather than the airbed we currently use, hence the large size.  He is doing this because he really loves camping and wants to extend our camping years for as long as we can.  He is also thinking that in about three years time Tom Kitten can come with us, with or without his parents, so we can teach him to love camping, too, so we need a tent with enough space for him.  I really couldn't be grumpy any more. 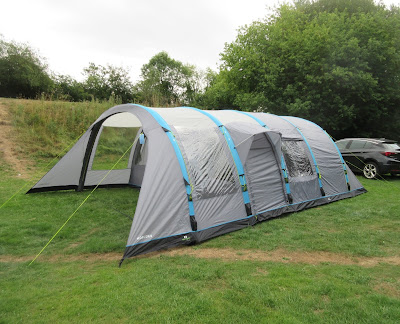 The Teacher has retired her Lichfield tent after twenty years of faithful service and we are passing our lovely brown and green tent on to her.
See you soon.
Love, Mrs Tiggywinkle x
Posted by Mrs Tiggywinkle at July 28, 2018