Hello, thanks for calling in.  You are very welcome here.  The weather news is that after that brief half hour of rain on 12th July, we have only had a few drops more.  The lawns and verges are yellow and dry, the flowers are dying and although the temperature has dropped by a few degrees, it's still hot, but we have become so used to sweltering that some people are actually feeling chilly!  I'm simply grateful.
I've had a rather emotional week.  The Best Beloved and I were married on 16th July 1988, his birthday, and earlier this year I said that I wanted to have a big family party to celebrate our thirtieth wedding anniversary.  However, he absolutely didn't want to have a party, so we went away by ourselves to Anglesey for the weekend instead.  The weather was kind, the heat tempered by cooling sea breezes.  I discovered that I like Llanddwyn Beach more in the autumn and winter than I do in the summer (although it's always beautiful), that the deafening guillemots were still on the cliffs at South Stack, that The Sea Shanty in Trearddur Bay sells wonderful ice cream and that Llanfair-yn-y-Cwmwd Church is kept locked, which was a shame because its setting is lovely and you know how much I like to visit an old church. 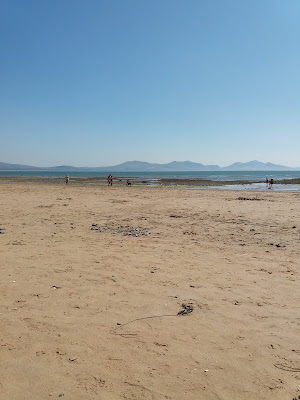 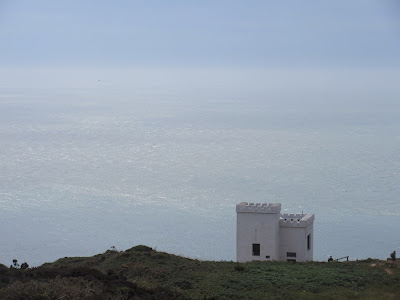 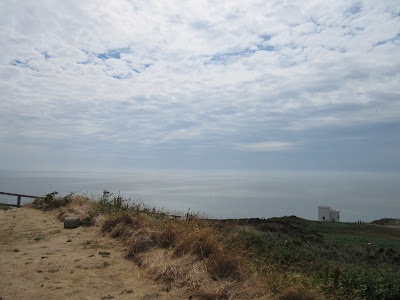 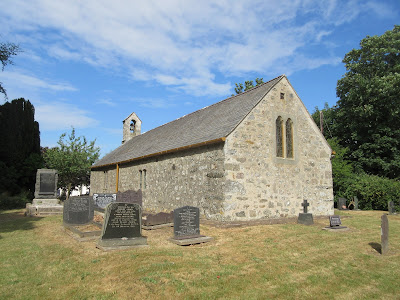 On Monday, the day of our anniversary, the Best Beloved went to work and I spent the day by myself, feeling a little forlorn.  A few cards plopped through the letterbox and some kind people sent us congratulatory messages.  I looked through our wedding albums and felt sad when I realised that twenty-one of the people smiling at me out of the photographs are dead now.  I went out to the delicatessen and bought some treats for a simple but special dinner.  The Best Beloved called in at the supermarket on his way home from work and bought some wine and some flowers and, after he had finished marking at 8pm, we celebrated, gently, over dinner.  I lamented the fact that we can't even find one day when both of our children are free to celebrate with us.  It was all very low-key. 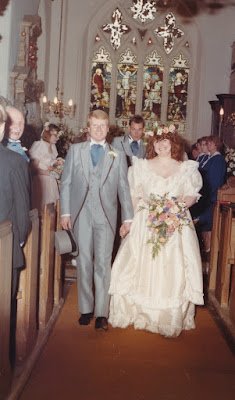 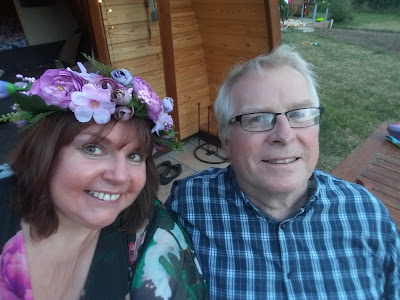 In fact, I thought it was rubbish and I was disappointed.  I wish we'd had a party.  There, I've said it.  We've put up with each other for thirty years, we've cared for and supported each other, for richer, for poorer, in sickness and in health, we love each other at least as much now as we did then and we've made a lovely family.  I think that's worth celebrating with a great big bloomin' shebang, but it's his anniversary too, and it really shouldn't be "all about me".  (But I wanted to feel like a princess!!!!!!!!!!)
On Thursday, the Best Beloved finished work for the summer.  There is no more work and no more income on the horizon until 24th September.  That's more than nine weeks away.  We have savings so we won't starve and I don't really need to feel as anxious about it as I do, but I like income!
Friday was a wonderful day and it was all about The Mathematician: we packed her sister and Tom Kitten into the car and drove to Loughborough University for her graduation.  The sun shone, the Red Arrows flew over the campus in formation and released their red, white and blue vapours in honour of the occasion, Lord Coe (he's the Chancellor) shook my daughter's hand and congratulated her and the place was full of happy people and their proud families.  When the Deputy Vice-Chancellor asked the graduands to stand and applaud their families because we had nurtured them through their lives to this day, I fought back tears as her whole life flashed before me.  My emotions were complex: pride, happiness, relief, hope, gratitude, wistfulness and something deep that I can't quite put my finger on.  The Mathematician was SO happy and that was a beautiful and moving thing to see. 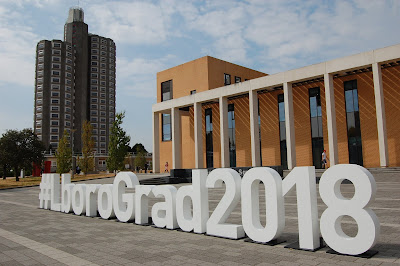 Yesterday was the first day of the school summer holidays and it usually arrives in this house with a fizz and a bang, but not this year because the Best Beloved went off to watch his second-favourite football team play a friendly match, which means that afterwards he goes to the pub with his friends for the evening before catching a train and then a bus home, by which time he has drunk a skinful and is no company at all for me.  During the football season he does this every other Saturday and I don't mind (much!) but HONESTLY, he went to his last match on 27th May, the World Cup began less than a fortnight later and lasted for four and a half weeks and now, six days later, he's starting again!  Is there no respite for the families of fans?  It doesn't feel like it.  I spent the evening feeling lonely and grumpy and I had to go and collect him from the station because he spent so long in the pub that he missed the train which would have enabled him to catch the last bus home - apparently, it wasn't his fault, but "the clock in the pub was slow".  Harrrrumph!

So, if you have read this far, thank you for putting up with me.  I'm sorry that I'm so miserable and very poor company.  Now that I've got all of that out of my system I can start to put it behind me and move onwards and upwards, apart from the happiness of The Mathematician's graduation, that was wonderful and I want to hold it in my head for as long as possible.